The Human Rights Council is the main intergovernmental body within the United Nations (UN) system responsible for “promoting universal respect for the protection of all human rights and fundamental freedoms for all” and for addressing human rights violations, including gross and systematic violations. The Council was created on 15 March 2006 by UN General Assembly (GA) resolution 60/251, which decided “to establish the Human Rights Council, based in Geneva, in replacement of the Commission on Human Rights”. The Commission had become discredited amid controversies over its membership and perceived politicisation. The establishment of the Human Rights Council was part of a comprehensive UN reform effort by former Secretary-General Kofi Annan outlined in his 2005 report, ‘In Larger Freedom: Towards Development, Security, and Human Rights for All’. He presented human rights, along with economic and social development and peace and security, as one of three ‘pillars’ on which to base the work of the UN. The Council, which comprises 47 members apportioned by geographic region, meets for three regular sessions per year (March, June and September) for a total of 10 weeks or more. It can also hold special sessions at the request of any Council member with the support of one-third of the Council membership. 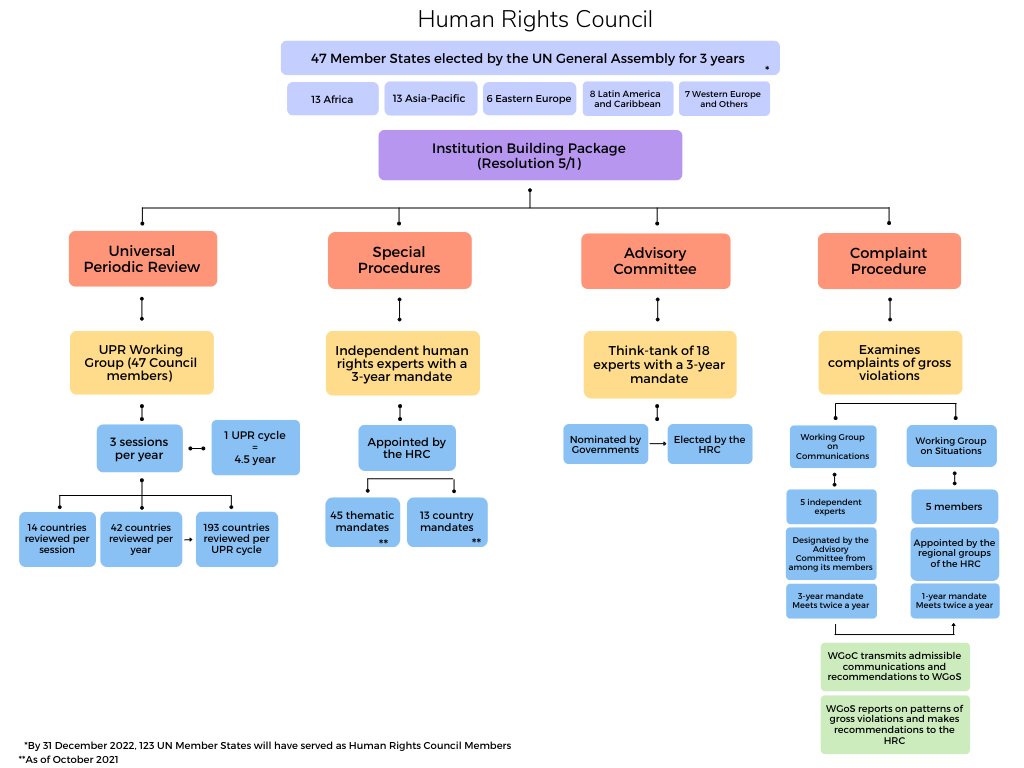 The Council’s first session took place from 19 to 30 June 2006. One year later, the Council adopted its ‘Institution-building package’ (resolution 5/1), which details procedures, mechanisms and structures that form the basis of its work. Among those mechanisms were the new Universal Periodic Review mechanism, the Advisory Committee and the Complaint Procedure – all of which report directly to the Council. The Council also assumed a number of mechanisms established by the former Commission of Human Rights including the Special Procedures.

Regular sessions of the Human Rights Council (three per year) serve as a forum for dialogue on pressing thematic and country-specific human rights issues facing the international community. A typical session includes a briefing by the UN High Commissioner for Human Rights on important human rights issues and situations, the presentation of UN reports on human rights promotion and protection, the holding of interactive dialogues with UN Special Procedures (based on their reports to the Council), the adoption of UPR reports for recently-reviewed countries, panel debates on matters of particular interest or importance, and the consideration (Council members only) of complaints brought to the Council’s attention under the Confidential Complaints Procedure (see below). The main output of a given Council session is a series of Human Rights Council resolutions drafted and negotiated by States and designed to take forward a particular human rights issue or agenda. Action is taken on such resolutions (adoption by consensus, adoption with a vote, or rejection) at the end of each Council session. If one third of Council members so requests, the Human Rights Council can decide at any time to hold a Special session to address human rights violations and emergencies (with either a country or thematic focus). Special sessions last for one day and allow States and other stakeholders to hear updates (for example by the High Commissioner, relevant Special Procedures mandate holders or Commissions of Inquiry) and present their views on the issue at hand. The session usually concludes with the adoption of a resolution.

For more detailed information, Universal Rights Group issues an outcome report after each Human Rights Council’s plenary session, as well as an annual review of the Council’s work (available here).

The Council maintains a Complaint Procedure that allows individuals and groups to report human rights abuses in a confidential setting. The goal of the procedure is to objectively and efficiently facilitate dialogue and cooperation among the accused State, Council members, and the complainant(s). A Working Group on communications and a Working Group on situations evaluate the complaints and bring them to the attention of the Council.

The GA resolution 60/251 formally established the Human Rights Council as a subsidiary organ of the General Assembly. The aforementioned resolution also ordered a review of the Council’s status by the GA within five years, as well as a review of its functioning and work by the Council itself. The Council completed and adopted its review in March 2011. Its findings were later confirmed by the GA in resolution 65/281. When adopting the outcome of the Human Rights Council’s review, member States agreed to maintain the Council’s status as a subsidiary organ of the GA. Additionally, they adopted several procedural modifications to the Council’s work, such as moving the start of its yearly membership cycle from June to January (thus moving Council elections from the spring to the autumn), creating an office of the Council President and establishing future review mechanisms.

Despite these efforts, the Council’s agenda kept inflating, as the increase of topics addressed by the Council was not matched by an increase in time and resources alloted to the Body [1]. As such it became clear that concrete and sustainable reforms were urgently needed. Discussions between States, notably through the Glion Human Rights Dialogues, and civil society’s effort to push for further improvements culminated in a one-day conference on 1 December 2017 on Human Rights Council Strengthening, organised by the Permanent Missions of the Netherlands, United Kingdom, Rwanda, Mexico and Latvia. The event brought together more than 130 representatives of States, civil society, and OHCHR to debate and present proposals to further strengthen the Council.

At the end of the conference and on the occasion of his appointment, then-Council President-elect, H.E. Mr. Vojislav Šuc (Slovenia) ensured that the strengthening of the Council would be one of the Bureau’s key priority for 2018. As such, H.E. Mr. Šuc initiated a process of informal open-ended consultations, guided by three sets of co-facilitators (Spain, Philippines, Rwanda, Chile, Fiji and Latvia), seeking to identify and secure agreement on a set of long-term measures to improve the efficiency and effectiveness of the Council. The process focused on three aspects: improving the annual programme of work of the Council, the rationalization of resolutions and initiatives, and the use of modern technology. The Bureau-led negotiations ended in the adoption of a modest Presidential Statement (PRST) entitled “Enhancing the efficiency of the Human Rights Council, including addressing financial and time constraints” on 3 December 2018, which contains nonetheless a number of positive steps, including moving from a one-year to a three-year programme of work (to strengthen transparency and predictability) and restructuring the annual programmes of work (to reduce the number of repetitive general debates).

Current Council President H.E. Mr. Coly Seck (Senegal) has ensured that he would continue the efforts made by his predecessors and take all necessary actions to implement the Presidential Statement. In February 2019 the President appointed five co-facilitators to carry out consultations on the implementation of the PRST and held a meeting in mid-June 2019 to discuss the outcome of the facilitation process.

In its 2006 resolution establishing the Human Rights Council, the GA stipulated that it should undertake a review of the status of the Council after 5 years i.e. whether it should remain a subsidiary Body or become a main Body of the United Nations. After completion of the review in 2011, the GA adopted resolution 65/281, deciding to maintain the subsidiary status of the Council and to consider again the question “at a time no sooner than ten years [2021] and no later than fifteen years [2026]”. While resolution 60/251 clearly indicated that the Council itself should undertake a review of its work and functioning after 5 years, in parallel with the status review of the GA, no such mention was made in the resolution requesting the 2021-2026 review. The absence of an explicit request from the GA has raised questions among delegations in Geneva as to whether any preparation and/or contribution should be made, what form this should take, and whether a potential contribution should be limited to questions of the Council’s status. Discussions, notably at the fifth Glion Human Rights Dialogue (Glion V) in May 2018 and during the Human Rights Council President’s retreat in October 2018 highlighted the wide recognition that ‘Geneva’ should be involved in the review of its status.

Earlier this year, Human Rights Council President H.E. Mr. Coly Seck invited States and civil society to participate in an informal consultation to share their views on whether the Council should contribute to the review and if so, what form this contribution should take. Although the initiative of an informal conversation was largely supported by member States, disagreements remain as to whether the review of the status should include the Human Rights Council’s ‘Geneva insight’.

For more detailed information on the 2021-2026 review, see Universal Rights Group’s policy report “Vision 2021: What is the General Assembly’s 2021-2026 review, and how might the Human Rights Council usefully contribute?”

For more detailed information on the evolution of the debates around the Human Rights Council’s mandate, see Universal Rights Group’s reports on Glion Human Rights Dialogues.

[1]Details can be seen in the letter of Michael Møller (former Director-General of the United Nations Office at Geneva) addressed to the Human Rights Council’s Bureau (August 2016).