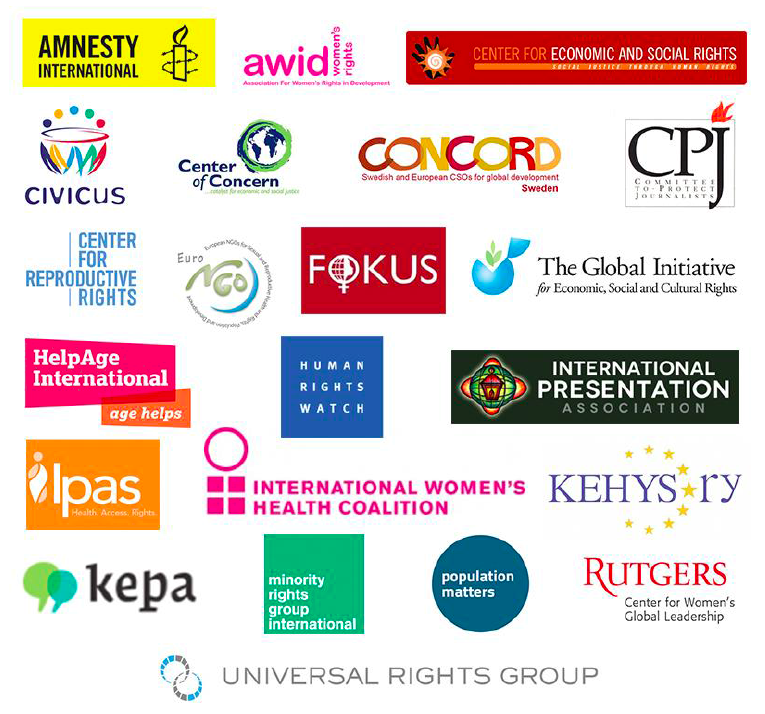 The Post-2015 Human Rights Caucus – a broad coalition of development, environmental, feminist, trade union and human rights organizations worldwide, which the Universal Rights Group is proud to be a member of – had produced the following response to the United Nations Secretary-General’s Report “The Road to Dignity by 2030: Ending Poverty, Transforming All Lives and Protecting the Planet” (The ‘Synthesis Report’):

“We warmly welcome the Secretary-General’s rallying call for a bold, universal, transformational agenda that leaves no one behind. As we move into the negotiations, it is imperative that Member States act with courage and ambition to shape a new sustainable development paradigm founded on the respect, protection and fulfillment of human rights.

Below, we highlight some key areas of the Secretary-General’s Synthesis Report  that we believe Member States can build on as they  begin the intergovernmental negotiations. We also  identify some issues that we believe the report  overlooks or underestimates, despite their long- established importance for enjoyment of human rights and sustainable development. Therefore, Member States should seize the opportunity to improve on these areas in the formulation of the final agenda.

We applaud the strong recognition throughout the Synthesis Report that human rights must be at the core of the new agenda, and that it must be aligned with – and not fall below – existing international law and standards (which includes human rights law).

“The agenda itself mirrors the broader international human rights framework, including elements of economic, social, cultural, civil and political rights, as well as the right to development”

The Secretary-General’s acknowledgement of the relevance of existing human rights law and standards is a common-sense, principled stance that we hope Member States will replicate in deciding the final agenda. We would suggest that any references to “existing obligations under international law” in the post-2015 Declaration or other outcome documents should explicitly mention human rights obligations. Positively, the report recognizes participatory democracy, press freedom, access to information, freedom of expression, assembly and association as crucial enablers and components of sustainable development. It is critical that the report’s explicit emphasis on accountable governance and civil and political rights finds inclusion in the final formulation of the agenda.

However, it will be necessary to go a step further and move from aspirational to operational. The Synthesis Report misses an opportunity to illustrate how previously-agreed and well-defined human rights obligations carry over into development in practice. For Member States moving forward, it is entirely possible to incorporate concrete proposals on how to realize human rights with respect to the development of targets and indicators, financing, means of implementation, monitoring and review of the agenda. (Some examples can be found in the previous statements of the Human Rights Caucus – see those from December 2013 and September 2014, and the Human Rights Litmus Test.) Several times in the report, the Secretary-General calls for going beyond measuring progress by GDP and economic growth. We wholeheartedly agree and suggest further that human rights enjoyment provides an important measure of “the degree to which [an economy] meets the needs of people, and… how sustainably and equitably it does so”. “Shared prosperity” is not a sufficient marker of success, and should be coupled with human rights realization as a way to assess progress on sustainable development goals – and yield insights into obstacles and developing inequalities. The way forward should be marked by serious consideration of current dominant macroeconomic and fiscal policies that undermine human rights and economic, gender and environmental justice.

The major novelty of the Synthesis Report was the “Six essential elements for delivering the SDGs”. In our opinion, this framing undercuts some of the strong and positive messages elsewhere in the report, as well as being divorced from the existing human rights framework. Therefore, we would urge Member States to focus more on how human rights standards support and flesh out the goals and targets identified by the OWG, and ensure that these are used to guide the design of indicators, implementation and monitoring mechanisms.

In particular, we are concerned that the “six elements” impose unhelpful silos and render certain crucial issues and groups less visible. In particular, the absolute imperative to tackle gender inequality in all its forms and realize women’s and girls’ rights is not adequately underlined in the report. Gender equality and the fulfillment of women’s rights are not acknowledged as essential structural components of sustainable development, nor as core human rights priorities in themselves, regardless of how instrumental they may be to economic prosperity. As numerous women’s rights advocates have noted (see the statement by the Women’s Major Group, for instance) several core elements of gender equality – including sexual rights, ending violence against women, redistributing unpaid care work, discrimination against LGBTQI persons, and comprehensive sexuality education – are either omitted entirely or suffer from watered down language that falls short of what the OWG proposed.

Here, Member States would be wise to cleave more to the OWG’s precedent in their integration of gender into the draft goals, in particular the stand-alone goal on gender which to an extent does address the structural barriers to gender equality. The final post-2015 agenda will need to mainstream gender throughout; take into account the gendered effects of climate change for example, or in establishing gender equality and women’s rights as guiding principles for the delivery of the agenda. Existing international human rights treaties (such as the ICCPR, ICESCR, and CEDAW, among others) and their monitoring frameworks, as well as international agreements (such as Beijing, ICPD, Vienna, and the UDHR) provide important normative and practical guidance for addressing barriers to gender equality.

A new paradigm of accountability?

We appreciate that the Synthesis Report recognizes the need for “a new paradigm of accountability” as a core component of the post-2015 agenda: “not one of conditionality or North to South, nor South to North, but rather one of all actors — governments, international institutions, private sector actors, and organizations of civil societies, and in all countries, to the people themselves. This is the real test of people-centred, planet- sensitive development.” This firmly reflects the human rights model of accountability, and would be a key step towards ensuring that States live up to their development commitments.

We also welcome that the Secretary-General lays out a framework for post-2015 accountability, at the national, regional and global levels. This proposal positively reflects the need to ensure national-level ownership and accountability for the SDGs, and Member States should build on this to create participatory, transparent monitoring and accountability mechanisms at the national level which are underpinned by a safe and free environment for civil society, and access to information. Accountability is impossible if these elements are not in place. To that end, the focus of one of the “six elements” on justice is a positive step towards building institutions that ensure accountability and respect for all human rights.

When it comes to accountability at the global level, we feel the Secretary-General’s proposals can be built upon and improved through a human rights perspective. Truly people-centered, participatory accountability at the global level will require a new approach (far more than just a ‘global component for knowledge sharing’), and at the very least a significant reform and opening up of existing institutions. We urge Member States to recognize and examine the role that existing human rights mechanisms, properly strengthened, can play in this process – and take human rights obligations into account in monitoring progress towards the SDGs, including monitoring cross-border impacts of policies. The Secretary-General’s emphasis on the need for regulation, safeguards and mandatory reporting for private investments in sustainable development is a step in the right direction, but more will be needed to ensure human rights are respected in all development processes. At all levels, the post-2015 accountability mechanisms must be robust and comprehensive enough to cover private sector actors, partnerships and IFIs as well as States, premised on full transparency and the right to information, and encompassing extra-territorial obligations.

We welcome the attention the Synthesis Report gives to the means of implementation, including financing. In particular, we applaud the recognition of the urgent need to tackle tax evasion and illicit financial flows. However, the Secretary-General missed an opportunity to introduce the all-important human rights framework into this discussion. The means of implementation (including financing) of the post-2015 agenda must be aligned with human rights standards and guided by human rights principles. This will ensure that finances are mobilized and allocated in the most equitable ways for sustainable development, at the national and international levels. This includes adequate, sustained and unconditional financing and support for women’s organizations, movements, grassroots activists and women human rights defenders, which is an absolute necessity to move towards gender-sensitive sustainable development.

As we proceed into the first session of inter-governmental negotiations, we urge governments to ensure that the design of the final goals and means of implementation is guided by international human rights law and built on a bedrock of human rights principles. As the Secretary-General says, the post-2015 framework does indeed provide a “much-needed opportunity to integrate the broader UN agenda…including human rights objectives”; Member States should seize this chance. The members of the Post-2015 Human Rights Caucus stand ready to assist in this landmark endeavor.”

EuroNGOs – The European NGOs for Sexual and Reproductive Health and Rights, Population and Development (Belgium)