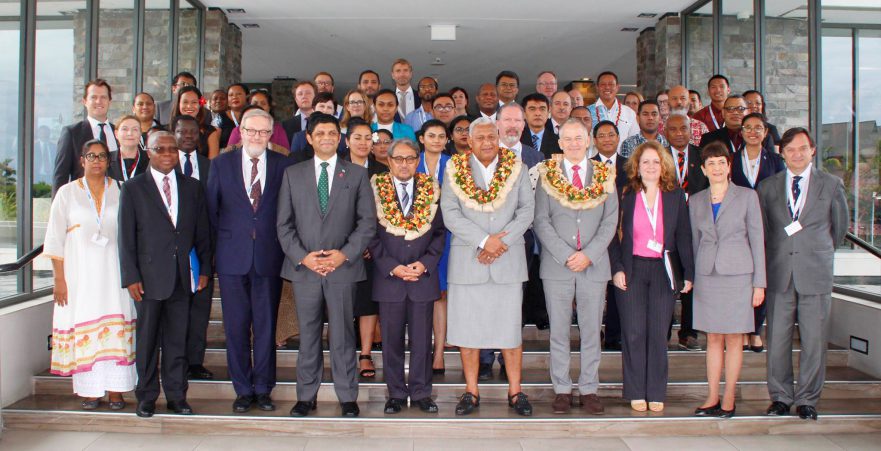 On 27-28 October 2016, the Universal Rights Group supported the organisation of a Convention against Torture Initiative (CTI) workshop for Pacific Island States in Natadola, Fiji. The regional workshop, entitled ‘Benefits of, and challenges to, the ratification and implementation of the UN Convention against Torture in the Pacific region: sharing experiences and building capacity,’ represented an important contribution to CTI’s goal of securing universal ratification of the UNCAT by 2024. The CTI meeting was organised in partnership with the Association for the Prevention of Torture (APT) and the URG.

The UNCAT was adopted in 1984 and today there are 159 States Parties to the Convention. Of the 36 States that have yet to ratify the Convention, many are Small Island Developing States (SIDS) and Least Developed Countries (LDCs); in particular, 9 (25%) are Pacific SIDS.

After an opening session featuring speeches by Hon. Mr. Frank Bainimarama, Prime Minister of Fiji, Hon. Mr. Aiyaz Sayed-Khaiyum, Attorney-General of Fiji and, H.E. Mr. Zeid Ra’ad Al Hussein, the UN High Commissioner for Human Rights, 8 of the 9 non States Parties from the Pacific (Kiribati, Marshall Islands, Palau, Papua New Guinea, Samoa, Solomon Islands, Tonga and Tuvalu); together with the 3 Pacific SIDS States Parties (Fiji, Nauru and Vanuatu); representatives of the governments of Australia, Chile, Denmark, Indonesia, Ghana, New Zealand, UK, and USA; the UN Special Rapporteur on Torture and URG Board member, Juan Mendez; representatives of OHCHR, UNDP and the EU; and assembled experts; discussed opportunities and challenges to ratification and implementation of the UNCAT. The Fiji event focused, in particular, on the human and technical capacity constraints faced by Pacific SIDS.

Other objectives of the meeting included:

– To understand perceptions about the costs and benefits of ratification and implementation of the UNCAT, and of deeper engagement with the international human rights system.

– To understand the challenges, especially capacity and technical challenges, faced by Pacific SIDS, in the context of the ratification and implementation of the UNCAT, and other core human rights conventions.

– To provide a space for State representatives (UNCAT State Parties and non-State Parties) and other stakeholders to share opinions on and experiences about UNCAT ratification and implementation, including the benefits of engagement.

– To provide a space for State representatives (UNCAT State Parties and non-State Parties) and other stakeholders to share information on common challenges and obstacles to ratification and implementation, and how those obstacles have been overcome, especially by other States in similar situations (e.g. other SIDS).

– To explain the steps towards ratification, what ratification would mean in practical terms, and how ratification and engagement with the UN Treaty Body system can support States in their efforts to prevent torture.

– To promote dialogue and cooperation among countries of the Asia-Pacific region and beyond on torture prevention.