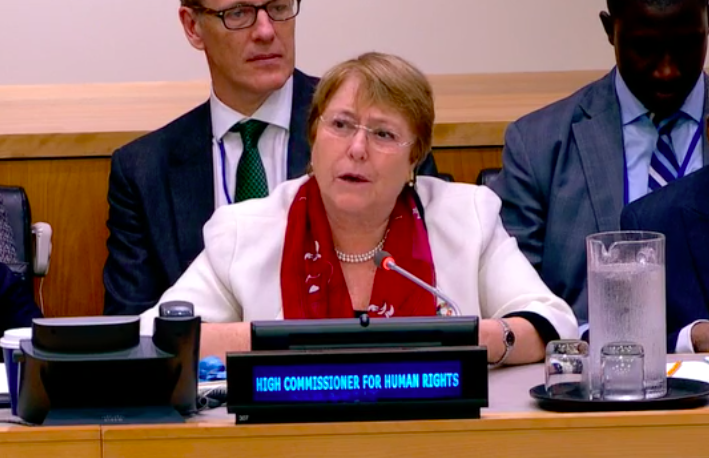 Newly appointed High Commissioner for Human Rights, Michelle Bachelet, gave a statement at a High-Level Event during the 73rd Session of the UN General Assembly, marking the 70th Anniversary of the Universal Declaration of Human Rights, “A Prevention Tool to Achieve Peace and Sustainable Development.” She said:

“Human rights are the interlocking elements that build resilient and confident societies – societies able to withstand and surmount threats, peacefully resolve disputes, and facilitate sustained progress in prosperity and well-being for all their members. Every step towards greater implementation of the human rights agenda is an act of prevention ­– strengthening the bonds between communities and reinforcing inclusive development and peace. Every step away from it tugs us down, towards suffering, injustice, hatred and conflict.”[1]

High Commissioner Bachelet added that human rights, as enshrined in the UDHR, is an idea that has mobilised peoples and has improved human life through “sustained development” and “conflicts prevented.” But she added that such progress has come under threat as the idea of human rights has come under attack, resulting in the erosion of norms and the undermining of international institutions.

The High Commissioner’s emphasis on human rights as having a critical preventative character and being inextricably linked to development and security, echoed her inaugural remarks at the 39th Session of the Human Rights Council: “Human rights express the core purpose of the United Nations: we can only attain peace, security and sustainable development for all societies when we advance the dignity and equality of all human beings.”[2]

In her opening address High Commissioner Bachelet grounded her approach to her new position in her lifetime experiences. Perhaps particularly cognizant of her predecessor’s style of calling out leaders, Bachelet emphasised that she appreciates the value of consensus and sincere cooperation, and that she plans to always listen to the concerns of states. However, she also pointed out that, as a former Head of State herself, she personally knows that “your people seek a common agenda: rights, sustainable development, and peace.”[3]

Bachelet also drew on her medical background in remarking on the value of human rights to sustainable development. She pointed out that “good doctoring is based on building resilience” and “human rights is a powerful medicine.” Promoting human rights and equality drives equal and sustainable economic development, it is in “building access to all human rights that society becomes stronger and more able to resist unpredictable shocks.”[4]

She referred to the 2030 Agenda and the Sustainable Development Goals as an opportunity for a greater integration of human rights objectives. She stated that “the Sustainable Development Goals will not progress without discussion of and progress on the so-called “sensitive” issue of human rights. I know this as a former Head of State and Head of Government: development must focus, above all, on the well-being and rights of the people.”[5] High Commissioner Bachelet noted the importance of integrating Treaty Body recommendations and the recommendations of the Universal Periodic Review and Special Procedures mandate holders into useful tools for states and UN country teams to adopt and apply.

In her address on prevention, High Commissioner Bachelet builds on her statement to the Council, reiterating that prevention can begin with building resilience into developing economies by ensuring human rights protections, and that human rights is a critical tool for the promotion and preservation of peace, building connectivity and serving as a preventative bulwark against violence. She suggested that in enhancing it’s preventative capacities the UN must consider early interventions and accountability in looking to prevent war and mass violations: “the power of justice can deter and prevent even the worst violations and crimes.”[6]

Prevention and the Human Rights Council

High Commissioner Bachelet’s emphasis on prevention links with Secretary-General Guterres’s own priorities, both at the secretariat, and in speaking at the 37th Session of the Human Rights Council, where he stressed the importance of human rights implementation for his prevention agenda, and the realisation of SDGs.[7] During the following session of the Human Rights Council, Colombia, Norway, Sierra Leone and Switzerland tabled a resolution on “the Contribution of the Human Rights Council to the prevention of human rights violations.” Resolution A/HRC/38/L.19/Rev.1 was ultimately adopted by vote (as some States raised concerns that such a resolution would be implemented as an “responsibility to protect” initiative). Following the introduction of the resolution, the Council discussed building national human rights resilience to prevent conflict and the use of the Council as an early warning tool to dialogue with State and regional actors at the early stage of violations.[8] While an important step, members of the Council disagreed on how to operationalize the resolution.

The Human Rights Council does have a mandate to respond to human rights violations as established by operative paragraph 3 of General Assembly resolution 60/251. This includes a mandate to prevent violations from happening in the first place, and to respond promptly to emerging crises. Starting in 2017, the Universal Rights Group has worked on implementing a project that has the broader objective of promoting the operationalization of the Human Rights Council’s prevention mandate. URG’s Glion Human Rights Dialogue in 2017 also focused on “operationalizing the Council’s prevention mandate,” resulting in a subsequent report.

The new High Commissioner’s emphasis on human rights work, including the use of UN human rights mechanisms, as a critical component to sustainable development and peace and security, comes at a time at which human rights, as she points out, can be considered more of a “sensitive issue” than critical tool. Her articulation of human rights as building in resilience to development and security objectives, dovetails with the Secretary-General’s emphasis on prevention. Both the High Commissioner and the Secretary-General highlighting the potential of the Council and its mechanisms to contribute to prevention, adds to the recent Council resolution in creating an opportunity to make prevention strategies at the UN more proactive, more human rights oriented, and making better use of the all available UN tools.