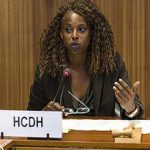 The commemoration of the fifteenth anniversary of Switzerland’s membership of the United Nations presents an excellent opportunity to recognise the strategic importance of the United Nations Office at Geneva (UNOG). Importantly, the Human Rights Council (HRC), the principal UN intergovernmental body mandated to promote and protect human rights globally, and the OHCHR tasked with its support, are both based at UNOG.

Coinciding with its tenth anniversary on 13 June 2016, the HRC convened its first universal meeting. On this day, all 193 Member States of the United Nations were present at the HRC in the aptly-named Human Rights and Alliance of Civilizations Room (Room XX) in Palais des Nations, Why was this a landmark for the Council? Because two categories of States, namely, the Least Developed Countries and Small Island Developing States – that face many challenges in participating in the work of the HRC – were all present despite of the challenges they must overcome to be able to participate.

One of the greatest obstacles is the vast distance to Geneva for most of the LDCs/SIDS. The huge travel time, resources required for travel, and other expenses, are real impediments to their participation in the work of the HRC. It is important to bear in mind also that 12 of the LDCs/SIDS do not have permanent missions in Geneva. Those without representation find it difficult – if not impossible – to participate in the Council sessions.

But challenges are not insurmountable. In March 2012, the HRC unanimously agreed to establish a Voluntary Technical Assistance Trust Fund to Support the Participation of Least Developed Countries and Small Island Developing States in the work of the Human Rights Council (resolution 19/26). The LDCs/SIDS Trust Fund – administered by OHCHR – provides essential funding, capacity-building, and training to support the participation of these States.

The Trust Fund was key in ensuring participation of many LDCs/SIDS in the June 2016 universal meeting at the HRC. As noted by H.E. Ambassador Alexandre Fasel, former Permanent Representative of Switzerland, speaking to these delegates said, ‘Your presence in Geneva made possible by the LDCs/SIDS Trust Fund, is in my opinion a truly remarkable contribution to the tenth anniversary.’

The LDCs/SIDS Trust Fund: how it works

Michael Møller, Director-General of ONOG makes clear that, the LDCs/SIDS Trust Fund is ‘a very important tool enabling all of us to benefit from the interaction here in Geneva with Member States and people from all the corners of the world.’[1]

The Fund has facilitated a unique partnership among the OHCHR, the HRC, and donor and beneficiary States.

The Trust Fund gives advance notice to LDCs/SIDS and their regional organisations about upcoming HRC sessions. To access the Fund, LDCs/SIDS submit nominees to serve as delegates at a session of the HRC or to pursue a fellowship. Priority is given to LDCs/SIDS that do not have a permanent mission in Geneva. Delegates are given pre-LDCs/SIDS e-learning training on the HRC and applicable legal instruments and the HRC mechanisms. They also receive induction training upon arrival in Geneva.

The Trust Fund emphasises universality of the HRC and is a ‘Geneva Gender Champion.’ Out of 86 Delegates supported, 51 (59%) were women. This is a wonderful standard, which all human rights stakeholders should be proud of and work to sustain.

What it takes to get the LDCs/SIDS Delegates to Geneva

To participate in the universal session, the SIDS Beneficiary Delegates and travelled 403,121 km, a distance of more than 10 circuits around the globe, and spent more than 500 hours (approximately 20 days) traveling. Efren Jogia, a 2014 delegate of the Fellowship Programme from Tuvalu said: ‘My journey from Tuvalu to Switzerland was a three-day marathon! After having arrived from Funafuti, via Suva, Nadi, Sydney, Saudi Arabia, and then Brussels, needless to say that I was a bit overwhelmed when I arrived in Geneva.’

Molly Helkena, from the Marshall Islands, was a Beneficiary Delegate at HRC34. She highlighted the challenges faced by a Delegate coming from a SIDS without a Permanent Mission in Geneva: ‘When I first got into the plane, I was asking myself what I was getting myself into it. I was scared. It was my first time to come to this part of the world. You get rid of your fears and the despair about what is coming ahead. And when you succeed, the end result is that you made it! I am here at the Council; I am getting my voice heard. It is a privilege to be here. My voice was heard, even from a small State that I am coming from, and I was able to deliver my messages and issues.’

Le Conseil des droits de l’homme ne s’apprend pas, il se vit !  (We do not learn about the Council, we live it!)

Technology is available to ensure that Delegates have a better understanding of the work of the HRC. These include the e-learning tool, which is a free, accessible, and gender-sensitive online training about the HRC and its mechanisms, developed by the LDCs/SIDS Trust Fund.

However, we do not learn about the Council, we live it! It is critical that LDCs/SIDS Delegates have the opportunity to attend a regular session of the Council. Discussions take place not only in Room XX, but also in the many conference rooms of the Palais des Nations, where informal discussions focus on resolutions and decisions. There are also many side-events to attend.

The physical participation of the LDCs/SIDS at the Council is essential for them to be full participants and must be strengthened. It costs approximately 12,000 CHF for a Delegate from these regions to attend a session in Geneva. This is a long-term investment the international community should take to make the promotion and protection of human rights truly universal.

The diversity, richness, and strong commitment of the Delegates are reflected in their testimonies in the various publications of the Trust Fund. The Beneficiary delegates take full advantage of the opportunities provided by the Trust Fund to become fully acquainted with, and participate in, the work of the Human Rights Council. This has had a tangible impact on the work of the delegates when they return to their countries.

The delegates and fellows attending sessions of the HRC make the long journey to Geneva determined to contribute to human rights, to find solutions to the myriad of global human rights challenges, and ensure that human rights continue to be a key priority on the international agenda. As a result of the Trust Fund, a country’s size, location, and level of development does not pose a barrier for their participation and contribution to the HRC.

The LDCs/SIDS come to share their experiences and vision. Their views inform the HRC and other Geneva-based bodies charged with the promotion and protection of human rights. Moreover, through face-to-face interactions, OHCHR, the HRC’s Member and Observer States, and NGOs can hear and learn from the LDCs/SIDS delegates.

At the same time, LDCs/SIDS participating in the work of the HRC have the opportunity to hear from other delegates in the room, including representatives of the Geneva-based human rights bodies and organisations. These discussions can help inform national and regional human rights policy-making and to strengthen and build capacity for the promotion and protection of human rights on the ground. This underscores the invaluable role of the Trust Fund.

The LDCs/SIDS Trust Fund – An expanded donor base

The success of the Trust Fund is dependent on voluntary contributions from donor countries. These enable the HRC to continue the objective of universal participation in its work. Donors have responded quickly and generously. In 2015, there were only three States that contributed to the Trust Fund. In the last two years, the number of donors to the Trust Fund increased to 21 States, reflecting the importance of ensuring that the necessary financial support is available to enable LDCs/SIDS to participate in the work of the HRC.[2]

At the outset, a core group of States, including Switzerland, a small number of LDCs and SIDS, and other like-minded countries led the Trust Fund initiative. Today, the Trust Fund is widely recognised as an HRC success story. Just three years after the Trust Fund became operational on 1 January 2014, the support it has provided has led to a marked increase in the participation in, and contribution of, LDCs/SIDS to the work of the HRC. This assessment is based on statistical evidence outlined below.

Resolution 34/40 sets out a road map that will guide the Trust Fund in implementing its mandate. On its tenth anniversary, in 2020, the work of the Trust Fund will be reviewed and its impact and accomplishments assessed. Much work remains to be done in the run up to that time and many objectives to achieve.

The Trust Fund aims to ensure that all LDCs/SIDS have received support by 2018. There are also plans to conduct workshops in Africa, Asia, and the Pacific, the Caribbean and Latin America. It is also the goal to include former beneficiary Delegates in these workshops to help assess accomplishments and plan the way forward. In addition, briefings will be given to LDCs/SIDS Permanent Missions to the UN in New York to inform them of the work of the HRC, to further build synergies between New York and Geneva, and to continue capacity-building and training.

Meanwhile, the Fund will continue to support the objective of universality in Council participation. The Council’s thirty-sixth session will convene from 11 to 29 September 2017 and the Trust Fund will support the participation of 9 Delegates and Fellows (seven women and two men).[3]

Capacity-building in the field of human rights and the universality of the HRC will remain priorities for the Trust Fund. As stated by the High Commissioner for Human Rights, Zeid Ra’ad Al Hussein, ‘the Trust Fund supports the efforts of OHCHR to build the capacity of government officials working in the field of human rights and enable their direct and informed participation in the Human Rights Council and its mechanisms’.[4] The work of the Trust Fund and the concept of universality that underpins its support for LDCs/SIDS falls squarely within the objectives of the UN 2030 agenda, and will help accelerate implementation of all 17 Sustainable Development Goals.

Ideally, the Trust Fund’s support should also encourage more LDCs/SIDS to stand for election, and be elected as Members, of the HRC. Currently, only five LDCs are among the 47 members of the Council and none are SIDS. The current LDCs Members of the HRC are Bangladesh, Burundi, Ethiopia, Togo, and Rwanda. The only SIDS that have ever been a member of the HRC since it was established one decade ago is the Maldives and Mauritius.

Food for thought…as the elections for the 2018-2019 Membership of the Council will soon take place.

Ms Fatou Camara Houel is the Secretary of the United Nations Human Rights Council Advisory Committee and the Coordinator of the Voluntary Technical Assistance Trust Fund to Support the Participation of Least Developed Countries (LDCs) and Small Island Developing States (SIDS) in the work of the Human Rights Council (HRC). The Trust Fund is administered by the Human Council Branch of the United Nations Office of the High Commissioner for Human Rights (OHCHR).

The views expressed in this article are personal and do not necessarily reflect the views of the United Nations.

[1] The historic first universal session of the HRC on the occasion of its Anniversary: the contributions of the LDCs/SIDS Trust Fund, page 29, available here.

[2] List of donor countries and their statements on the reasons they supported the Trust Fund available here.

[3] Biographies of the Delegates and the Fellows, available here.