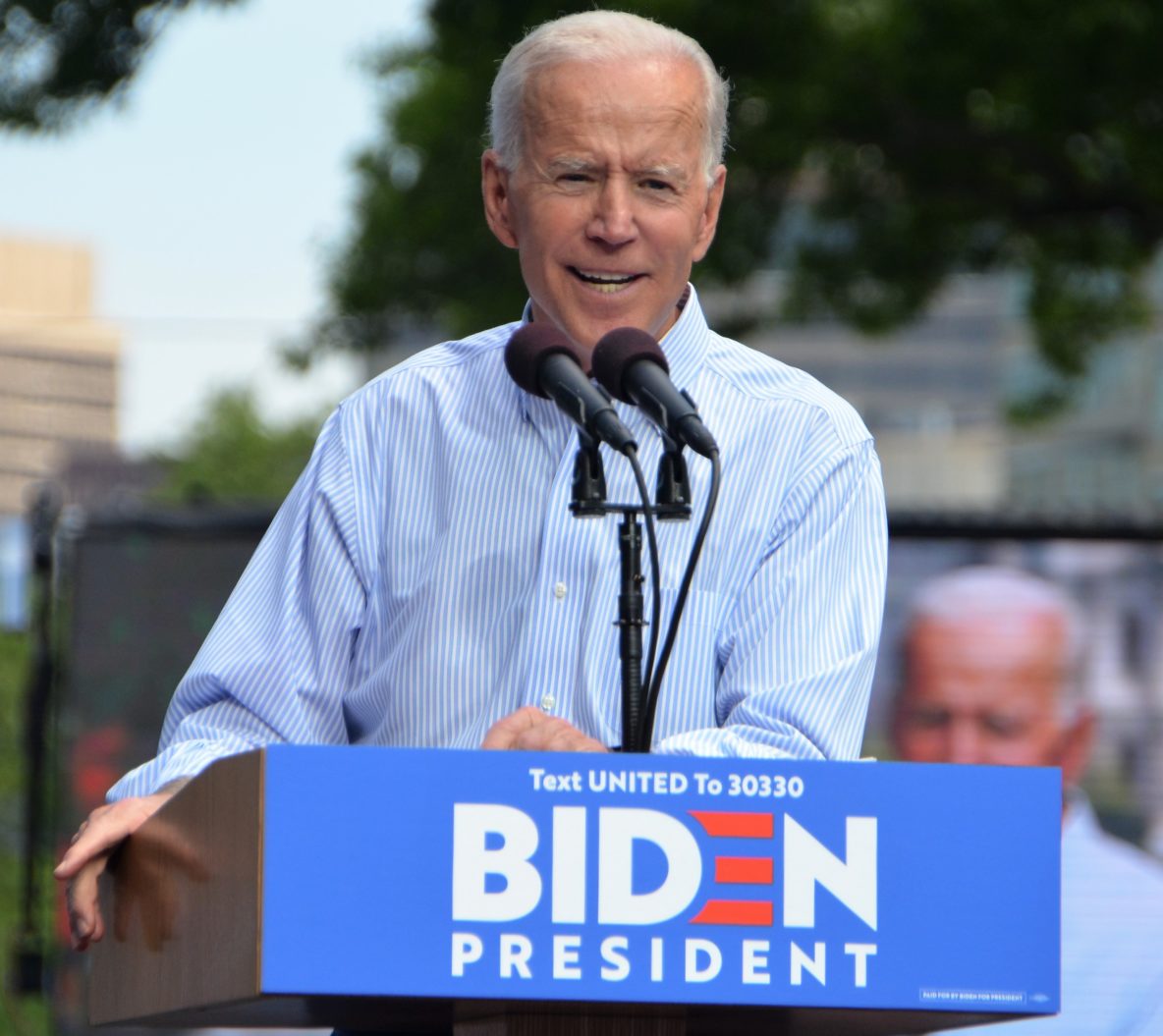 Those listening to President-elect Joe Biden’s victory speech over the weekend would have heard him make a fleeting reference to his vision for resetting US foreign policy and renewing America’s global leadership. “Tonight,” he said, “the whole world is watching America. I believe at our best, America is a beacon for the globe. And we lead not by the example of our power, but by the power of our example.”

But what did he mean by this?

The last line is, in fact, a direct reference to a speech he gave in the summer of 2019 in New York, and from an article he wrote around the same time in Foreign Affairs magazine. The two interventions were designed to set out a blueprint – should he be elected President – for ‘Rescuing US foreign policy after Trump’ by renewing America’s global leadership to tackle pressing concerns such as resurgent nationalism and populism, backsliding on human rights, the threat of climate change, and the fight against corruption.

The meaning of the phrase “we lead not by the example of our power, but by the power of our example” is clearly elaborated in both the speech and the article. It refers to Biden’s determination that the US will not be able to convince other countries to act to strengthen democracy, protect human rights and fight climate change, if the US itself is failing in these areas. Thus, the US, under President-elect Biden, will first work to ‘get its own house in order,’ by rebuilding American democracy, better protecting the rights of all Americans without discrimination, and making ‘massive, urgent investments that put the United States on track to have a clean energy economy with net-zero emissions by 2050;’ and will use that “example” to lead the world to finally confront these critical challenges at international level.

“The global challenges facing the United States,” remarked Biden in his Foreign Affairs article, ‘from climate change and mass migration to technological disruption and infectious diseases, have grown more complex and more urgent, while the rapid advance of authoritarianism, nationalism, and illiberalism has undermined our ability to collectively meet them. Democracies – paralysed by hyper-partisanship, hobbled by corruption, weighed down by extreme inequality – are having a harder time delivering for their people. Trust in democratic institutions is down, fear of ‘the other’ is up, and the international system that the United States so carefully constructed is coming apart at the seams. Trump and demagogues around the world are leaning into these forces for their own personal and political gain.’

As noted above, to begin to reverse these trends, Biden will, ‘first and foremost [act to] repair and reinvigorate our own democracy.’ ‘The United States’ ability to be a force for progress in the world and to mobilise collective action,’ he argued, ‘starts at home.’ ‘That is why I will remake our educational system so that a child’s opportunity in life isn’t determined by his or her zip code or race, reform the criminal justice system to eliminate inequitable disparities and end the epidemic of mass incarceration, restore the Voting Rights Act to ensure that everyone can be heard, and return transparency and accountability to our government.’

‘And I will ensure that the White House,’ he continued, ‘is once again the great defender – not the chief assailant – of the core pillars and institutions of our democratic values, from respecting freedom of the press, to protecting and securing the sacred right to vote, to upholding judicial independence. These changes are just a start, a day-one down payment on our commitment to living up to democratic values at home.’

Building from these crucial steps, a Biden administration will then seek to reassert democratic and human rights values (what he calls America’s ‘core values’) in its dealings with the wider world. ‘I will immediately reverse the Trump administration’s cruel and senseless policies that separate parents from their children at our border; end Trump’s detrimental asylum policies; terminate the travel ban; […] set our annual refugee admissions at 125,000, and seek to raise it over time, commensurate with our responsibility and our values; […] reaffirm the ban on torture and restore greater transparency in US military operations; and restore a government-wide focus on lifting up women and girls around the world.”

“…the power of our example”

Having taken these essential steps to reinforce the democratic foundation of the United States and inspire action in others, President-elect Biden intends to ‘invite my fellow democratic leaders around the world to put strengthening democracy back on the global agenda.’

‘Today,’ he noted, ‘democracy is under more pressure than at any time since the 1930s. Freedom House has reported that of the 41 countries consistently ranked ‘free’ from 1985 to 2005, 22 have registered net declines in freedom over the last five years. From Hong Kong to Sudan, Chile to Lebanon, citizens are once more reminding us of the common yearning for honest governance and the universal abhorrence of corruption. An insidious pandemic, corruption is fuelling oppression, corroding human dignity, and equipping authoritarian leaders with a powerful tool to divide and weaken democracies across the world. Yet when the world’s democracies look to the United States to stand for the values that unite the country – to truly lead the free world – Trump seems to be on the other team, taking the word of autocrats while showing disdain for democrats. By presiding over the most corrupt administration in modern American history, he has given license to kleptocrats everywhere.’

As a starting point in a renewed commitment to lead the free world in the ‘fightback’ of democracy and human rights, Biden has committed to organise, during his first year in office, a global Summit for Democracy ‘to renew the spirit and shared purpose of the nations of the free world.’ The Summit will aim to ‘bring together the world’s democracies to strengthen our democratic institutions, honestly confront nations that are backsliding, and [secure] significant new country commitments in three areas: fighting corruption, defending against authoritarianism, and advancing human rights in their own nations and abroad.’ Again seeking to ‘lead by example,’ Biden promises that ‘as a summit commitment of the United States, I will issue a presidential policy directive that establishes combating corruption as a core national security interest and democratic responsibility, and I will lead efforts internationally to bring transparency to the global financial system, go after illicit tax havens, seize stolen assets, and make it more difficult for leaders who steal from their people to hide behind anonymous front companies.’

‘The Summit,’ he promises, ‘will also include civil society organisations from around the world that stand on the frontlines in defence of democracy,’ ‘the private sector, including technology companies and social media giants, which must recognize their responsibilities and overwhelming interest in preserving democratic societies and protecting free speech.’ ‘At the same time, free speech cannot serve as a license for technology and social media companies to facilitate the spread of malicious lies, […] hate and misinformation, spurring people to violence, or remaining susceptible to other misuse.’

The role of the UN and its Human Rights Council

The Universal Rights Group has repeatedly called, over recent years, for the UN, and especially the Human Rights Council, to play a more determined and activist role in shoring-up worldwide democracy and democratic institutions, and in promoting free and fair democratic elections. With the election of Joe Biden, that call becomes even more urgent. Democratic nations must seize the moment to fully leverage the multilateral system, in concert with initiatives such as the ‘Summit for Democracy,’ to drive progress with civil and political rights (which taken together represent a ‘blueprint’ for democratic institutions and the rule of law) and thus play their part in the ‘fightback’ of global democracy.

It is probable that the US, under Joe Biden, will return to the Human Rights Council in 2021 to help drive such an agenda. While he is expected to prioritise a return to the Paris Climate Change Agreement and the WHO during the first days of his Presidency, he has previously committed (for example during a speech to mark Human Rights Day in December last year) to bring the US back into a reformed Human Rights Council.