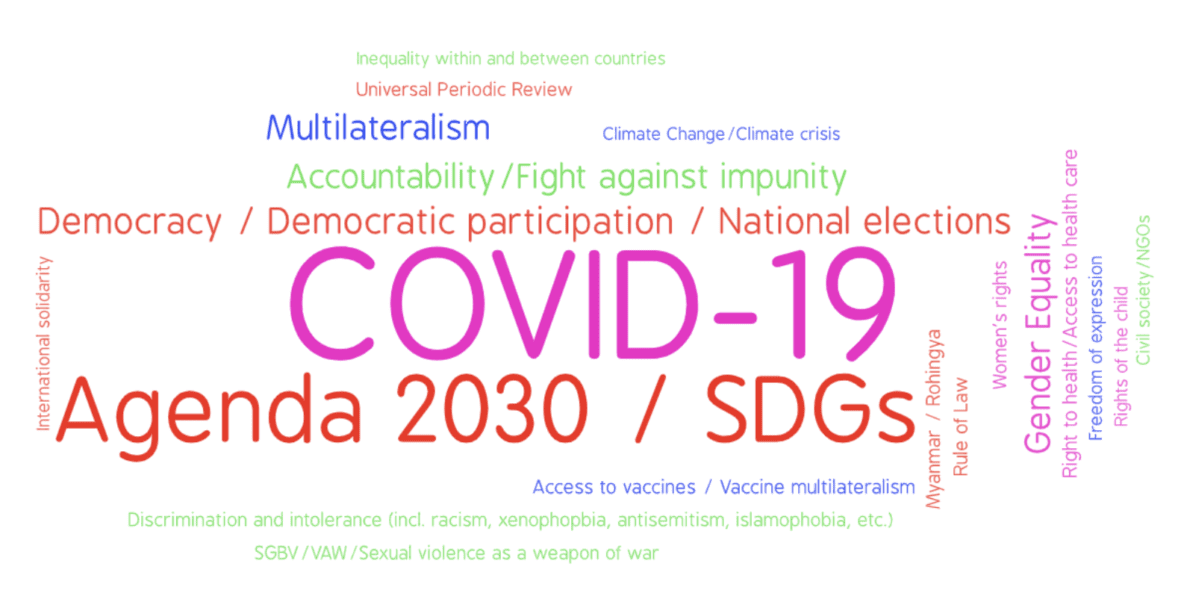 The High-Level Segment of the 46th session of the Human Rights Council, held from February 22 to 24 2021, saw the active participation of more than 130 world leaders, including presidents, prime ministers, ministers, and heads of international organisations. In the statements they delivered to the Council, they addressed both domestic human rights concerns, developments and achievements, as well as their countries international priorities in the human rights sphere for 2021 and beyond. As such, the participation of High-Level representatives presented an opportunity to assess the level of attention and prioritisation given by various States to specific human rights topics.

The Universal Rights Group (URG) has analysed the content of over 100 statements made by State representatives, to identify the key human rights themes, debates, situations of concern, and priorities for 2021. The results of this analysis are presented below in a number of ‘word clouds’, where the size of the word reflects the total number of mentions of the relevant topic/situation. URG has identified a total of 123 topics that were highlighted by at least four different State Representatives during the High-Level Segment. These topics were grouped in six different categories and URG has generated individual word clouds for each of them. The categories are as follows: institutional topics related to the UN human rights bodies and mechanisms; civil and political rights; economic, social and cultural rights; groups in focus; country or regional situations; and cross-cutting themes. In addition, URG identified the ‘top 20’ most frequently mentioned themes across all categories, which is represented in the first word cloud. 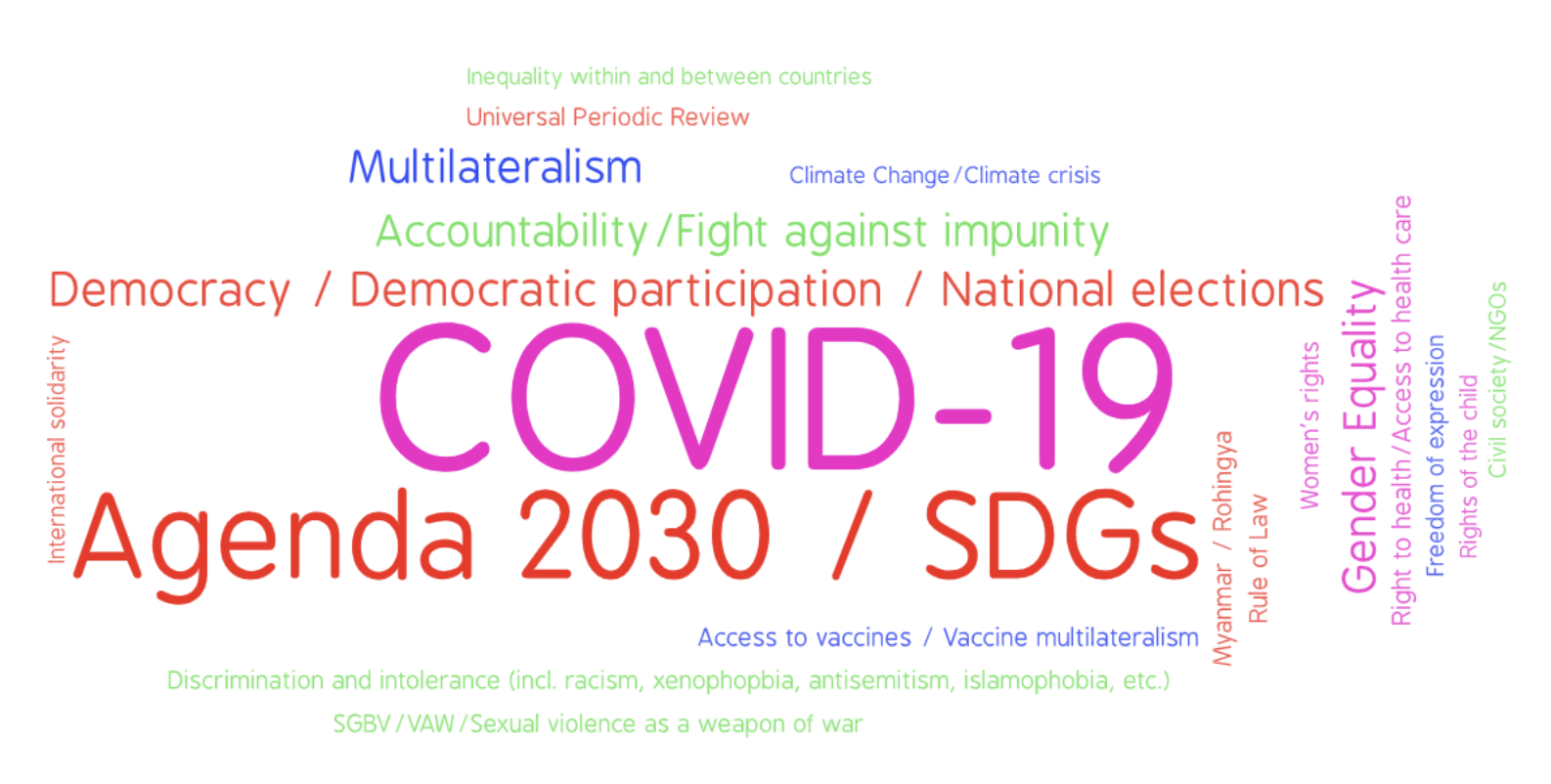 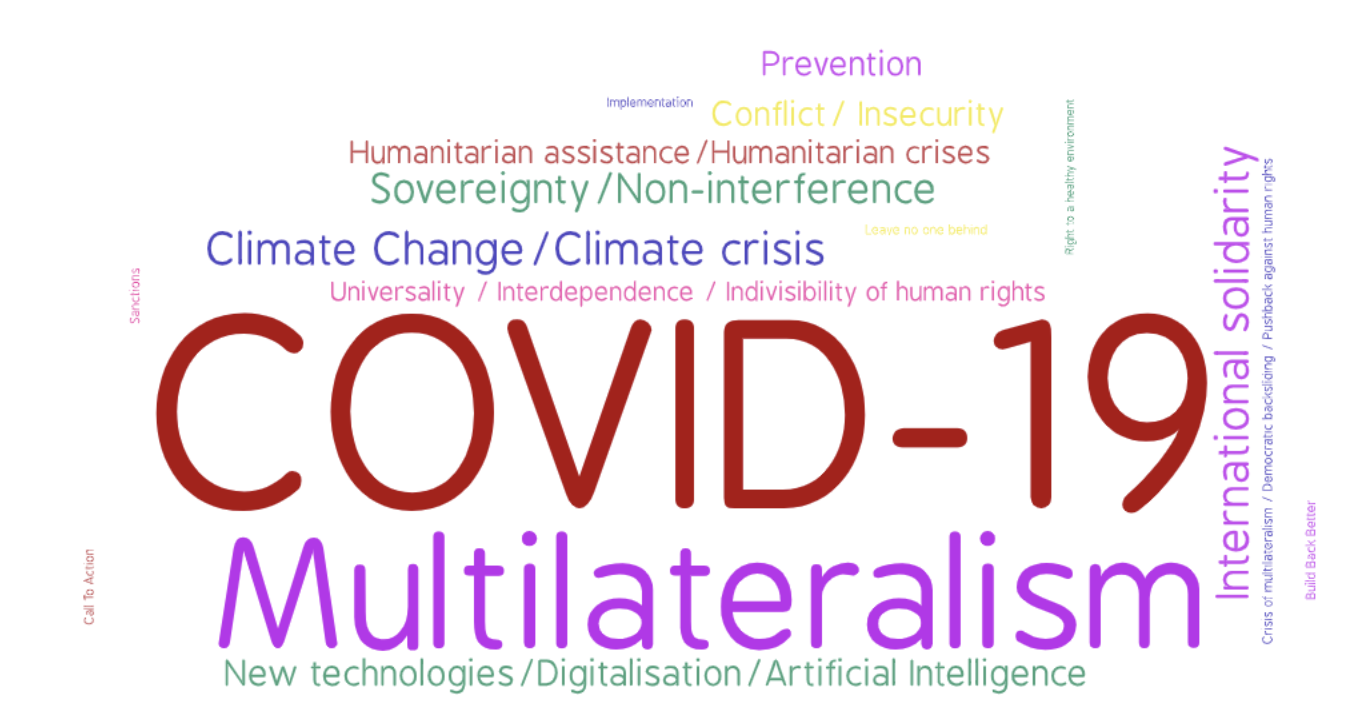 Looking at cross-cutting/horizontal human rights concerns, there was an overwhelming focus on the COVID-19 pandemic and its effects on human rights. States consistently underlined the need for strengthened multilateralism and international solidarity if the international community wanted to overcome the pandemic and its devastating effects on societies as a whole and the lives of individual rights holders. Many States also drew attention to the climate crisis and its effects on human rights, recognising that the pandemic was a crisis on top of the existing climate crisis. Other cross-cutting themes in focus were prevention, as well as new technologies and digitalisation.

With regard to civil and political rights, highest attention was given to the theme of democracy, democratic participation, and national elections, with leaders recognising the threat the pandemic posed to democratic institutions and the opportunities it had provided for further backsliding, including by the (over)use of emergency powers. States also paid great attention to ensuring accountability and fighting impunity – both nationally and internationally. The need to address discrimination and intolerance (including racism, xenophobia, and islamophobia) was consistently underlined, reflective of the 20th anniversary of the Durban Declaration and Programme of Action. States also regularly underlined the need to safeguard the freedom of expression and the freedom of association and assembly, including in context of peaceful protests, and in the online sphere. 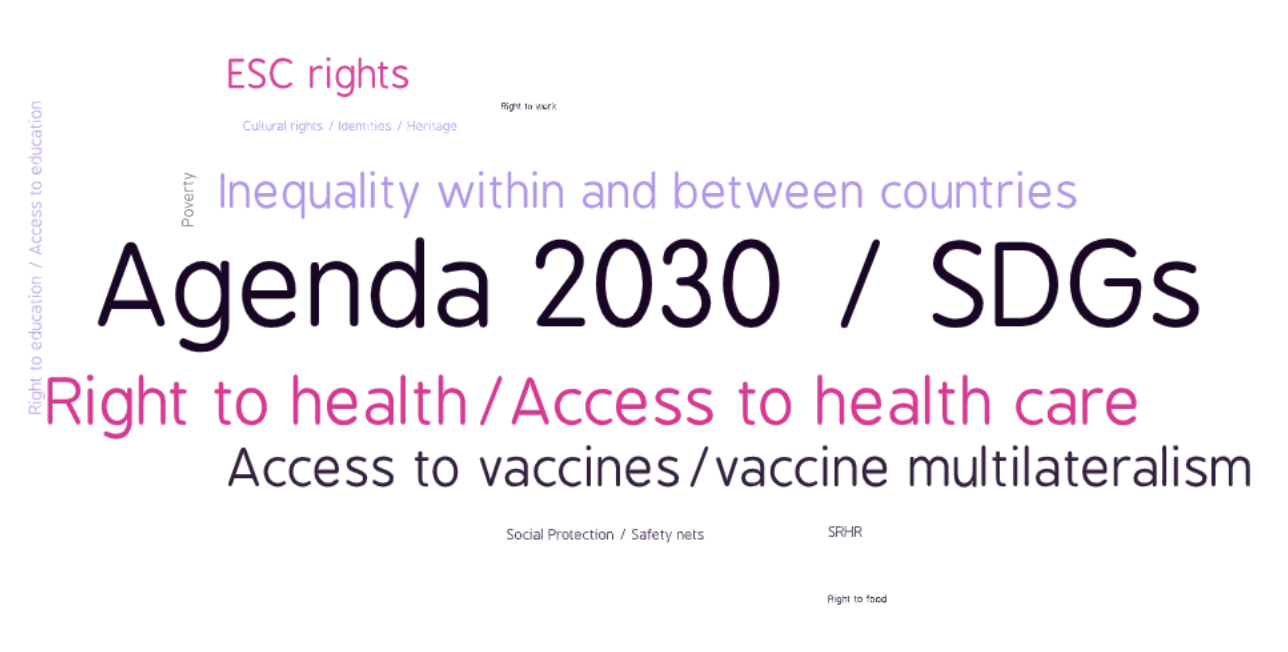 A key trend in the domain of economic, social and cultural rights was the large number of mentions of the right to health, access to healthcare, health facilities, and universal health coverage, which are priorities reflective of the COVID-19 pandemic. Similarly, a large number of States focused on equitable access to vaccines and vaccine multilateralism, underlining the need for international solidarity in vaccination efforts. Among the other themes widely mentioned were: inequality within and between countries, the right to education, poverty, social protection, and sexual and reproductive health and rights. 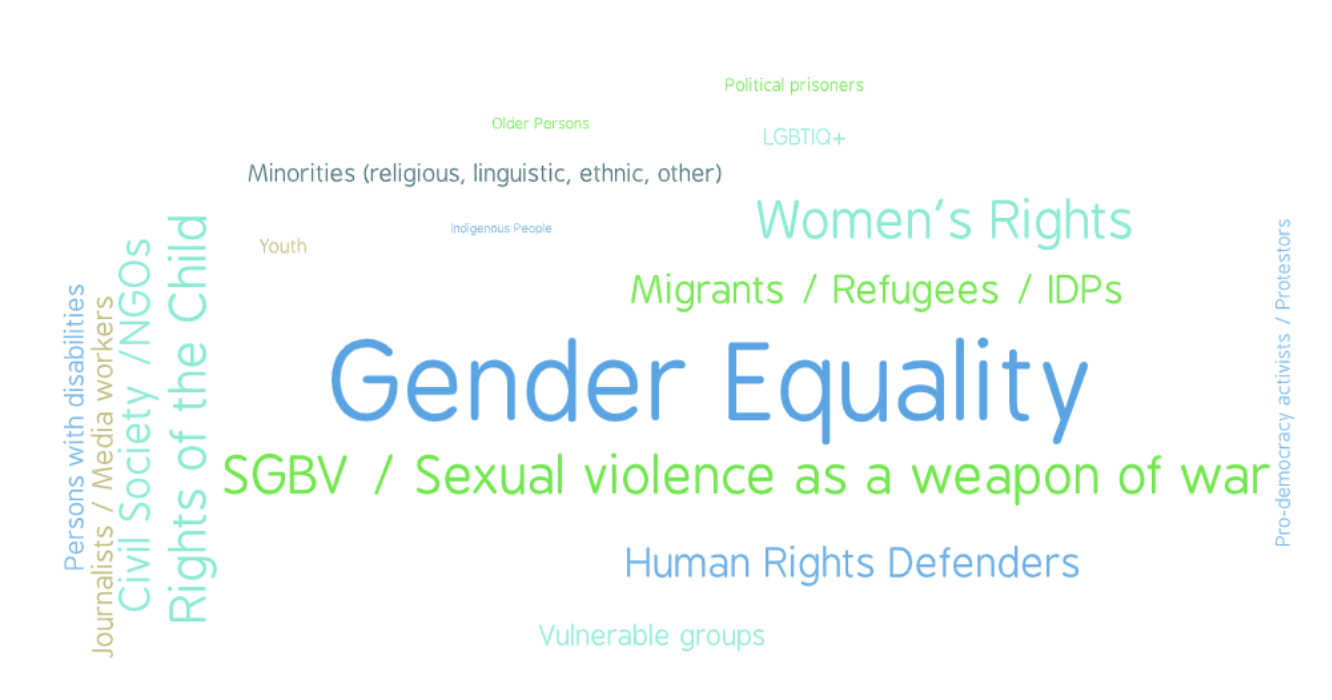 Turning to ‘groups in focus’ or ‘groups in vulnerable situations,’ the HRC46 High Level Segment saw an emphasis on gender equality, followed by sexual and gender-based violence and women’s rights. This focus reflects the disproportionate effect the COVID-19 pandemic has had on women and the increase of domestic violence, particularly against women. States also paid considerable attention to the rights of the child, including domestic violence against children. Moreover, States consistently highlighted the role of civil society and human rights defenders in the promotion and protection of human rights, regularly expressing concern at increasing intimidation against these groups and the shrinking of civi space. 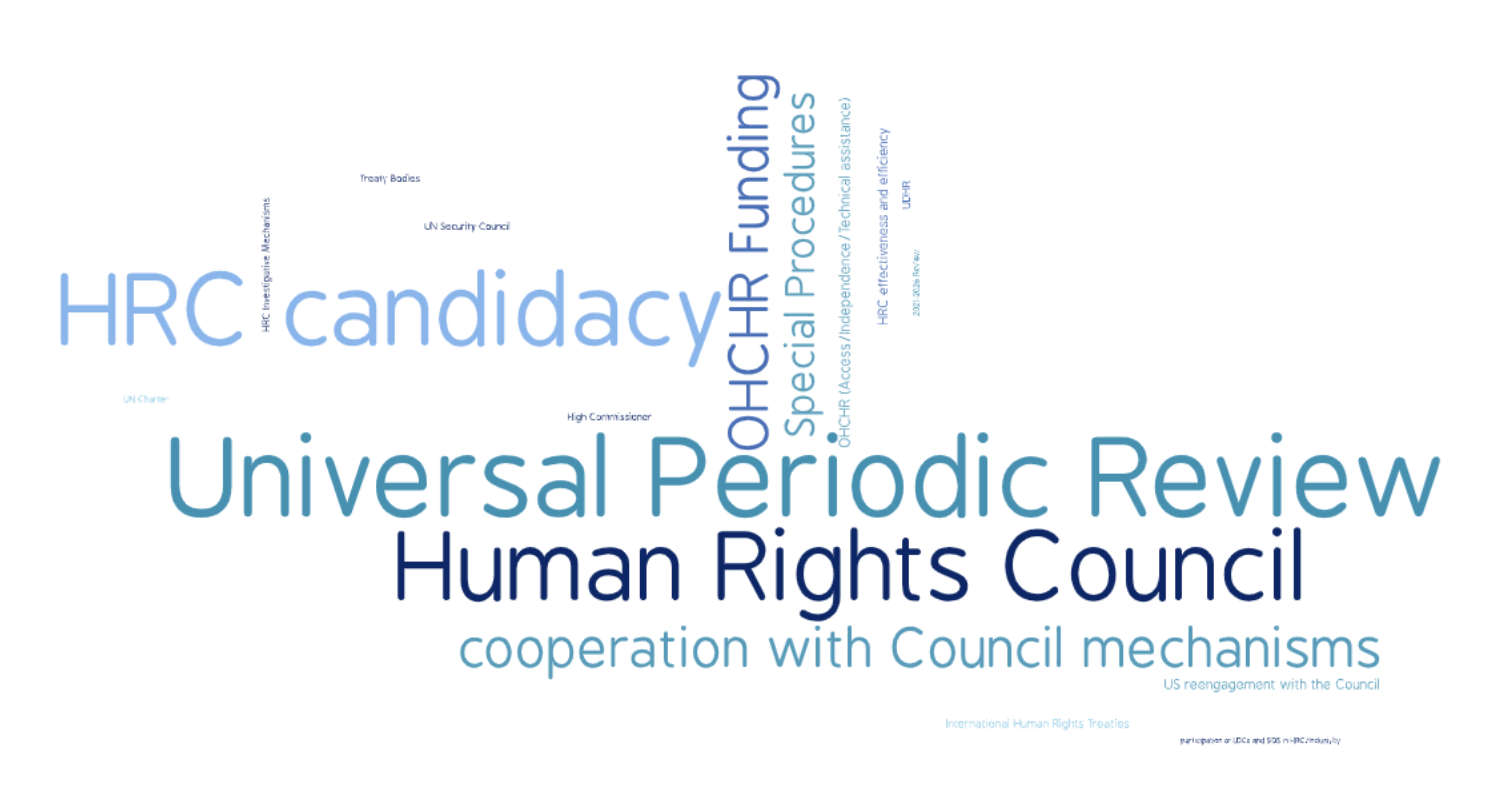 In the category of UN institutions and mechanisms, the Universal Periodic Review was highlighted by several representatives as a central mechanism for the protection and promotion of human rights. The possibility of having peer-to-peer exchanges of best practices as well as recommendations to ensure improvement of domestic situations was regarded as effectively advancing human rights around the world. During the HLS, many States announced their upcoming candidacy for a seat on the Human Rights Council, indicating a renewed interest in engaging on human rights within the multilateral system. In a similar regard, many States spoke of the need to ensure adequate funding for the OHCHR. States also regularly underscored the importance of cooperating with the Council mechanisms, or highlighted their own open cooperation with the UN human rights pillar. Finally, numerous States also welcomed the new US’s Administration’s choice to reengage with the Council. 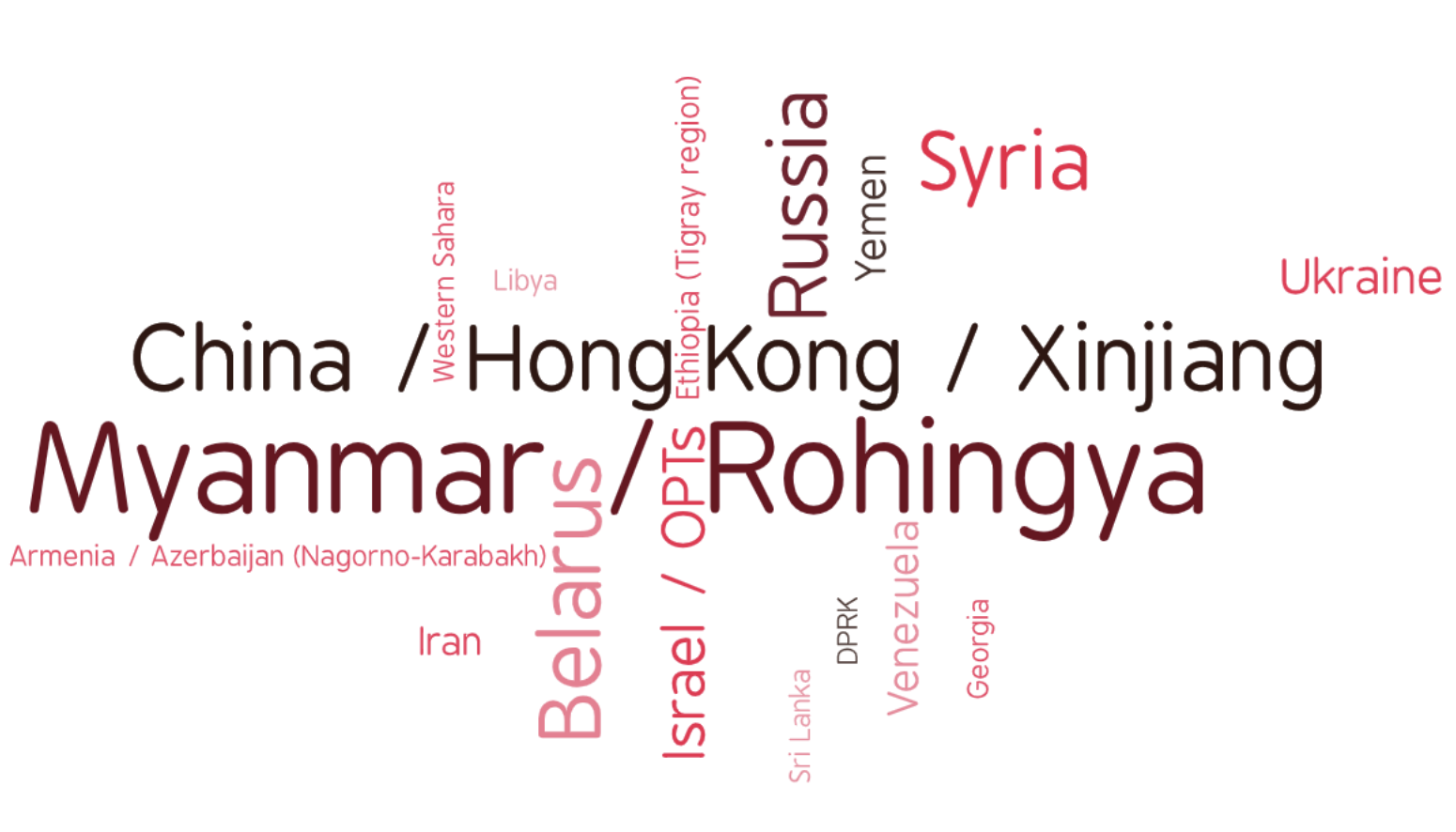 Regarding country-specific human rights violations, the 2021 HLS saw great concern over the situation in Myanmar in the wake of the military coup. The situation of human rights in China (in particular Hong Kong and Xinjiang) and Belarus rose to the top of States agendas – country situations that were seldom mentioned in the 2020 and 2019 High Level Segments. Many States also expressed concern regarding the human rights situation in Russia, particularly as a result of the detention Alexei Navalny and the subsequent protests. Meanwhile, the situations in Syria, Israel/Occupied Palestine Territories, Ukraine, Venezuela, and Yemen remained high on the international community’s agenda.