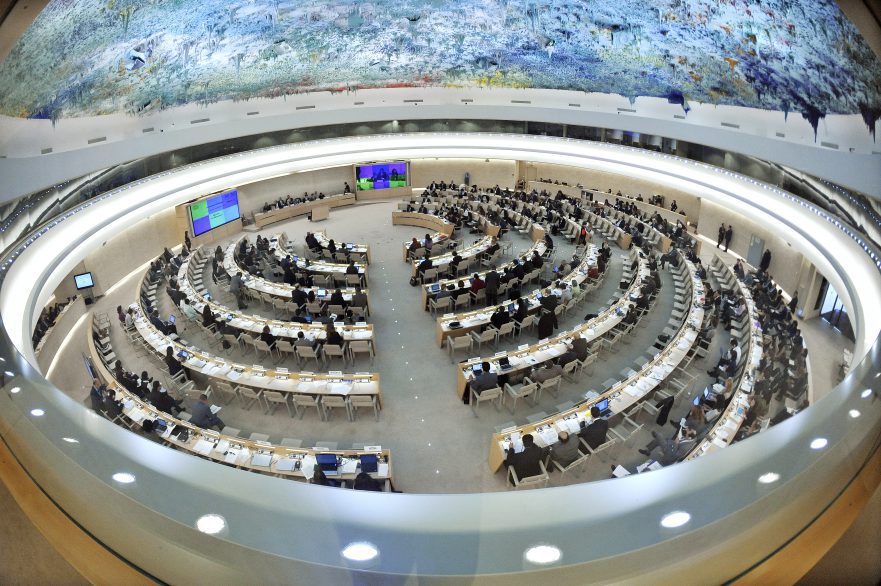 Towards the end of last year, Bahrain’s ambassador in Geneva suddenly threw his hat into the ring for the presidency of the Human Rights Council – potentially blocking the previously unopposed candidacy of Fiji’s ambassador, Nazhat Shameem Khan. Then, earlier this month, Belarus and Cuba delivered two joint statements at the Council, attacking EU member States and the UK, and calling on Western States to avoid criticizing China and to respect the country’s sovereignty. Two ostensibly unrelated events. Yet, in reality both are closely linked to the return of the US to the Council, following the election of President Biden, and both represent early ‘power plays’ by, in particular, China and Russia – plays designed to forestall, or pre-emptively weaken the credibility of, expected American criticism of their human rights records.

Bahrain’s last-minute gambit (backed by China, Russia and Saudi Arabia) was, in the end, unsuccessful. Thanks to Fiji’s determination to hold its ground, as well as the strong backing of other Pacific Small Island States, at the beginning of 2021 the full Council elected ambassador Khan to the presidency. Notwithstanding, the attempt was telling. It is true that many members of the Like-Minded Group (LMG), including China, Russia and Saudi Arabia, had long been concerned by the progressive and principled stances taken by Fiji on key issues and situations before the Council. However, in truth, these countries’ primary concern was not Fiji, but November’s election result in America and what it meant in terms of US re-engagement. In particular, they were keen to have a ‘friendly’ country in the president’s chair, both to control the agenda, and to keep a grip on the 2021-2026 Council review (reform) process – a reform process critical to long-term US membership of the UN’s primary human rights body.

Why did leading members of the LMG, already at that stage, have half an eye on the prospects of a US return? The Council had, after all, performed relatively strongly during the US’ three-year absence, addressing serious human rights violations (under item 4 of its agenda) in Myanmar, Philippines, Venezuela and elsewhere. The answer, put simply, is that of all Western States (i.e., the countries that tend to call out human rights violations), only the US has the geopolitical strength and political will to seriously challenge powerful countries like China, Russia and Saudi Arabia at the Council, including, potentially, with the threat of resolutions.

Which brings us to the joint statements delivered by Cuba and Belarus (though evidently with the support of China, Russia and other LMG members) during the item 4 general debate of the Council’s 46th session. The aim of these statements, supported, as they were, by other joint statements (e.g., one by China attacking Australia, and another led by Belarus, under item 3, defending Chinese actions in Hong Kong) and numerous national statements, was two-fold.

First, to secure the backing of as many UN members as possible behind the argument that it is not legitimate (i.e., it is contrary to the UN Charter) for the Council to criticise or otherwise pass comment on the internal affairs (i.e., the promotion and protection of human rights) of sovereign States. Second, to make the case that Council members and observers that do pass judgement on the internal affairs of others (especially developing countries) are hypocrites – because they themselves routinely violate human rights.

Cuba’s statement, delivered on behalf of 64 countries, began by expressing strong opposition to the ‘politicization of human rights and double standards.’ It then went on to ‘commend the people-centred philosophy that the Chinese government pursues and achievements that have been made in its human rights cause.’ On the issue of alleged human rights abuses in Xinjiang, in particular against the country’s Muslim Uyghur minority, Cuba urged Western States ‘to abide by the purposes and principles of the United Nations Charter, stop interfering in China’s internal affairs by manipulating Xinjiang related issues, refrain from making unfounded allegations against China out of political motivations, and curbing the development of developing countries under the pretext of human rights.’

Belarus’ statement, ‘delivered on behalf of a group of countries, including Iran, Burundi, China, DPRK, Nicaragua, Russia, Syria, Sri Lanka and Venezuela,’ expressed concern about the ‘situation of human rights in EU member States and the United Kingdom.’ The statement’s sponsors expressed particular concerned about ‘credible reports of systemic human rights violations, particularly those involving hate speech and crimes, glorification of Nazism, racial and ethnic discrimination, violation of rights of migrants, refugees and non-accompanied children and indigenous peoples, child sexual abuse, shrinking space for civil society, restrictions on peaceful assembly and associations, freedom of expression, [and] excessive use of force against demonstrators.’ The sponsors also pointed to allegations of human rights violations during the ongoing COVID-19 pandemic.

While this show of strength from the LMG will have undoubtedly harmed the Council’s reputation (item 4 is supposed to be a forum for scrutinising the worst human rights violations – not for denying or defending those abuses), if the goal of the sponsors was to prevent or dissuade the US from using the Council as a platform to call out and criticise serious human rights violations, or to shame American diplomats into silence (on the grounds that human rights violations also occur in the US), they will have been disappointed when, on 18 March, under agenda item 8, the US delivered a counter statement on behalf of 50 States, which rejected and rebutted the arguments put forward in the Cuban and Belarussian interventions.

‘We have heard a great deal,’ the statement began, ‘during the current session, about the importance of non-interference in domestic affairs. In response to these points, we have a very simple position: States that commit human rights violations must be held to account.’

‘The UN Charter acknowledges the domestic jurisdiction of member States. But it also affirms that human rights are universal.’ Appeals to ‘State sovereignty,’ it read, ‘cannot be used to shield a country from scrutiny for its behaviour toward those within its borders. Indeed, this notion lies at the very foundations of the UN, the Universal Declaration of Human Rights, and this very Council.  The Human Rights Council has the responsibility to act when States are not meeting their obligations – a responsibility articulated in General Assembly resolution 60/251.’

As if to reinforce this point, the US joined two important item 4 joint statements at the 46th session, one, led by Finland, on the human rights situation in Egypt (with 31 cosponsors), and another, led by Poland, on the situation in Russia (with 44 cosponsors).

Responding directly to the Belarussian joint statement, the US then acknowledged that ‘no country – including our own – can claim to have a perfect record on human rights. But we can and must strive to do better […] Attempts by States to deflect criticism by blaming others do not diminish their responsibility to protect their own populations.’