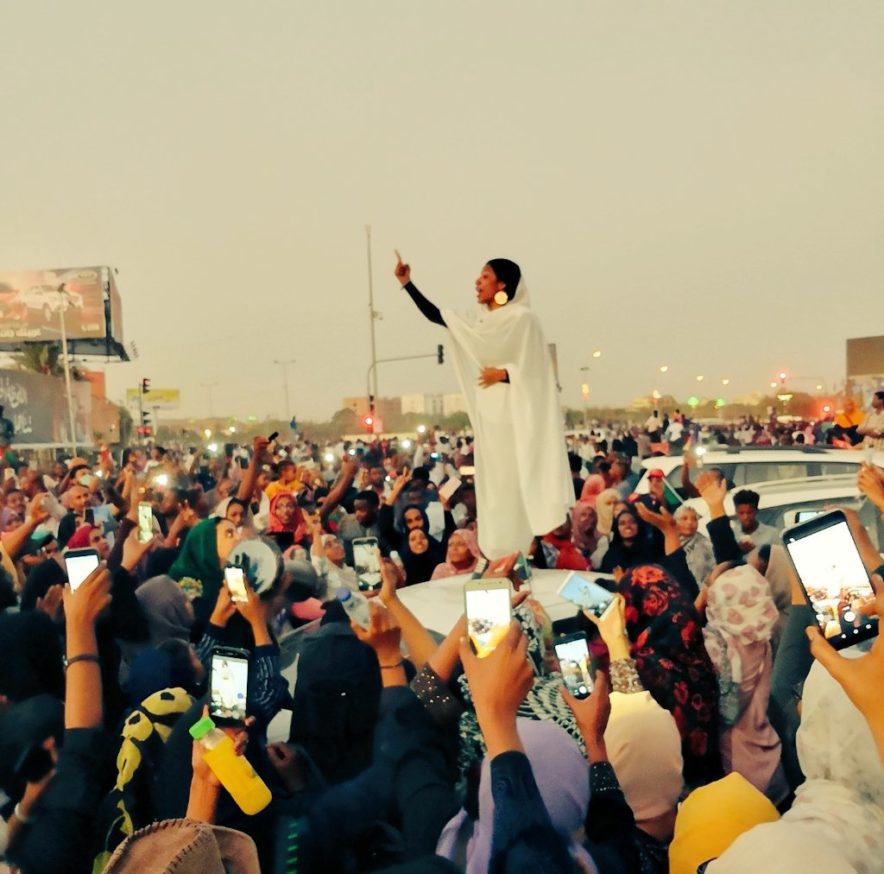 In September 2018, the Human Rights Council adopted resolution 39/22, on ‘Technical assistance and capacity-building to improve human rights in the Sudan.’ No one should be fooled by its title: this latest iteration of the Council’s Sudan-focused resolutions was, in the words of Human Rights Watch, ‘an abdication of the Council’s responsibility to human rights victims in Sudan while grave violations are ongoing.’[1] It marked a sad, yet logical, conclusion to years of resolutions that failed to reflect the gravity of the situation on the ground.

From civil society’s perspective, resolutions on the situation in Sudan have been among the most frustrating of all the Council’s country-specific texts. Yet, every year, brave Sudanese human rights defenders (HRDs) have kept on coming to Geneva, continuing to place their hope in an international community that was obviously failing them.

In December 2018, the Sudanese people began peaceful mass protests that ultimately led to the downfall of the brutal 30-year old Al-Bashir regime. Al-Bashir’s removal occurred just a few days after the Council failed, at its 40th session, to take collective action to address the situation in Sudan.

While the situation is still unfolding (at the time of writing, demonstrators continue to call for a peaceful transition led by a civilian government), the UN human rights system has a unique opportunity to belatedly set the record straight by unequivocally supporting systemic human rights reform in Sudan.

Council resolutions on Sudan: chronicle of a failure foretold

Sudan was long on the agenda of the Commission on Human Rights. Following the creation of the Council in 2006, it was considered under agenda item 4, which is dedicated to the most serious situations. In 2011, non-human rights considerations led to resolutions on the situation being moved to item 10 (technical assistance and capacity-building) – in order to secure consensus. An Independent Expert mandate succeeded the previous Special Rapporteur mandate.[2]

Over the years, as the Council initiative switched from item 4 to item 10, meaningful language on violations, consultation with civil society, and the fight against impunity, disappeared. Although some resolutions (namely in 2013, 2014, and 2015) contained some language calling for scrutiny (‘assessing,’ ‘verifying’ and ‘reporting’ on the situation), the words ‘condemn’ and ‘impunity’ disappeared altogether with Council resolution 36/26 (September 2017).

All of this happened as civil society was calling for the country’s situation to be moved back to item 4 and for robust monitoring and reporting.[3] In an oral statement in September 2018, DefendDefenders argued that the Sudanese Government did not need more technical assistance but rather more political will. We stressed: ‘Item 10 should not be abused. Govern­ments that demonstrate a pattern of bad faith should not be allowed to abuse the Council’s time and resources.’[4]

Worse still, Council resolution 39/22 envisions an end to the existing mandate – once OHCHR sets up a country office in Khartoum. It stipulates that the termination of the mandate will take effect ‘on the day that [an OHCHR] country office […], is declared operational’ by both parties. (In the last informal consultation on the text, the Sudanese Ambassador to the UN indicated that his Government did not even feel bound by this deal. Soon after the session, he bragged in front of domestic media that any OHCHR staff member engaging in activities that would not be explicitly mentioned by the Government/OHCHR MoU would be immediately expelled from the country.)

This was not an unusual utterance, but rather part of a pattern of conduct that made a mockery of good faith and prevented the building of mutual trust.

Sudan’s bad faith and obstructionism: an obstacle to the work of human rights bodies

Over the years, Sudan has repeatedly failed to cooperate with the Independent Expert, or with other bodies and mechanisms, in good faith. In his last report, the Independent Expert made clear that ‘[i]n spite of […] steps and assurances of cooperation, [he was] deeply concerned that a significant number of his recommendations have still not been implemented.’[5] This, in itself, defeats the Government’s claim, which it reiterated during the Council’s 39th session, that it has not received ‘any technical assistance’ to date.[6]

In addition to demonstrating bad faith with regard to the advisory services it received, the Government repeatedly denied expert access to certain areas and prevented them from meeting with independent actors (free from surveillance). It routinely attempted to monitor meetings between experts and civil society, attacked successive Independent Experts whenever they raised patterns of violations (with claims that they had ‘overstepped’ their mandate), denied the fact that monitoring and public reporting are the factual basis of technical advice, and prevented meaningful, inclusive and transparent discussions on UN resolutions related to its domestic situation.

Government agencies, such as the infamous National Intelligence and Security Service (NISS), also engaged in intimidation and reprisals against HRDs, including several who attempted to travel to Geneva to attend a UPR pre-session in 2016.[7] This direct attack against the integrity of a Council mechanism was supplemented by more low-key, routine intimidation of HRDs by Bashir-funded ‘GONGOs.’

The previous Government claimed to support the UPR; yet, its behaviour ahead of its last review, and its rejection of recommendations linked to its human rights obligations, showed that it did not take the process seriously.

Expert bodies, including Treaty Bodies and Special Procedures, also faced a lack of cooperation. Sudan’s poor record of compliance led the Human Rights Committee, in 2018, to reference previous concluding observations and to express its disappointment at Sudan’s lack of action on recommendations.[8]

In this challenging landscape, OHCHR has tried both to provide support to the Independent Expert and to implement Council resolutions. The Office has often faced official accusations of bias, as well as backlashes. After an exploratory mission aimed at beginning talks on the opening of a country office, conducted in December 2018, High Commissioner Bachelet sent a letter to the Government requesting that a fully-mandated office be allowed to start operations.

A new chapter for the UN human rights system’s relationship with Sudan?

While the situation is still unfolding, the Council and other UN human rights bodies and mechanisms should seize the opportunity to support systemic human rights reform in Sudan.

‘Systemic reform’ includes efforts to bring the legislative framework into line with international standards, and to reform various policies and practices of the Government and other public authorities. It also means the conduct of a thorough investigation into past and ongoing violations and abuses, holding perpetrators to account and bringing decades of impunity to an end.

On the UN side, the onus is, first and foremost, on the Council, which has failed the people of Sudan for too long. The Council can now come clean and set the record straight. At this time, it should increase, rather than give up, its level of scrutiny and engagement with the Sudanese authorities.

This would be in line with the Council’s mandate to promote respect for human rights, address violations of human rights, provide advisory services, and engage in constructive dialogue and cooperation, including through the use of preventative tools.[9] Although the Council failed to address Sudan during its last regular session, in March 2019, and to commit to prevention engagement before and after Bashir’s ouster, it can now engage with the new authorities, helping them to prevent the recurrence of violations and build resilience.

A ‘new deal’ should rest on a holistic approach, enabled by adequate budget allocations, which could help make Sudan a new ‘success story’ for the Council. For this to happen, the new Sudanese authorities must bring past behaviour to an end: no more delays in acting on priority recommendations, no more denial of access, no more surveillance of independent actors, no more bullying, no more reprisals against HRDs, and no more rejection of scrutiny.

Any future ‘sunset clause’ (removing Sudan from the Council’s agenda) should be conditioned upon an independent assessment of the country’s situation and the fulfilment of objective criteria, including benchmarks for progress.

OHCHR also has a decisive role to play. An MoU should urgently be signed between the Sudanese authorities and the High Commissioner’s Office, allowing OHCHR to open a fully-mandated country office that has access to all areas and persons of interest, and is able to conduct investigative, monitoring and public reporting work, in addition to providing advisory services to the government and civil society.

A country office and ongoing consideration by the Council are not mutually exclusive. They are rather mutually reinforcing, as Council action provides political back up to expert work, while OHCHR work places expertise at the centre of political interventions.

UPR, Treaty Body, and Special Procedures recommendations can now be examined through a new lens and operationalised through a level of political will that did not previously exist. Regional mechanisms, including the African Commission on Human and Peoples’ Rights (ACHPR), also have an important role to play.

As avenues for genuine, good faith engagement with Sudan may be opening, human rights bodies and mechanisms should leverage their mandate to push for domestic progress and support the change the Sudanese people have long demanded.

[6] Recommendations on legal and policy reform, some of which have been identified as priority matters by the IE and his predecessors, constitute technical advice, as these recommendations aim at bringing national legislation, policies and practices in line with international standards.

[9] There has been much talk about how to operationalise the Council’s “prevention mandate.” On 9-10 April 2019, an intersessional seminar on the “contribution of the Human Rights Council to the prevention of human rights violations” was held in Geneva pursuant to HRC resolution 38/18 (https://www.ohchr.org/EN/HRBodies/HRC/Pages/PreventionOfViolations.aspx).