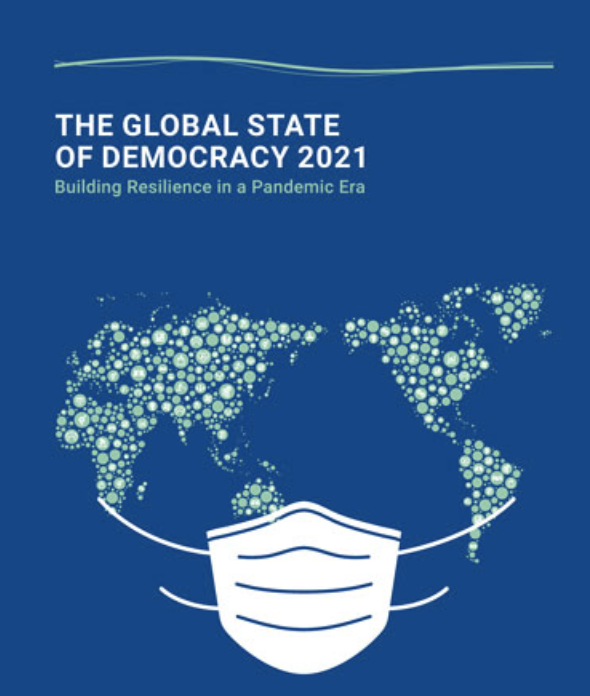 Are European democracies in peril? How has the COVID-19 pandemic affected them? And is the prevailing sense of crisis justified? ‘The Global State of Democracy,’ International IDEA’s biennial report last released in November 2021, is a health-check of democracies across the globe (including a chapter on Europe), designed to provide both a current snapshot of vital democratic attributes, an analysis of how they have fared over time, and a set of recommendations for action. Indeed, if there can be a silver lining to these difficult times, it is in the lessons and opportunities the crisis provides for reforming our systems of governance and the social contracts that underpin them.

Although many of Europe’s governments—in both old and new democracies—showed respect for human rights and democratic principles as they battled the pandemic, others systematically disregarded them. Some, particularly in Central and Eastern Europe, were quick to use the conditions presented by the pandemic to weaken democracy’s guardrails and expand the powers of the government. Three of the seven backsliding democracies worldwide are members of the European Union (Hungary, Poland and Slovenia). 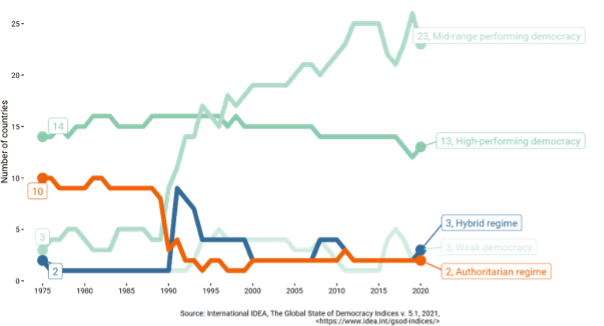 More worryingly, the quality of civil liberties and checks on government in many of Europe’s former socialist countries is now at a level comparable to when they joined the EU. The 2010s were a decade of missed opportunity for democratic consolidation across Europe, and the pandemic provided an excuse for further democratic erosion as incumbents tinkered with electoral rules (Poland), or friendly majorities in parliaments gave excessive powers to the prime minister (Hungary). Slovenia, which had been on a positive path for several years, is now classified as a backsliding democracy after the new, ruling elites used their office to weaken independent prosecutorial and justice institutions and to silence critical media outlets and civil society watchdogs. 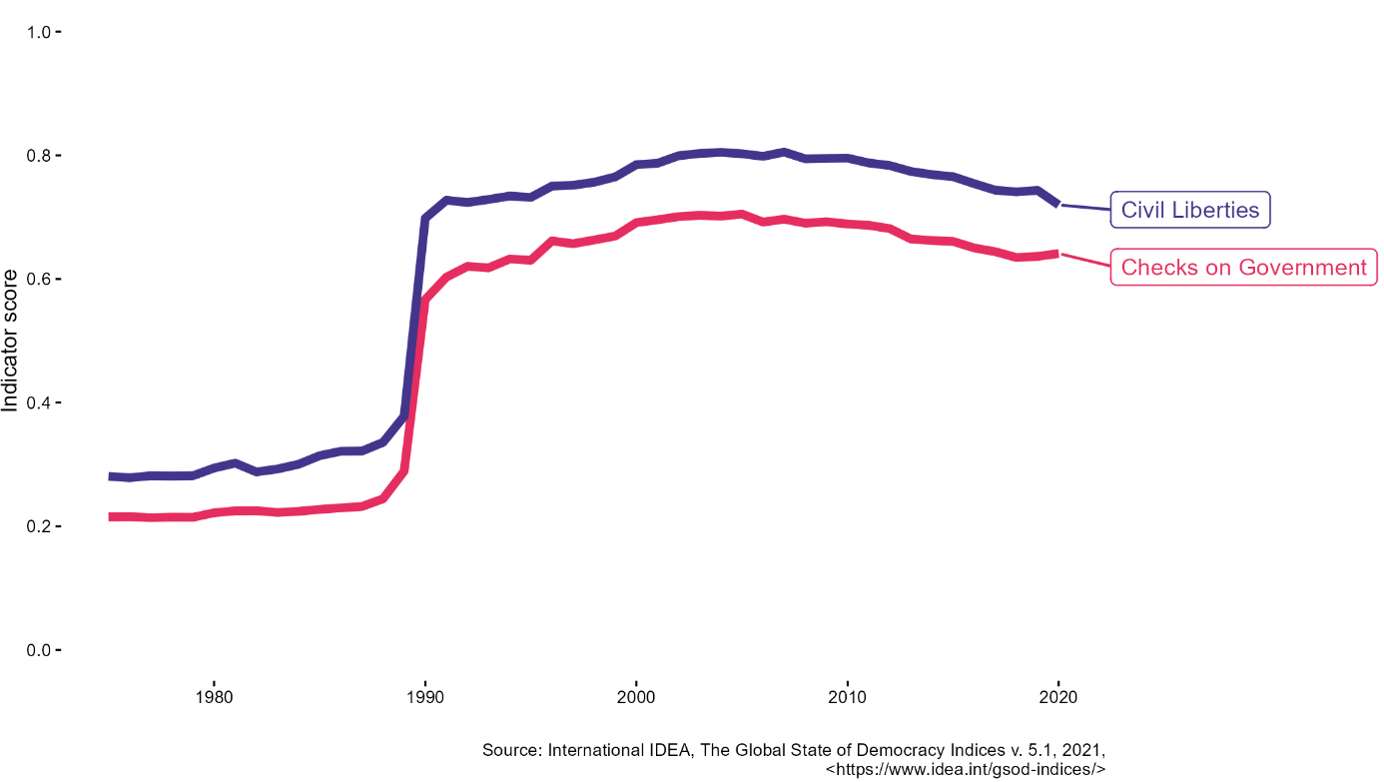 Furthermore, the role of parliaments came to the fore in sustaining the democratic systems of governance. As governments hurried to authorise emergency powers, the countries with stronger parliamentary traditions and conventions implemented effective checks on the executive. In contrast, in countries with weak practice of parliamentary oversight and co-opted or weak opposition factions, parliamentary scrutiny was weak or effectively absent. Strengthening parliaments’ oversight mandates and capacities will be critical in post-pandemic action to strengthen and protect democracies. Priorities should include peer-to-peer exchanges on roles and functions of special bodies for crisis monitoring and oversight, the use of technology in parliamentary proceedings, and outreach to constituents.

In the contexts of responding to the public health threats of the pandemic, governments in many established democracies struggled to enact limitations on rights and democratic processes in a manner proportionate to the needs of the pandemic. In the initial phase of the pandemic, many of them enacted limitations on access to public information or put up barriers for journalists to obtain and disseminate pandemic-related information. While disinformation about vaccines or myths that undermine the confidence in public health authorities is a very real concern, some countries passed disproportionate limitations on freedom of media that muzzled critical journalism. Governments in Azerbaijan, Belarus, Bulgaria, Hungary, Russia, Serbia, and Turkey made disinformation regarding COVID-19 an imprisonable offence or increased criminal sanctions. On the positive side, in order to satisfy an increased demand for public information related to the pandemic, many democracies across Europe saw high-level government officials hold regular press conferences, maximise the use of online information resources, and assign ‘essential worker’ status to media workers to secure their ability to work safely and without unnecessary hindrances. The pandemic has once again made it clear that democratic systems can only function properly where there is free and unhindered access to public information and that important decisions are based on sound public education and consultation processes.

The pandemic was a major test for free elections. Electoral management bodies (EMBs) had to balance health and safety concerns with the requirements of election schedules. But even under such duress, many found ways to hold well-administered and free and fair elections. The increased use of special voting arrangements in elections (especially postal voting and early voting) gave many people across the continent a safe way to exercise their democratic rights. Arguably, the use of special voting arrangements helped sustain pre-pandemic turnout figures in many elections. To expand voting opportunities, the special voting methods that worked during the pandemic should be made permanent but should be accompanied by sufficient safeguards against fraud.

During 2020-2021, the protection of women’s rights, gender equality, and protection for LGBTQIA+ individuals saw notable declines in some parts of Europe. In Hungary, transgender and intersex individuals were deprived of the right to change their legal gender, effectively denying them access to adequate healthcare and legal protection. In Poland, several local communities across the country declared themselves ‘LGBT-free’ areas.  In Georgia, the government was seen to have encouraged various extremist groups in their violent attacks against gatherings and offices of LGBTQIA+ rights activists, and journalists.

Many of the costs of the pandemic were disproportionately borne by women, who are more likely to be employed as care workers than men, and who across Europe continue to perform the majority of domestic work and childcare responsibilities. In many countries, domestic abuse hotlines and shelters reported a spike in women seeking help—seen in Armenia, Belgium, Bosnia and Herzegovina, Bulgaria, Cyprus, Czechia, Ireland, Poland, Serbia, Spain, and Russia. The pandemic has worsened the situation of racial and ethnic minorities. The Roma and Sinti communities, people of colour, and immigrants came under particular duress  as they faced targeted measures from law enforcement authorities often amounting to harassment and excessive use of force. This was particularly pronounced in Belgium, Bulgaria, France, Germany, Greece, Hungary, the Netherlands, and the UK.

Our findings point to an acute need for all governments to submit themselves to independent post-pandemic ‘state of emergency’ audits, including through facilitation by multilateral bodies such as the UN, CoE or the OSCE. Such audits should assess the measures taken thus far, and provide guidance for future emergency response frameworks that better protect human rights and democratic processes.

Last but not least, perhaps the most fundamental of the lessons emerging from this analysis is that there should be no complacency in the work of protecting and deepening our democracies. Civic activism and engagement, which has been spurred by the pandemic, underlined the importance of civic literacy for many in Europe. It also made it clear to many citizens that the gains of democracy cannot be taken for granted. Building on this momentum, governments, civic groups, and democracy support providers should expand opportunities for civic engagement in policy-related deliberations and implementation.