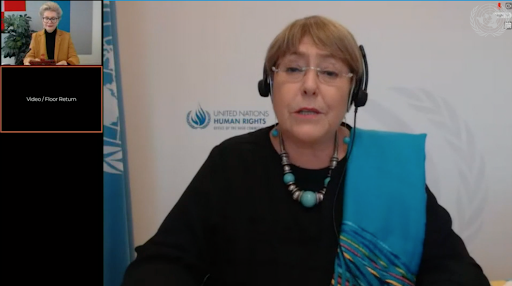 As part of the 75th Session of the UN General Assembly, both the High Commissioner for Human Rights and the President of the Human Rights Council gave statements to the Third Committee. Statements, and the interactive dialogues with member States that followed, were conducted virtually and not without the occasional technological hiccup. Nevertheless, a higher number of states participated than last year, with states from the Asia-Pacific Group in particular better represented. Major topics of conversation were the impact of the pandemic on human rights and the functioning of the UN’s human rights system, and the role of the human rights system in conflict prevention.

On 14 October, the High Commissioner for Human Rights, Michelle Bachelet, addressed the Third Committee and presented the OHCHR report (A/75/36). She then responded to questions, concerns, and complaints from member States. Watch the full speech and interactive dialogue here.

As in all sessions of the Third Committee this year, the impact of the Covid-19 pandemic on human rights and on the human rights system was a major topic. The High Commissioner spoke of the human suffering, weakened medical systems, economic damage, and threats to progress on sustainable development, and peace and security caused by the pandemic. She also said that some States have seen restrictions on civil and political rights imposed, including on the ability to participate in decision-making. She called for the easing of sanctions to allow unfettered access to medical equipment and supplies, for access to a vaccine to be ensured as a global public good. Bachelet highlighted the effectiveness of human-rights based policy responses to the pandemic and the importance of building back better, including environmentally.

The other two major focus points of the High Commissioner’s statement were conflicts and humanitarian crises, and the Sustainable Development Goals and the right to development. She drew an explicit link between these two areas: ‘I am convinced that this work [on economic, social and cultural rights and the SDGs] will also help to effectively prevent conflicts in the longer term, by addressing the root causes of many crises and tensions.’ She described human rights indicators and information as critical to conflict prevention, providing ‘ways to identify and then address the issues, which, if left unaddressed, can lead to crisis and conflict.’ Human rights analyses, she said, must be ‘integrated into strategies to prevent, mitigate or respond to emerging crises.’ Bachelet said that the pandemic had also exposed the harm caused by systemic inequalities in society, and the need to do more to advance economic, social and cultural rights, the right to development and the sustainable development goals. She echoed calls from other parts of the UN for urgent debt relief to grant States room to deliver on these rights (‘including to health, food and water, housing and decent work’).

Bachelet gave examples of the work the OHCHR had done in various countries on each of these areas: to integrate human rights into Covid-19 responses, promote economic, social and cultural rights, support countries in conflict and humanitarian settings, and provide technical assistance to National Mechanisms for Reporting and Follow-up. She pointed to new OHCHR efforts in the context of elections, as part of a broader push on prevention in the UN. As she did last year, the High Commissioner ended with a reminder that the UN’s ‘cash-flow crisis has severely restricted the availability of resources’ and hoped that the pandemic and related crises would at least serve as a reminder to States of the importance of human rights norms and tools. 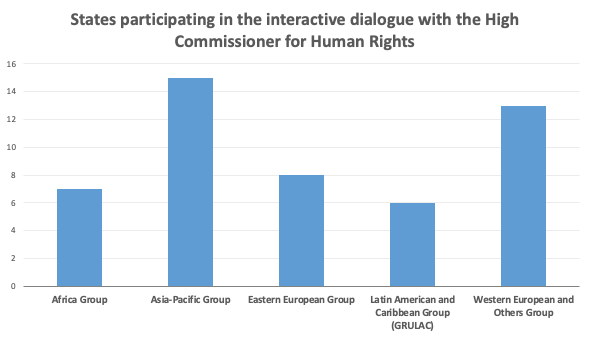 48 States (and the EU) participated in the subsequent interactive dialogue, some speaking on behalf of a group.

Many statements were centred around Covid-19. Luxembourg, Ireland, Greece, Chile and the US all raised concerns that the pandemic had directly caused or responses to it had ushered in restrictions to human rights, particularly civil and political rights, echoing the concerns raised by the High Commissioner. Canada praised the OHCHR for its efforts to ensure human rights were integrated into COVID19 response plans and Indonesia called for ‘vaccine multilateralism.’ Mali said human rights should be strengthened in the international Covid-19 response, while the Netherlands called for a human-rights based approach to building back better.

As in most years, several States criticised the OHCHR for what they perceived as selectivity, double standards and politicisation. Venezuela, Russia, Cuba and Syria specifically denounced unilateral coercive sanctions and welcomed the High Commissioner’s calls to lift them during the pandemic, while Germany defended the use of targeted sanctions in some contexts. In a statement on behalf of the African Group, Cameroon encouraged the OHCHR to do more to ‘to promote respect for differences, and to refrain from imposing narrow cultural standards on others.’

A number of representatives (Chile, Luxembourg, Netherlands, Ireland) agreed with the High Commissioner’s concerns about funding for the OHCHR and Treaty Body system, and its ability to fulfil its mandate. While Luxembourg issued ‘demand[ed] the efficient use of resources,’ Philippines argued that resources should be prioritised toward actions on the ground rather than ‘hostile resolutions.’ The Republic of Korea gave a statement on behalf of the Human Rights/Prevention Caucus, calling for greater cooperation between the OHCHR, Human Rights Council and Peacebuilding Commission and for ‘the pillar to receive necessary resources from the budget to fulfil its mandated activities.’

In her response to the questions and comments, the High Commissioner noted that: 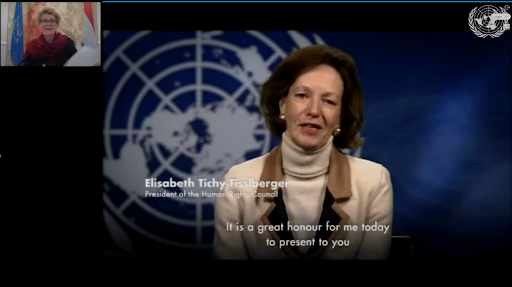 In a brief pre-recorded statement, Tichy-Fisslberger spoke about Covid-19 and the recent work of the Human Rights Council. She described the pandemic as not only a health emergency, but a major human rights crisis. The Council and its mandate holders had adapted well however, and managed to continue their work, with  Tichy-Fisslberger noting that it was the first UN body to resume in-person meetings. The Council held even two urgent debates in this context, on systemic racism, police brutality, and violence against peaceful protests and the situation in Belarus. Tichy-Fisslberger emphasised the importance of implementing change ‘on the ground’, saying the participation of civil society at the Council helps to keep the connection to what is happening on the ground, and the UPR is a ‘critical tool in country-level work’: ‘The work of the Human Rights Council means little without the implementation of human rights standards at the national level.’ Finally, the President raised the impact of the UN liquidity crisis on the Council, including forcing some activities to be postponed, and said she hoped there would be improvements in the coming months. 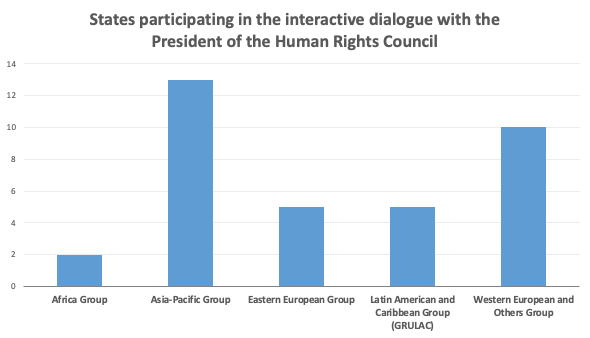 33 States (plus the EU and the Sovereign Order of Malta) participated in the interactive dialogue with the President.

The pandemic was again a common topic. Lithuania and Austria raised concerns about the Covid-19 crisis being used as a pretext for restrictions on human rights, Lithuania mentioning reprisals on NGOs and human rights defenders in particular. The EU said the pandemic had exposed the failures of existing systems to deliver for those more at risk of marginalisation. On a related note, Portugal argued that at a time when multilateralism is under attack and the UN system is more important than ever, the Council ‘has proven to be a fundamental body that can respond to the aspirations of human rights defenders.’

A similar selection of states criticised the Council for politicisation, double standards, selectivity and confrontational actions as in the dialogue with the High Commissioner (Eritrea, Cuba, Malaysia, Philippines, Syria, Iran, Venezuela). Iran and Syria, for instance, criticised country-specific mandates. Iceland, in a statement on behalf of the Nordic-Baltic countries, offered a sharp rebuke to these countries saying ‘Any claims by some of political favouritism should be rejected as baseless attempts to discredit the Council’s important work.’

Occurring only a few weeks after the passage of a landmark resolution on prevention at the Human Rights Council, many states aired their views on the role of the Council in prevention. On the positive side, Austria spoke of the need to improve the linkages between human rights and prevention and Mexico on the need to improve links between the Security Council and the Human Rights Council specifically, to ensure that human rights are central to efforts to prevent conflicts. Indonesia felt the maxim ‘prevention is better than cure’ should apply to human rights too, and hence asked how the Council could better mainstream its work on prevention. Switzerland and Argentina made general comments about improving the links between Geneva and New York.

However, there was wariness from other states. Eritrea felt that the prevention resolution went beyond the mandate of the Human Rights Council and Russia was generally concerned about the broadening of the Council’s powers. In contrast to the comments made by Mexico, Algeria called for caution in building connections between the Council and other bodies, arguing that prevention was best achieved by building resilient societies. Iran too, did not consider promoting human rights issues in the Security Council was ‘constructive.’

Responding to questions and comments from states, the President said: 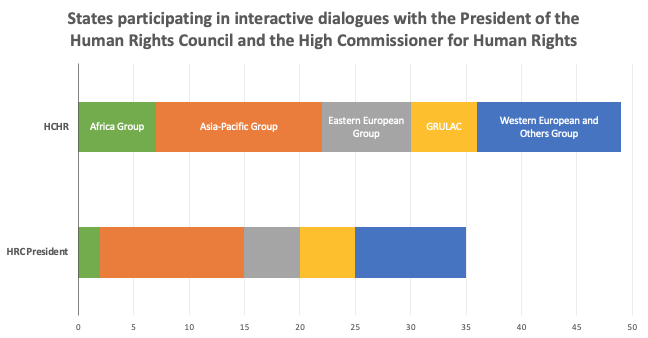