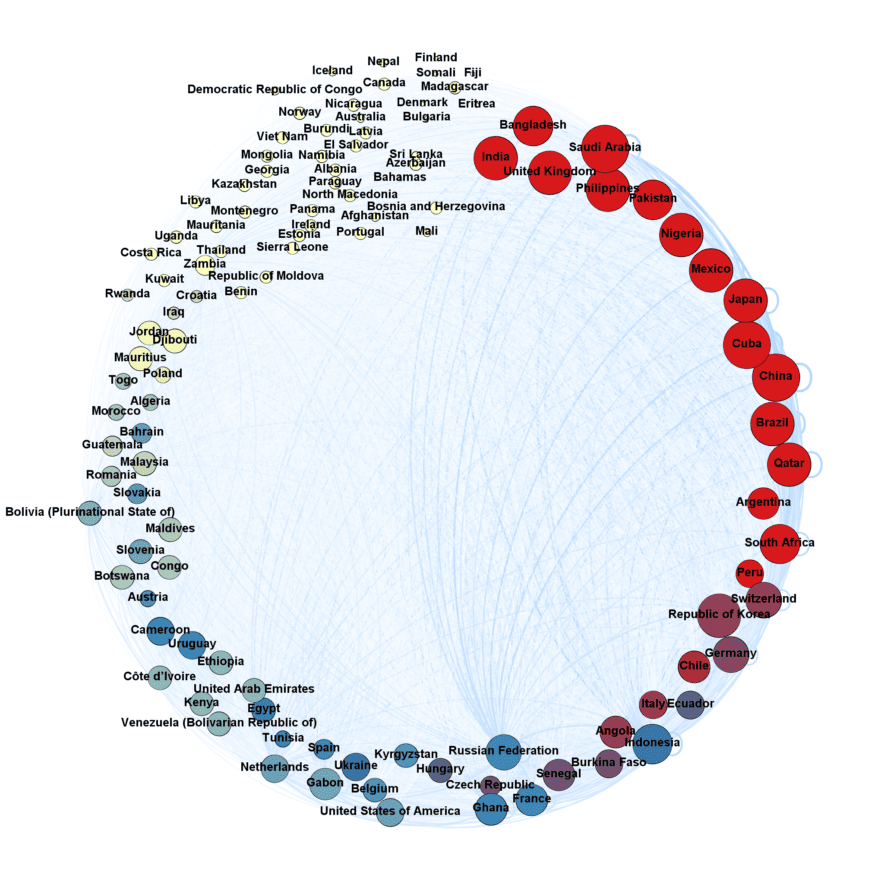 Why do States run for membership of the Human Rights Council? All UN Member States are, in principle, able to participate in and contribute to the work of the Council, either as a member or an observer. So why do some States choose to ‘go the extra mile’ and campaign for a seat on the body? The answer is that while Council membership does not guarantee influence and — seen the other way around — while States can still be highly influential as observers, the fact remains that membership brings with it a number of particular responsibilities and privileges. Regarding the latter, this includes: voting on tabled resolutions; submitting requests for Special Sessions; electing the Bureau; and appointing Special Procedures mandate-holders.

To explore these issues and questions, URG produced a matrix showing every country that has ever held a seat on the Council, the number of their terms, and which other States were members at the same time. The full matrix can be viewed here.

Including those recently elected for the 2019-2021 term, a total of 114 of the UN’s 193 members have served — or are currently serving — at least one membership term. 79 UN member States have never served on the Council. Many of those have never even ran for a seat, and most are Small States, especially Least Developed Countries (LDCs) and Small Island Developing States (SIDS).

Notwithstanding, the number of States that are yet to hold a seat on the Council today — 79  — is a marked improvement on the figure from only three years ago. As of the beginning of 2017, 95 States had never been a member of the Council. This improvement is mainly due to the increase in the number of Small States standing for election over the past two years: e.g. Bahamas, Denmark, Fiji and Iceland.

In addition to these top line numbers, the matrix also shows the number of membership terms (measured by total number of years) enjoyed by different States.

This analysis shows three States — China, Cuba and Saudi Arabia – have enjoyed the highest number of years as a member: each has spent 12 years on the Council (with just the mandatory one year break that all States must take between two consecutive terms). Nine states have spent 11 years as members: Brazil, India. Japan, Mexico, Nigeria, Philippines, Qatar, Republic of Korea, the United Kingdom. The next group with highest numbers — Bangladesh, Indonesia, Pakistan and South Africa — each has been 10 years as a member of the Council.

At the other end of the scale, countries like Finland have only spent one year on the Council (one term of one year, to be precise – because Finland drew the ‘short straw’ in 2006 when the Council had to stagger all new membership terms).

The average time spent as a Council member is 5,35 years. It is interesting to note that the average of the top 25% of States (i.e. the 29 States that have spent the longest time as members) is almost twice as high as this overall average (9,62 years). This strongly suggests the presence of a hierarchy of UN member States: those that believe they have an almost permanent right to sit on the Council (de facto permanent members, if you like) and the rest.

The matrix also allows us to see another membership pattern: namely which countries have tended to have membership terms that coincide with one another. This is done via a ‘network analysis’ (an analysis showing the connections between different membership terms), the results of which are shown in Figures 2 and 3.

This network analysis offers an interesting way to identify and show persistent ‘nodes of influence’ at the Council: i.e. groups of States that have tended to dominate the work and output of the body since 2006.

The network analyses shown in Figures 2 and 3 are based on two variables: the number of years a country has held a seat on the Council, and the number of ‘connections’ with countries that held seats at the same time.

It is important to note that this analysis tells us nothing about the substance of State influence — i.e. the positions they take on different UN resolutions, or initiatives they tend to promote. Clearly, for example, the US and the UK have spent a number of years holding seats on the Council at the same time as China, Cuba and Russia. Yet they have tended to adopt diametrically opposing positions on contentious issues and votes. The analysis is rather solely a way of empirically showing – or, at least, trying to show influence itself, via the presence of States on the Council, and their related ‘connections’ with other members at the time.

Again, the presence of two States on the Council at the same time, does not automatically tell us that they are influencing each other’s position. However, in reality countries that are members at the same time do heavily influence each other — either wittingly or unwittingly. This reality obviously holds for ‘like-minded’ member States, but is also holds (to a lesser degree) for States that may, for example, normally oppose the initiative of another member State, but in the end chose to compromise for fear that the other (voting) member State may attack / vote against one of their priority issues.

The results of our network analysis are displayed below: 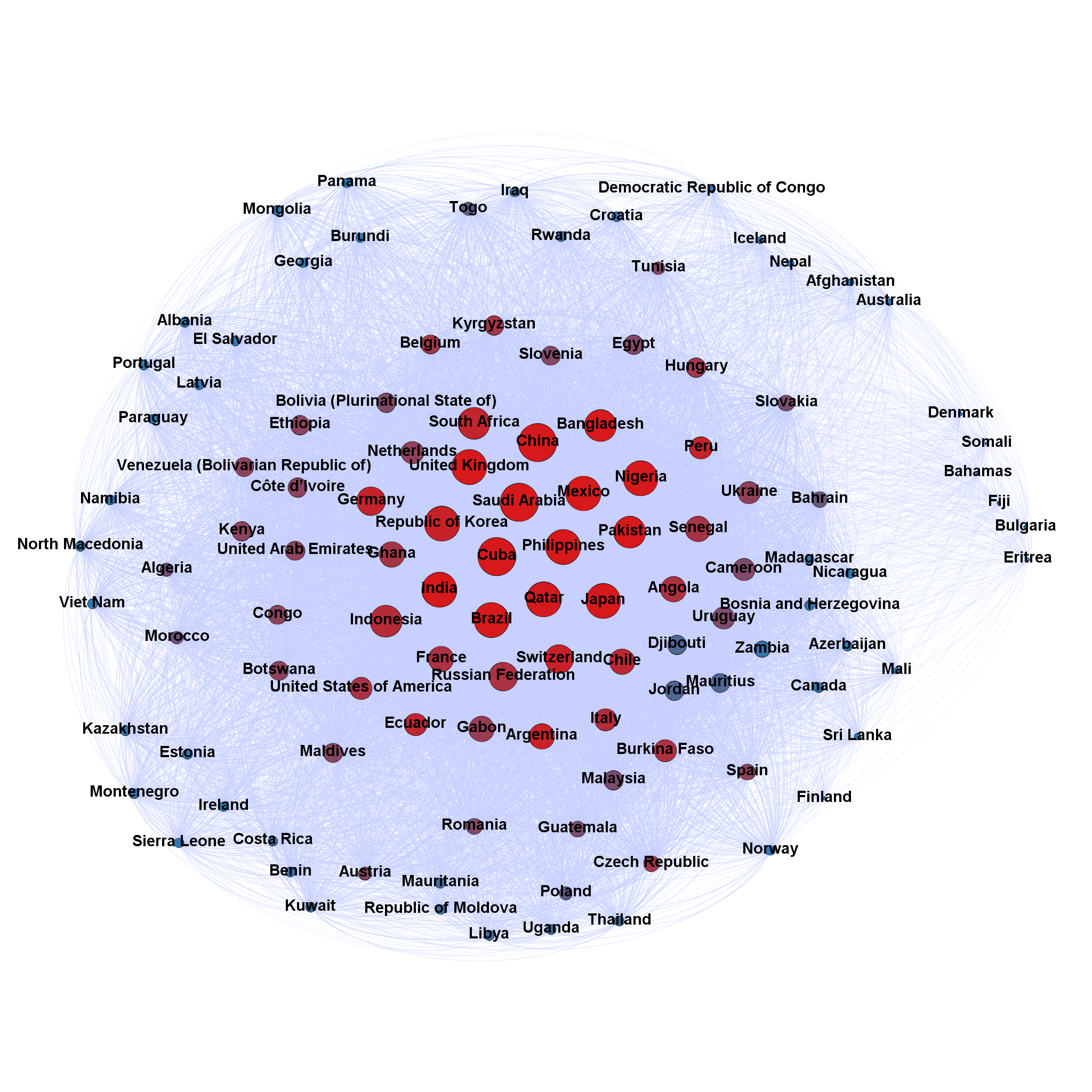 Figure 3. The same network analysis but with States displayed (clockwise from top) according to the number of their membership terms / years spent on the Council 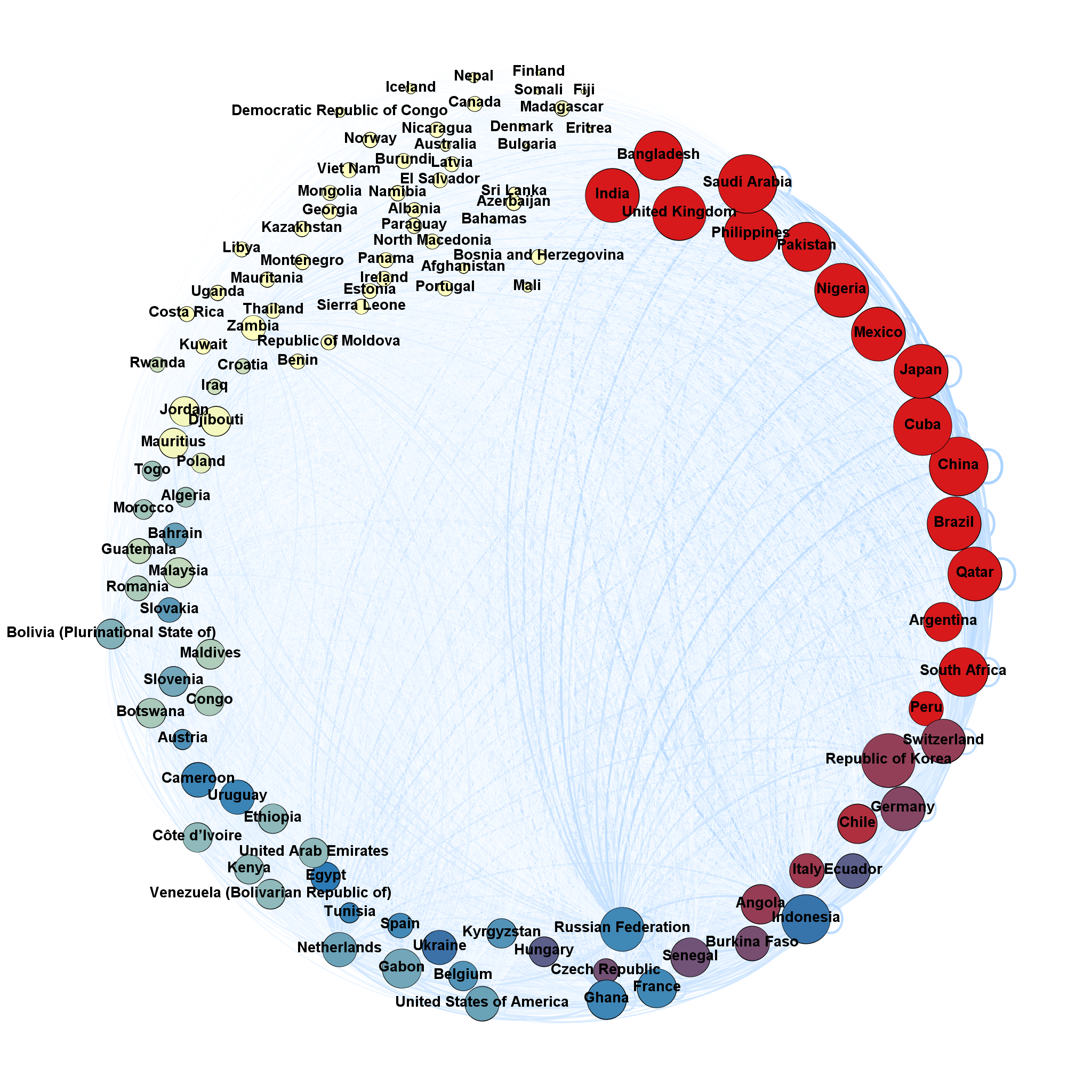