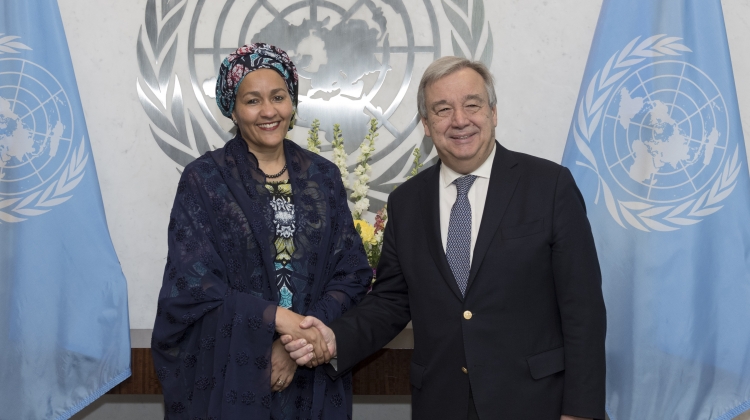 The United Nations System-wide Gender Parity Strategy sets targets for equal representation of men and women in the United Nations, and also advises on recruitment and retention practices. All secretariat units have developed their own implementation plans for the strategy, setting objectives for themselves to achieve parity at all levels. This strategy is being implemented alongside wider UN reforms that deal with the UN’s management system, and reconstituting its development and peace and security pillars. These reforms are intended to improve the efficiency of the UN as a whole, and to also adapt, and respond effectively, to the issues that are occurring in today’s world. So what is the Gender Parity Strategy, and how does it relate to these other UN reforms?

When Secretary-General (‘SG’) António Guterres made his oath of office in 2017, he made it clear that achieving gender parity was a top priority, saying, ‘Management reform must ensure we reach gender parity sooner rather than later.’ This demonstrates that he envisioned gender parity as part of his wider effort to reform UN management systems, creating an early conceptual link between his Gender Parity Strategy and what we now know as the UN reforms. He pledged that by the end of his time as SG, full gender parity will be reached at the Under-Secretary-General and Assistant Secretary-General levels. In July 2017, he presented to the General Assembly a report entitled, ‘Improvement in the Status of Women in the United Nations System,’ , in which the SG emphasized the importance of the heads of all entities coordinating with UN Women on the development and implementation of policies and measures in order to progress towards gender parity.

The SG’s Strategy on Gender Parity is in the same vein as the UN reforms, in that it corresponds with his commitment to create a modern organization and workforce. However, the Gender Parity Strategy is not simply an element of the SG’s UN reform proposals. It is an initiative on its own, though with areas of overlap in work and objectives with the different systems affected by the SG’s Reforms, and with coordination between UN Women and the Secretariat. The strategy provides tools and initiatives to reach parity on the senior levels of leadership by 2021, and ultimately across the board by 2028. In 2017, the SG also presented a report to the General Assembly that included a strategy to improve the organization’s system-wide approach to preventing and responding to sexual exploitation and abuses. The SG said, ‘I am convinced that the greater number of women throughout UN activities, and especially within uniformed contingents, would help advance UN efforts to prevent and respond to sexual exploitation and abuse.’

Following an election with particular attention to gender and female candidates, the SG from the very beginning of his tenure has made sure to prioritize and promote gender equality. Yet in his flagship initiative, the UN reforms, the terms, ‘women,’ ‘gender’ or ‘gender parity’ are not mentioned in any of the foundational resolutions. This is particularly surprising given that the SG had stated that UN management wouldn’t be complete without gender parity, and given that management essentially deals with the way in which the UN runs, as well as how the UN recruits and retains personnel.

In terms of how the reforms are publicized and explained to the public, the Gender Parity Strategy is included on the same UN site as the latest reforms, United to Reform, but is set apart from the three other streams of change, Management, Development and Peace and Security. It may be separated from the others to demonstrate that it is a separate line of work, while connected to the overall goal of a modern and efficient UN, and perhaps to ensure it is granted sufficient attention. However, one would think it would be beneficial if connections between this strategy and the reforms were more explicit, both for the implementation of this strategy, and the ability of those outside the UN to properly understand it.

UN Women is playing a role in implementing the Gender Parity Strategy, and ensuring it is availed to the best of its ability. As UN Under-Secretary General and UN Women Executive Director, Mlambo-Ngcuka recently acknowledged, ‘UN Women continues to actively support the implementation of the SG system-wide Strategy on Gender Parity.’ The strategy includes six UN Women specific recommendations. These comprise creating guidelines on enabling an inclusive and efficient working environment, working with civil society to encourage shadow reporting on the implementation of the strategy, measures to increase gender parity in peace operations, creating a database for female national officers, and developing a communications strategy to strengthen messaging and implementation. As of 2018, only 3% of peacekeepers were women. The strategy aims to build an enabling environment by including measures such as family-friendly policies, flexible working arrangements, and appropriate standards of behaviour. This is not the first time the UN has tried to reach gender parity. However, as Ana Maria Menendez, Senior Policy Advisor to the SG and leader of the UN internal Gender Parity Strategy said in 2018 at the 62nd Session of the Commission of Status of Women, ‘This time, we have a road map.’

The concept of gender parity in the UN is not a new idea. The Group of Friends for Gender Parity have been pushing for this aim since 2016. The Group of Friends for Gender Parity emerged from a campaign calling for a female Secretary-General. Their goal is to promote gender parity, and female leadership. When Guterres was appointed, their efforts could have influenced the SG in introducing the Gender Parity Strategy for the UN.  While the Gender Parity Strategy functions outside of but connected to the UN reforms, it shares the objective of  achieving a more modern UN. However, the successes or failures of these reforms will have some form of impact on the strategy, given the overlaps on gender with development and peace and security initiatives, as well as human rights.

Despite its merits, the strategy has had its share of backlash. As was said earlier, it has been successful in regards to appointing women to senior positions of management. Difficulties remain in regards to funding cuts which lead to downsizing, which ultimately leads to a restriction of mid-level positions. In addition, the peace and security sector continues to be male dominated. There is also a possibility of political interest in it fading, if Member States do not fully support this initiative. It is essential that the interest in the Gender Parity Strategy does not fade, because as Menendez said recently: ‘unless power is shared, this (the UN) is not going to go anywhere.’

While much attention is paid to gender-related violence in conflict and gender disparities in communities the UN works with, all levels of violence and discrimination against women are connected, and it is promising to see that Gender Parity, even if not explicitly mentioned in the management reform resolutions, is an initiative undertaken to correct workplace discrimination and inequalities at the Secretariat. In the age of #MeToo and #TimesUp, one cannot turn a blind eye to various forms of discrimination, as it is clear what happens when no one stands up. This starts by addressing gender parity more in the UN reforms. Even though the Gender Parity Strategy is separate to the UN reforms, they are similar in that they both aim to modernize, and advance the United Nations positively. Having more women involved in the UN is sure to make the environment a more equal, and well-rounded space. It is essential to include more women in general discussions and programmes to bring different perspectives and ideas to the table, and this will happen with the Gender Parity Strategy. As Dean Peacock, co-founder of Sonke Gender Justice, said, ‘If half the world’s population is denied the opportunity to manifest their full potential, then we all lose.’

If one would like to read more on what the Universal Rights Group has produced regarding gender, then this and this should be of interest. To learn more in relation to the Gender Parity Strategy, and the UN reforms, this and this will be helpful.