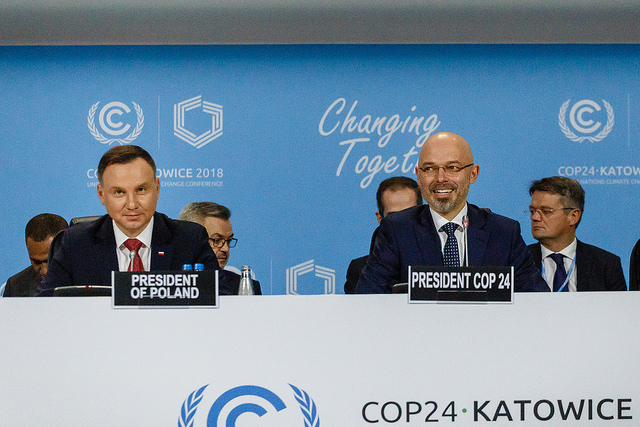 Two concurrent news stories, seemingly unrelated. First, the 70th anniversary of the Universal Declaration of Human Rights, a moment in history reflecting humanity’s ambition for a more just and equal world. Second, world leaders gathered in Katowice, Poland, to finalise the rules for implementing the 2015 Paris Agreement on climate change.

In fact, these two events are closely connected. True, the Universal Declaration of Human Rights does not mention climate change. This issue was not on the world’s radar screen back in 1948.

Today, however, climate change is causing grave human rights violations around the world, and threatening far worse violations in the foreseeable future. Stronger and more frequent storms, heat-waves, droughts, floods, wildfires and other climate-induced disasters can violate the rights to life, health, food, water and culture, as well as the right to live in a healthy and sustainable environment.

The World Health Organization estimates that climate change is already causing 100,000 premature deaths every year, a number likely to rise to 250,000 by 2030. Millions of people are migrating from their homes because of climate change, no longer able to grow enough food to survive, or unable to access adequate water supplies.

The 2015 Paris Agreement represented a major breakthrough, acknowledging for the first time in an international treaty the connection between human rights and climate change.

The focus of the negotiations in Poland is on developing the detailed rules that will govern the implementation of the Paris Agreement. It is essential that human rights principles and safeguards be incorporated into the new rulebook.

When actions are taken in the name of addressing climate change, human rights must be respected. For example, relocating entire communities in order to flood lands as part of hydroelectric projects can violate human rights, unless prior consent is obtained.

The recent report of the Intergovernmental Panel on Climate Change called for ‘rapid, far-reaching and unprecedented changes at all levels of society’ in order to prevent dangerous climate change with potentially cataclysmic consequences.

Last month, UN Environment reported on the disturbing gap between projected greenhouse gas emissions in 2030 and the much-lower level of emissions needed to ensure a safe climate. This gap shows that existing laws, policies, and other efforts to reduce emissions are completely inadequate.

In response to the failure of governments to address the climate crisis, courts are beginning to play an important role, often by enforcing human rights obligations. There have been climate lawsuits based on human rights in at least ten countries, including the Netherlands, Colombia, the United States, Canada, Belgium, Norway, Ireland, Pakistan, the United Kingdom, Germany, and Switzerland.

So far, the two most important court decisions on climate change and human rights were resounding victories, both decided in 2018. The Supreme Court of Colombia, in a lawsuit brought on behalf of 25 children and young people, ruled that deforestation in the Amazon rainforest violated their constitutional right to live in a healthy environment. The court gave the Colombian Government four months to develop and begin implementing a plan to eliminate deforestation.

In the Netherlands, the Hague Court of Appeal confirmed a trial judgment that found the Dutch Government’s failure to take bold actions to reduce greenhouse gas emissions violated its obligations under the European Convention on Human Rights. The court rejected the Government’s argument that its emissions are globally insignificant, finding instead that the Netherlands had an increased responsibility because of the great wealth generated by its use of fossil fuels.

We have the laws, policies, and technologies needed to pivot swiftly away from fossil fuels towards a completely renewable energy future. Implementing these solutions is essential to fulfilling human rights, and would lead to a cleaner, greener, healthier and happier world. As we celebrate the 70th anniversary of the Universal Declaration of Human Rights, it is vital that we redouble international efforts to address one of the greatest threats to human life, rights and dignity in the 21st Century: climate change.

David R. Boyd is the UN’s Special Rapporteur on human rights and the environment and a professor at the University of British Columbia.

He is headed to Fiji this week on a country mission that will take him to Vunidogoloa, a community relocated from its ancestral site beside the ocean because of climate change. More than 40 other coastal communities in Fiji are awaiting relocation.