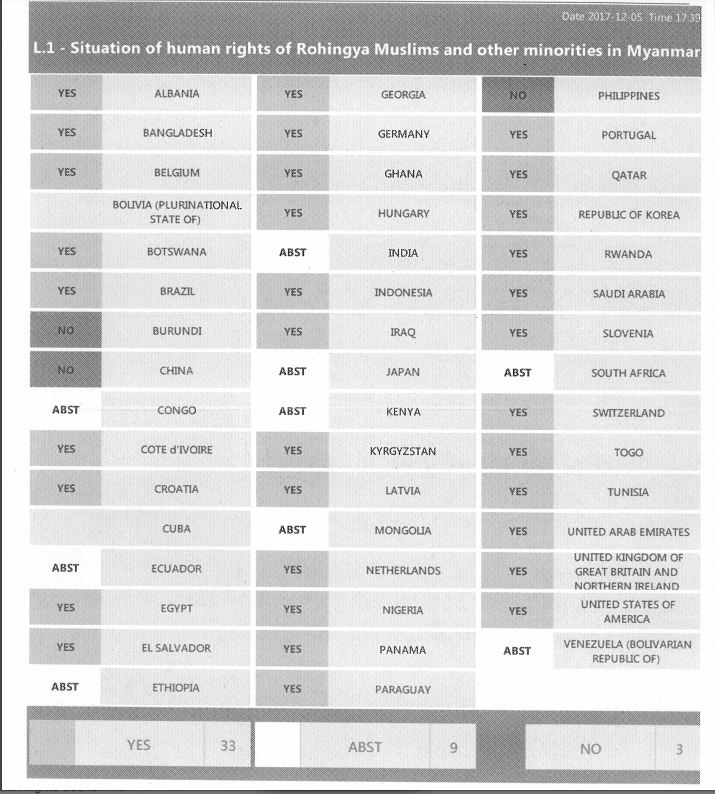 In UN human rights forums, African States have a reputation for voting as a bloc, obstructing human rights, and defending the sovereignty of developing countries. Indeed, in 2011, Bertrand Ramcharan, a respected human rights scholar and a former acting UN High Commissioner for Human Rights, complained that the African and Asian Groups, which together occupy 26 of the Human Rights Council’s 47 seats, had been banding together to prevent the Council from discussing and criticising a range of human rights violations.[1]

A recent report, written in the Department of Political and International Studies at Rhodes University and published by the South African Institute of International Affairs, examines the records of 14 African countries that served on Human Rights Council during 2017.[2] The report focuses on the positions these countries took on 2017 resolutions dealing with country-specific situations and with civil and political rights issues.

The origins of the report, with students writing the country-chapters, lies in recent debates and protests on South African university campuses about the need to ‘decolonise the curriculum.’ The report – an example of Africans doing research on Africa – seeks to respond to this concern.

The findings of the report challenge various pieces of received wisdom. Contrary to the established view that African States always vote as a bloc, the report shows that – at least as far as country-specific human rights problems and civil and political rights are concerned – African States rarely vote in unison. The report covered 33 votes (19 on resolutions and 14 on so-called ‘hostile amendments’). On only three votes – two on racism resolutions and one on an anti-LGBT ‘Protection of the family’ resolution – did African States all vote in the same way.

The sovereignty principle might provide weak States with some protection against the powerful, but African States are surprisingly willing to go along with and even support intrusive measures against States that violate human rights. For instance, Somalia and Djibouti sponsored a resolution to have a UN expert examine human rights in Eritrea, which was adopted without any opposing votes. In December 2017, most African States voted in favour of a resolution condemning the persecution of the Rohingya people of Myanmar and authorising a number of investigations into their plight. In the case of Burundi, the African Group’s record is blemished but not discouraging. In September 2017, the Council adopted two resolutions on Burundi. The first was an African Group-sponsored resolution that was effectively an attempt to cover up recent violations in the country. Twelve out of the thirteen African Group members voted for this resolution. The second, EU-sponsored resolution was much more intrusive – it sought to extend the mandate of a Commission of Inquiry on human rights crimes in Burundi. Two African States (Botswana and Rwanda) voted for the EU’s resolution and six did not oppose it.

To conclude, the Council, just like its predecessor the Commission on Human Rights, is often criticised for admitting rights-violating States as members. Nikki Haley, the Trump administration’s first UN ambassador, made reform to the Council’s membership one of the US’ conditions for not withdrawing from the body.[3] Only four African members of the Council in 2017 – Botswana, Ghana, South Africa and Tunisia – were regarded as ‘free’ according to Freedom House’s categorisation. If domestic respect for human rights were a strict criterion for membership, Africa’s five ‘not free’ 2017 members – Burundi, Congo, Egypt, Ethiopia and Rwanda – would probably not have been on the Council. However, the report shows that things are more complicated than this. More repressive States can sometimes be strong proponents of international human rights standards, while States that respect rights at home may oppose or fail to support them at the international level. In this regard, Rwanda, which is not considered to have a strong domestic human rights record, has one of Africa’s best records on the Council. By contrast, as South Africa’s failure to support critical country-specific resolutions (other than on Israel) and its support for a Chinese amendment attacking civil society show, a positive domestic rights record is no guarantee of strong support for human rights at international level.

[3] Nikki Haley, ‘Remarks at the Graduate Institute of Geneva on “A Place for Conscience: The Future of the United States in the Human Rights Council”,’ 6 June 2017, https://usun.state.gov/remarks/7828