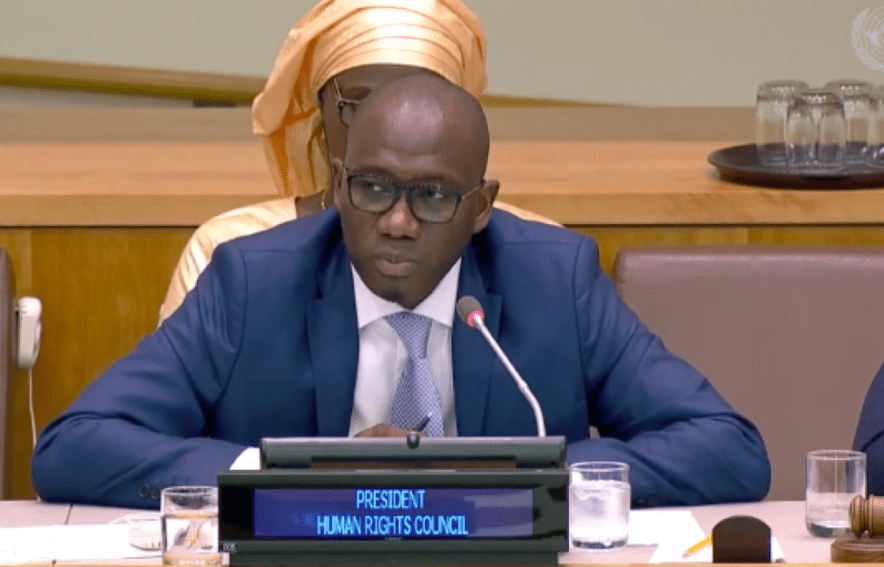 As part of the 74th Session of the UN General Assembly, the High Commissioner for Human Rights and the President of the Human Rights Council (Council) gave statements to the Third Committee at UN Headquarters in New York City and engaged in an interactive dialogue with member States. These interactions provided an opportunity for a discussion of cross-cutting human rights work and priorities, as well as ideas for cooperation between Geneva and New York.

On 15 October, the High Commissioner for Human Rights, Ms Michelle Bachelet, addressed the Third Committee and then responded to questions, concerns, and complaints from member States. Watch the full speech and interactive dialogue here. 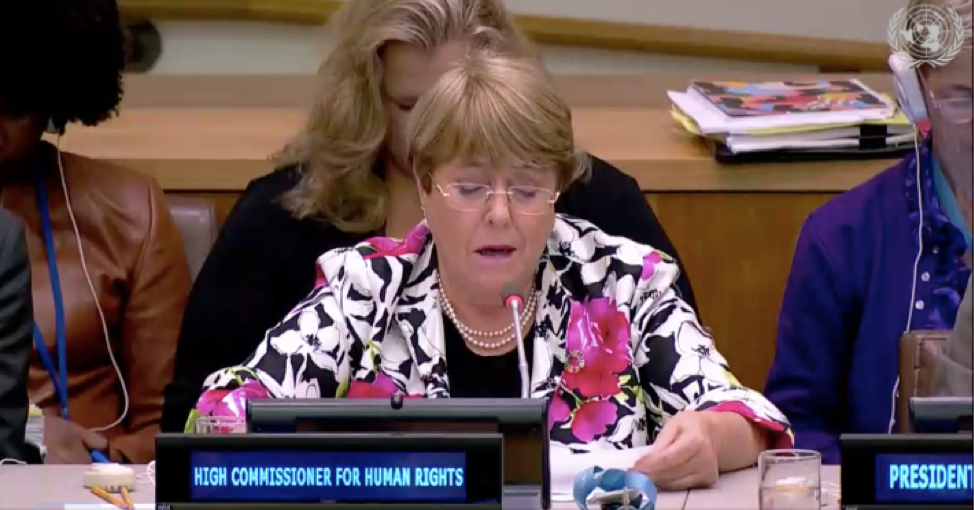 Ms. Bachelet outlined growing threats to human rights, such as xenophobia, hate speech, inequality, and ‘push-backs on women’s equality and the rights of minorities.’ She also highlighted the climate emergency as an imminent threat to the enjoyment of human rights, noting that her office has recently has signed a Memorandum of Understanding with the UN Environment Programme (UNEP).

Regarding the Universal Periodic Review (UPR), she pointed out the significant increase in States’ acceptance of the recommendations of the UPR, now at 75%. She stated that issues of substance raised during the UPR ‘often mirror the recommendations issued by the Special Procedures and Treaty Bodies, as well as by my office. Together, they form a cross-section of critical human rights gaps at the country level, which, if addressed, will build more resilient societies, and sustain development and peace. There is great potential for better and more focused use of human rights recommendations in system-wide action across the UN; such concerted action is supportive of the Secretary General’s emphasis on prevention, as well as the 2030 Agenda.’

Ms Bachelet also emphasised the need to mainstream human rights: ‘the entire UN Human Rights system can be very helpful in identifying early warning signs that could lead to prevention in the peace and security area and the development area.’ She advocated for the presence of human rights in the prevention of conflicts and the pursuit of transitional justice.

Lastly, Ms Bachelet stated that the underfunding of the Office of the High Commissioner for Human Rights (OHCHR) and the human rights pillar more broadly hampers their work and holds back the entire treaty body system (set to undergo a review in 2020). She urged member States to make voluntary contributions so that OHCHR may continue their work. She noted that this underfunding for the work of the human rights pillar creates a ‘credibility crisis’ and constitutes a denial of justice for victims for human rights violations.

Forty-three States, speaking individually or on behalf of a group, participated in the subsequent interactive dialogue (see Figure 1).

Figure 1. Participation in the Interactive Dialogue with the High Commissioner for Human Rights. 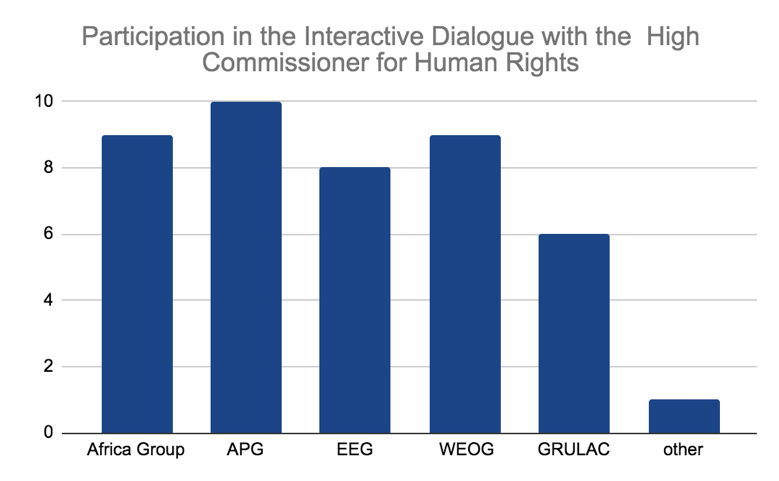 A few States advocated for the use of international human rights mechanisms in response to specific human rights violations in other States, while States who remain the subject of country-specific resolutions at the Council decried what they described as the politicisation of the Council’s work.

On specific areas of concern to States, Mexico asked how States can take a human rights-based approach in responding to hate speech, and Morocco welcomed the High Commissioner’s efforts to uphold human rights in the digital era. Several States, including Djibouti, supported the role of the OHCHR in addressing the human impact of climate change. Zambia, on behalf of the Africa Group, called for more geographical representation among OHCHR staff, while the Nordic countries highlighted an erosion of democratic and civil society space alongside an escalation in reprisals against those cooperating with the UN system.

Romania called for the international community to be more proactive in preventing human rights violations, while Senegal pointed out that when it comes to early warning ‘human rights can play an important role in preventing conflict and sustaining peace.’ Senegal also called for better coordination between the Human Rights Council and OHCHR with the Security Council and the Peace-building Commission in order to achieve a common UN approach to prevention. As a Security Council member, Germany pledged to extend invitations to the High Commissioner. Canada asked how the work of Special Procedures can be better mainstreamed through the UN system, including in development, and peace and security.

Several States echoed the High Commissioner’s concerns about resource constraints. Ireland noted that they are acutely aware of the disconnect between ambition and resources and that if member States are serious about supporting multilateralism, they need to provide sufficient support for international instruments.

In her reply, Ms Bachelet noted a few key points:

On 1 November, Council President Mr Coly Sek presented the Resolution on the Human Rights Council A/74/53 to the Third Committee. Watch the full speech and interactive dialogue here. 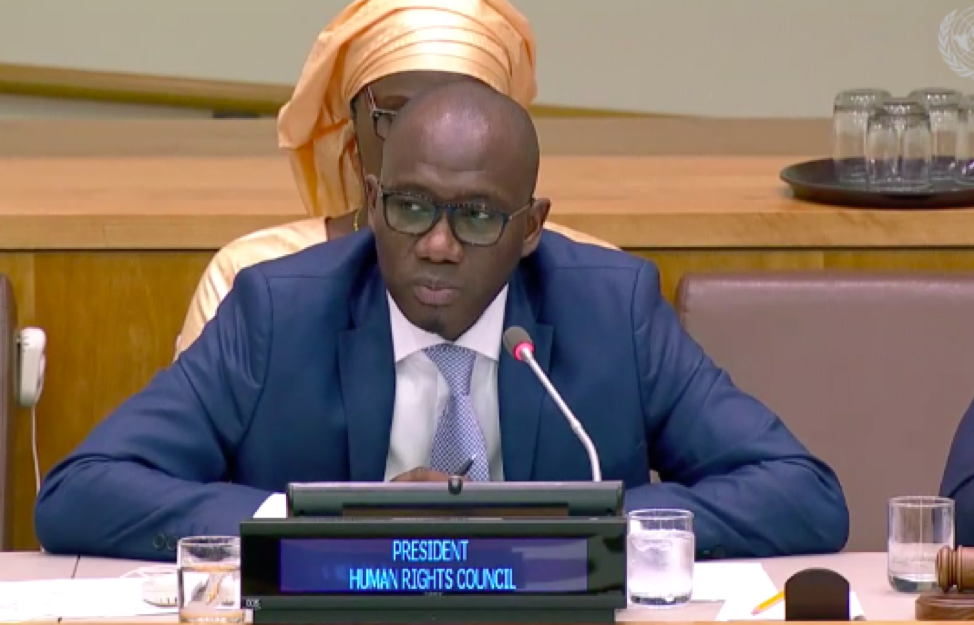 In his statement, Mr Sek emphasised the importance of the wide participation of stakeholders in the work of the Council. He noted that all States have undergone the UPR process at least twice. He also pointed out that civil society plays a crucial role ensuring that the work of the Council is relevant to events and actors on the ground and that it is ‘essential to ensure that civil society can participate actively in the Council.’ He commended efforts by Least Developed Countries (LDCs) and SIDS to participate in the Council, noting that the Special Trust Fund for these groups allowed for the involvement of 33 delegates from 32 of such countries, including 11 SIDS that do not have permanent representation in Geneva. He encouraged more states to contribute funds to allow for the ‘essential contribution of these States’ to the work of the Council.

Figure 2. Participation in the Interactive Dialogue with the President of the Human Rights Council.

Several States reiterated the importance of the Council’s work, with Angola pointing out that this body represents a recurring opportunity to bring States together to tackle challenges. Some States pointed out the value of engagement with specific Council mechanisms such as Special Procedures and the UPR. The Maldives also called for the international community to assist Small Island Developing States (SIDS) in tackling the human impact of climate change, while Ireland pointed out that neither the Human Rights Council, nor the wider UN system, can function properly without civil society access and engagement.

Multiple States raised the spectre of the upcoming Council review (for more on the ongoing discussion on this subject see URG’s report on ‘Perspectives on the future of the Human Rights Council (Glion VI)‘). Morocco urged a ‘high degree of harmonisation’ between Geneva and New York as necessary for the review to yield positive results. Praising the continuous efforts by the Council to enhance its efficiency and effectiveness, Japan also called for States at the Third Committee to pay attention to reducing duplication and to the rationalisation of resolutions. Chile raised the importance of transparent discussions between Geneva and New York, as well as consultations with all stakeholders, including civil society.

Chile also noted that the Council is an effective body for prevention, with Switzerland pointing out that as violations of human rights and lapses of guarantees of basic freedoms are key indicators that peace and security are in danger, human rights belongs at the heart of conflict prevention. Bangladesh stated the importance of strengthening the Council’s work in addressing emerging issues of concern. Noting the critical role of the Council in providing the international community with reliable and objective reports on these issues of common concern, Australia added that it is also important that when these issues are raised, where relevant the Third and Fifth Committees of the General Assembly must act decisively. Botswana suggested that States seek to improve the relationship between the Third Committee and the Council to ensure that the UN speaks with one voice in addressing human rights violations. Ireland stated that human rights are intrinsic to the work of the whole UN system, as human rights violations are a sign of insecurity and threat to development. Iran, however, expressed their concern that Human Rights Council engagement with, for example, the Security Council, could be problematic given the risks for politicisation.

Iceland, on behalf of Nordic and Baltic countries, pointed out that some Council improvements are up to member States, such as in ensuring that all Council members uphold the highest standards for the protection and promotion of human rights. Australia added that no State that ‘permits or commits serious human rights violations should have a seat at the Council,’ even when regional groups present clean slates during Council elections.

In his reply, Mr Sek made the following key points:

On 7 November at UN Headquarters the Third Committee voted to pass Resolution A/C.3/74/L.56 on the Human Rights Council, by a vote of 115 in favour, four opposed, and 60 abstaining. 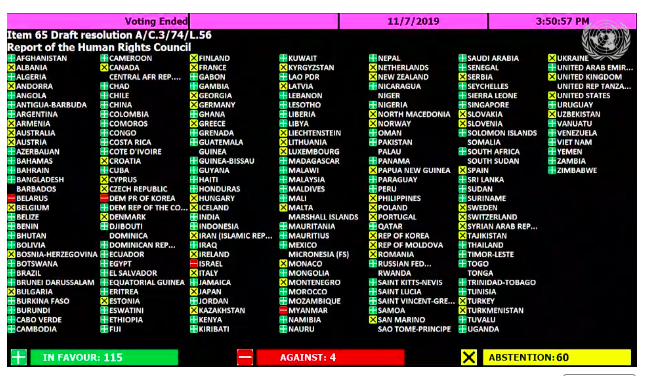 Read more about this vote in the URG NYC’s upcoming Post-Session Report on this year’s Third Committee.

Curious about how these presentations and interactive dialogues went last year in 2018? Read URG NYC’s blog on the High Commissioner’s speech here and the Human Rights Council President’s speech here.