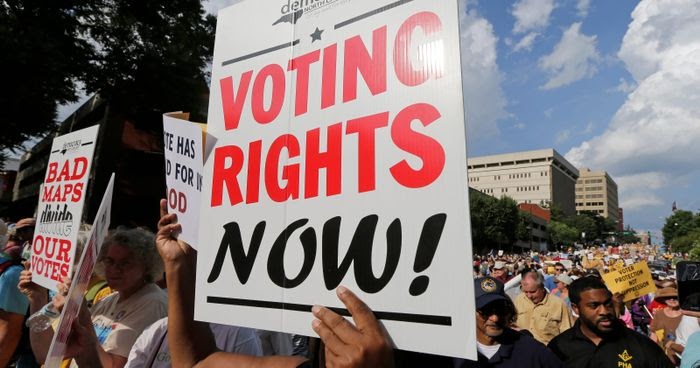 State lawmakers across the US have recently sought to pass legislation which will significantly limit voting access. These attacks on voter rights come on the heels of repeated claims that the 2020 presidential election was marred by widespread voter fraud. The claims are rooted in former Republican President Donald Trump’s ‘Big Lie’: that the election was stolen from him. Republican lawmakers argue new legislation is needed to prevent voter fraud. In actuality, the bills are rooted in misleading claims and will disenfranchise thousands of voters in the US, particularly minority communities.

The Republican-led effort to restrict voting rights at the state level also has the potential to undermine US electoral commitments under international law, and runs contrary to internationally recognised democratic standards regarding the electoral process.

What was the Big Lie?

The COVID-19 pandemic posed significant challenges to in-person voting during the November Presidential election. States had to adapt, and many chose to expand mail-in voting. Trump claimed for months leading up to the election that increased mail-in voting would lead to widespread fraud. His attacks continued well past election day, telling his supporters that the election had been ‘stolen’ despite there being no evidence of widespread fraud. According to a December Quinnipiac poll, 77% of Republican voters believe there was widespread voter fraud in the 2020 election. Studies continue to demonstrate, however, that instances of voter fraud are so rare that it ‘could not and does not happen at the rate even approaching that which would be required to “rig” an election.’

Trump’s lie also included ‘options that were at-hand to supposedly reclaim [the presidency]’. Each time politicians or the media refuted or ignored these ‘options’, Trump’s supporters were led to believe that ‘the alleged conspiracy went deeper than just voter fraud.’ Timothy Snyder, one of the first to refer to Trump’s conspiracy as the ‘big lie’, cautions of the severity that sowing such distrust can have. Blaming one’s personal defeat on others and injecting a big lie into the system, Snyder explains, ‘puts democracy at great risk.’

As of 19 February 2021, the Brennan Center for Justice counted 253 bills at the state level which have been carried over, prefiled, or introduced with provisions that restrict voting access in 43 states. Republican lawmakers continue to argue that legislation is necessary to clamp down on voter fraud while Democrats argue that more restrictive policies curb civil liberties. The bulk of Republican-led legislation seeks to ‘1) limit mail voting access; 2) impose stricter voter ID requirements; 3) slash voter registration opportunities; and 4) enable more aggressive voter roll purges.’

The US historically struggles with voter turnout. Out of the 35 OECD member states for which estimates of voting-age population in the most recent national election were available, the US ranked 24th. Systemic inequalities have long plagued the electoral process in the US. Long lines at polling places disenfranchise wage workers, who do not get paid time off to vote. Many voters have to travel long distances to polling places or ballot drop boxes, particularly Native Americans living on reservations. Other policies like voter ID laws disproportionately impact minorities in the US who are less likely than white voters to have accepted forms of identification. But expanded mail-in voting increased voter turnout in the 2020 election, up seven percentage points from 2016.

Republican lawmakers in Georgia have introduced one of the most restrictive bills in the country which ‘proposes tougher restrictions on both absentee and in-person voting, among other sweeping changes to election laws’. House bill 531 passed by a vote of 97-72. It limits early voting on Sundays to one optional Sunday in each county, restricts access to ballot drop boxes by requiring them to be located in early voting sites and implements stricter voter ID, among other policies. The state Senate also passed a bill to end no-excuse voting by mail, a policy first implemented by Georgia Republicans in 2005. In an poorly veiled effort to discourage voters, new legislation in Georgia would also make it a misdemeanor to provide free food and water to those waiting in line at polling places. The proposed changes would predominantly affect the larger, minority-heavy Democratic areas of Georgia, which, in addition to helping elect Joe Biden, flipped two US Senate seats from Republican to Democrat.

In Texas, bills proposing limits on early voting hours would cut those in urban, Democratic cities. Legislation in Arizona would require voters to send in photo copies of driver’s licenses or other forms of identification with their mail-in ballots.

The right to vote is guaranteed both by the US Constitution and is enshrined in international law. This means that restrictions on an individual’s right to vote are potentially unconstitutional under US law, and illegal under international law. After analyzing over 200 international laws, The Carter Center created a comprehensive list of obligations and standards for the electoral process. For example, the right and opportunity to vote, one of the obligations, is guaranteed under the International Covenant on Civil and Political Rights (ICCPR), which the US has ratified with reservations. Article 25(b) of the ICCPR states ‘every citizen has the right to vote and to be elected at genuine periodic elections which shall be by universal and equal suffrage and shall be held by secret ballot, guaranteeing the free expression of the will of the voter.’ The US is also a signatory to the American Convention on Human Rights and the International Covenant on Economic, Social and Cultural Rights, both of which outline key obligations related to the right to vote.

While the US is not party to every treaty making up the international normative framework for the electoral process, it is important to recognise that new legislation in the US is reductive to international efforts to uphold standards critical for sustainable democracy. For example, Article 6.1(b) of the Convention concerning Indigenous and Tribal Peoples in Independent Countries states that ‘Governments shall: Establish means by which these peoples can freely participate, to at least the same extent as other sectors of the population, at all levels of decision-making in elective institutions.’ Policies like moving drop-boxes further away from reservations means that the pathway for Native Americans to cast a vote becomes more difficult, restricting their ability to ‘freely participate, at least to the same extent’ as other Americans. Another standard, established by the Handbook for European Union Election Observation Second Edition, states that the late opening or early closing of polls undermines the right to vote. The US has recognised this as good state practice yet is continuing to advance legislation at the state level that would do just this.

Republican lawmakers are also looking to expand voter roll purges, the process by which the list of registered voters is periodically ‘cleaned’ in order to remove individuals who are deceased, have moved, or have not voted in numerous previous elections. Republicans argue that roll purges are needed to maintain an up to date record of registered voters and, again, to reduce the potential for fraudulent votes (i.e. ballots cast on behalf of a dead person). Democrats and liberal advocacy groups worry that this practice hurts voters, as many ‘low income, monitory and young voters do tend to move around a lot.’ According to article 2(d) of the Convention on the Standards of Democratic Elections, Electoral Rights and Freedoms in the Commonwealth of Independent States ‘every citizen is guaranteed the right to receive information on their inclusion into the voters’ list, to correct that information in order to assure its completeness and reliability.’ Individuals who have been purged in the US have, at times, not been given adequate notification of their removal from the registry and do not realise until they do not receive an absentee ballot, at which point it is too late to vote, or attempt to cast a ballot on election day. Because many states do not permit same day voter registration, these individuals are unable to exercise their right to vote. Again, while the US is not party to this regional agreement, it demonstrates how new legislation violates internationally recognised election standards.

A rebuke at the federal level

On 7 March 2021, President Biden signed an Executive Order on Promoting Access to Voting. The Order asserts that it is the ‘responsibility of the Federal Government to expand access to, and education about, voter registration and election information, and to combat misinformation, in order to enable all eligible Americans to participate in our democracy.’ The Order also directs all federal agencies to ‘consider ways to expand citizens’ opportunities to register to vote and to obtain information about, and participate in, the electoral processes.’

Lawmakers in Congress are also working to pass the For the People Act, or HR1. Key points of the bill include ‘creating a national system for automatic voter registration, putting in transparency requirements for political advertising, and instituting nonpartisan redistricting commissions to end partisan gerrymandering.’ HR1 establishes federal voting requirements, like mandating all states to offer no-excuse absentee ballots, ensuring that voting rights cannot be manipulated election by election. Congressional Democrats are also hoping to pass that John Lewis Voting Rights Advancement Act which would restore the preclearance requirement of the Voting Rights Act, repealed by the Supreme Court in 2013, requiring states with the most egregious histories of limiting voting rights to get approval from the federal government before changing any election laws. According to a survey from Data for Progress, the bill is supported by 56% of Republicans, 68% of Independents and 77% of Democrats. This indicates that the general public does support election reform, but not necessarily that which is based on false claims of widespread fraud as Republican lawmakers continue to argue.

The United States might be considered a dualist system, meaning that ratification of a given international treaty does not always supersede national law. But this does not preclude the US from living up to internationally recognized standards for elections and democracy, which HR1 and the John Lewis Act will bring the US closer to doing.