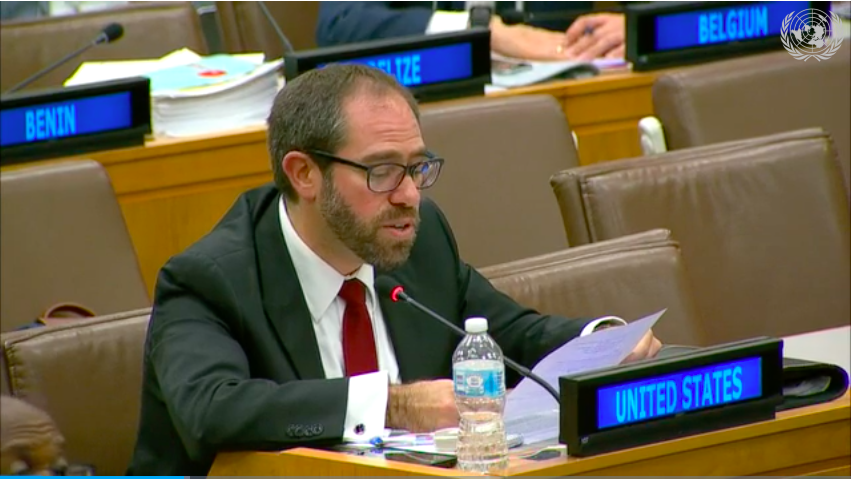 Events over the past week hold out the tantalizing possibility that the US, which walked away from the Human Rights Council in June, is now, if not yet fully regretting its decision, at least flirting with the Council and its mechanisms and, more importantly, flirting with the idea of getting back together.

First, on 2 November at a meeting of the GA’s Third Committee in New York, the US delegation responded to a presentation of the Council’s work in 2018 by the body’s President, Vojislav Šuc, by welcoming recent developments at the Council, including the adoption of a resolution (led by Latin American States) on the grave human rights situation in Venezuela, and steps by the Council President to strengthen the body’s efficiency and make its programme of work fairer and more balanced. Based on this ‘limited progress,’ the US said it was now beginning to ‘see the promise of a body that should be a leading human rights body in the international system.’ Should such progress be continued, the US suggested, it would ‘reinforce our willingness to one day re-engage with a reformed, improved and strengthened Human Rights Council.’

Then, on 5 November in Geneva, the US delegation to the Human Rights Council (although it is no longer a member, it remains an observer) surprised many by participating actively in the 31st session of the Universal Periodic Review (UPR) working group, through which the human rights record of each and every UN member States is reviewed. For those not familiar with the intricacies of the UN human rights system, this is significant because the UPR, unlike other UN human rights mechanisms such as Treaty Bodies, is a mechanism of the Council. Thus, the US was, in effect, participating in a meeting held under the overall auspices of the Council (though with enough constructive ambiguity to leave it up for debate as to whether it was engaging with the Council itself). (In truth, the US possibly felt it had not option but to participate because the human rights records of both China and Saudi Arabia were under consideration at this session of the UPR working group).

Finally, there are rumours at the Palais des Nations in Geneva that members of the Western Group (WEOG) are deliberately leaving open a space on the WEOG slate for next year’s Council elections (for the membership term 2020-2022) – in the hope (or perhaps expectation?) that the US will return. While it is true that this last point is based on conjecture (though it is apparently true that there is a space open on the WEOG slate – which is in itself highly unusual), it is equally true that what remains unspoken can often be even more interesting than that which is explicitly declared.

So, what does all this mean? Is the US preparing the ground for a rapprochement with a body that Ambassador Haley only a few months ago called a ‘cesspool’? More likely, US flirting – the dangling of the possibility of a US return, but only if the Council mends its ways is – like in any rocky relationship – a clever means of securing the changes in the Council that the US has wanted all along (but which it was not able to secure from inside the relationship). Indeed, this reading of the situation is supported by other comments of the American delegation to the GA on 2 November. During that debate, the US not only expressed its continued affection for the Council and for its mandate to promote and protect human rights, but also drew the Council President’s attention to the means through which the body could indeed change its ways: namely, the 2021 review. ‘Looking ahead to the 2021 review process,’ asked the US, ‘when will it be appropriate for the General Assembly to initiate discussion in advance of the review, and would the President of the Council support efforts to initiate the process in 2019?’