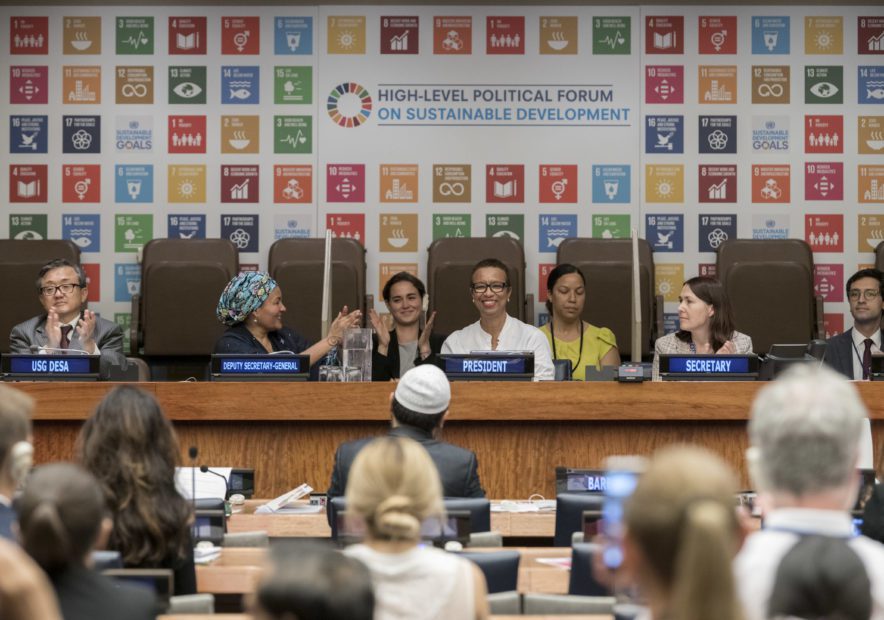 As UN Deputy Secretary-General Amina Mohammed stated during her address to the Council last March, ‘Human rights are an intrinsic part of sustainable development—and sustainable development is a powerful vehicle for the realisation of all human rights.’ The adoption of the 2030 Agenda in 2015 signalled a fundamental shift in the UN’s development paradigm—from one traditionally based on a flawed orthodoxy overemphasising economic growth to a broader understanding of development, which takes into account the element of sustainability based on the human rights principles of equality and non-discrimination.

In his May 2019 report on ‘progress towards the Sustainable Development Goals,’ Secretary-General António Guterres revealed that, while some favourable trends in SDG implementation are evident, progress has been slow on several of the Goals. As a result, vulnerable and marginalised populations are not only being excluded from development gains; they are being actively pushed further behind. Lamenting that the global landscape for SDG implementation has deteriorated, the report concludes that the global response thus far has not been ambitious enough.

As we inch closer towards the 2030 deadline, it has become increasingly evident that a fresh approach to SDG implementation is needed to break the deadlock and accelerate progress while ensuring that no one is left behind. One strategy that has gained traction in recent years is the human rights-based approach. Since the adoption of the 2030 Agenda, much progress has been made in promoting and harnessing the synergies between human rights and the sustainable development agenda. The Council’s Resolution 37/24 reaffirmed these synergies and mandated OHCHR to convene two one-day intersessional meetings for dialogue and cooperation on the subject.

The first of these two intersessional meetings, held in January 2019, focused on the same theme of this year’s high level political forum (HLPF) on sustainable development: ‘empowering people and ensuring inclusiveness and equality.’ The outcome of the meeting fed into HLPF discussions in New York, which concluded last week. The HLPF, more than ever before, emphasised the need for an integrated approach. Below are some of the key messages from the Forum regarding the challenges and opportunities of a human rights-based approach to SDG implementation.

SDG 16 on ‘peace, justice and strong institutions’ is arguably one of the most important enablers for the realisation of the human rights embedded throughout the 2030 Agenda. It is also one of the most underperforming Goals. This has been viewed by some as an indicator of the retreat from international human rights standards on the part of certain governments. Counter to this narrative, HLPF participants affirmed that the human rights framework is not dead. After all, the 2030 Agenda is a human rights agenda—over 90% of the SDG targets are rooted in international human rights instruments, according to the Danish Institute for Human Rights (DIHR).

Given this substantial link, international human rights mechanisms—such as the Universal Periodic Review, the Human Rights Treaty Bodies and Special Procedures—can significantly contribute towards national efforts to implement, monitor, and report on SDG commitments and human rights obligations. As research shows, recommendations from these human rights instruments can often be linked to specific SDG targets, demonstrating a deep engagement with the 2030 Agenda. As such human rights mechanisms can help close the accountability gap for achieving many of the 169 SDG targets. This overlap has also led to practical applications of human rights-based approaches that enhance development policy coherence and efficiency and promote more sustainable outcomes.

National human rights institutions (NHRIs) can play a crucial role in this regard, as they strengthen accountability structures by facilitating national inclusion in SDG implementation and can empower civil society to hold governments accountable to their commitments and obligations. They also form a crucial bridge between international human rights mechanisms and national implementation. However, despite being an indicator under SDG 16, only 70 UN member States have established an NHRI to date. At the current pace, just over half of all States will have a NHRI compliant with the Paris Principles by 2030.

The role of subnational governmental actors in supporting integrated SDG implementation was also highlighted. As the level of government closest to the people, including the most vulnerable and marginalised, local governments are best placed to ensure that the benefits of development policies are evenly and appropriately distributed. Efforts to incorporate the voices of local officials in global discussions is imperative, as is ensuring that recommendations from international human rights bodies are duly relayed to the local level.

Identifying populations that are being left behind requires the collection and analysis of disaggregated data, particularly since conventional statistical models often fail to capture patterns of inequality and discrimination. The 2030 Agenda calls on States to disaggregate data by income, sex, age, race, ethnicity, migration status, disability, geographic location, and other attributes relevant in national contexts. In some States, this need is being met through strategic partnerships between NHRIs and national statistical bodies. Still, many States hesitate to publicise this data for fear of reprimand. But while state-centric approaches to data collection may be unreliable, fortunately, there are several non-state-centric alternatives to fill this gap. For example, the Human Rights Measurement Initiative monitors state performance on the fulfilment of their obligations in regards to 12 fundamental rights through in-country, expert-level surveys. Its data complements the monitoring of progress on SDG implementation.

Human rights advocates have always expressed scepticism about the effectiveness of the 2030 Agenda’s follow up and voluntary review process. HLPF participants recognised the disparity in robustness between States’ human rights and SDG reporting mechanisms. Indeed, while the former undergoes rigorous review by both independent experts and peers, and is based on legally-binding obligations, the latter is voluntary, less systematic, and receives no peer recommendations. A more joined-up reporting process is key to closing this accountability gap. Reiterating deliberations of the intersessional meeting, HLPF participants suggested convening a joint meeting between ECOSOC and the Human Rights Council to explore complementarity between the UPR and the Voluntary National Review processes. It is worth mentioning that numerous States have already begun taking steps to implement, monitor and report on their human rights obligations in tandem with their SDG commitments.

At the global level

In order to fully unleash the potential of the human rights based approach to SDG implementation that leaves no one behind, States must foster cross-thematic collaboration and break down institutional silos at the global level by bridging the New York-Geneva divide. The conclusion of the HLPF’s first cycle represents a useful opportunity to assess how it has contributed to promoting and supporting SDG implementation, and to consider means of strengthening the Forum in years to come. The upcoming SDG Summit in September, which will bring together Heads of State and Government at UNHQ in New York, offers further opportunities to advance the narrative of human rights-development integration.

Bridging the New York-Geneva divide is particularly important in the context of the ongoing UN reforms. The new UN Sustainable Development Cooperation Framework—which has come to replace the UN Development Assistance Framework—places greater emphasis on partnerships and the objective of leaving no one behind. Its integrated programming approach, addressing human rights and other core principles in a holistic manner rather than simply as an add-on module, equips UN country teams and Resident Coordinators to ensure that SDG implementation occurs in an equitable and sustainable manner.

After all, human rights based approaches to SDG implementation ensure that incremental development gains are not subverted by poor governance and discrimination. Furthermore, as argued by UN High Commissioner for Human Rights Michelle Bachelet, ‘You don’t have to be a wealthy country. You don’t need to have attained some mythical level of social, economic or political development. But you do have to set priorities and be bold enough to confront some powerful lobbies’. Notwithstanding the tremendous development gains and accomplishments prompted by the 2030 Agenda, the transformation required to meet the SDGs by 2030 has been insufficient. If states are to accelerate progress, bold action is needed, and a human rights based approach will ensure that the pledge to leave no one behind is fully realized.