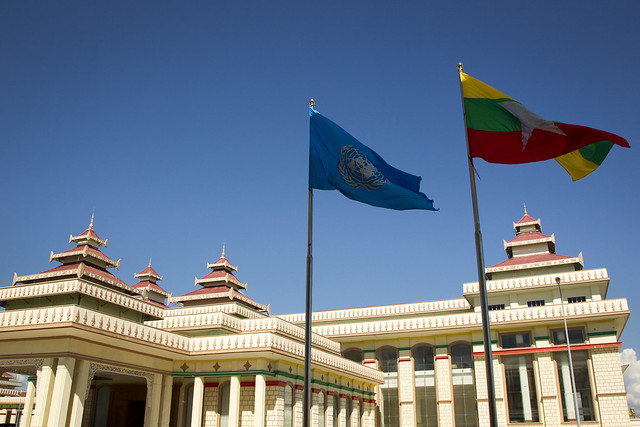 What happened to the UN’s Human Rights up Front initiative?  This is a question many human rights advocates have asked since UN Secretary-General Antonio Guterres took office in 2016.  A recent report on the UN’s failings in Myanmar during the atrocities committed against the Rohingya in 2017 has put this question in stark relief. The independent review, conducted by Gert Rosenthal, a Guatemalan diplomat with expertise on the UN and conflict prevention, concluded that the UN could have done more to avoid or mitigate the horrific events in Myanmar. Rosenthal’s report offers a sobering lesson on how the organisation has continued to falter in its human rights mandate. In light of this latest UN review, this blog will explore the background of Human Rights up Front (HRuF), describe its current status, and explain why it should be urgently re-energised.

The UN in Myanmar

The UN has been sharply criticised for failing to protect the persecuted Rohingya Muslim minority in Myanmar. Despite warning signs for years preceding the atrocity crimes, the UN found itself paralysed to respond to what a UN fact-finding mission labelled a genocide.  In 2017, the Burmese military launched a brutal campaign against the Rohingya population after a group of Rohingya militants reportedly attacked a police post.  The Myanmar army killed thousands of civilians and systematically raped thousands of women and girls.  More than 700,000 Rohingya were forced to flee to neighbouring Bangladesh.  After an outcry from human rights groups calling for UN accountability, UN Secretary-General Antonio Guterres agreed to commission an inquiry into what went wrong and what lessons the organisation can learn for the future.

This may sound like déjà vu.  From Rwanda, to Srebrenica, to Sri Lanka, the UN has been accused of being feckless to protect civilians in the face of atrocities. In 2012, the UN conducted a similar review after the UN’s failings in Sri Lanka in 2009 at the end of the civil war, which was written by former UN official Charles Petrie. More than 40,000 civilians were killed by Sri Lankan Security Forces in an overwhelming and disproportionate use of force against the Tamil Tigers. The Petrie report  detailed the ways in which the UN mission failed to stand up for the human rights of the people they were mandated to assist. The report led to the creation of the Human Rights up Front (HRuF) initiative, which encouraged all UN staff to take a principled stance on human rights.

Former Secretary-General Ban Ki-Moon launched HRuF in 2013 in direct response to the Petrie report.  The initiative had three objectives: 1) to seek cultural change to make sure that UN staff understand their prevention responsibilities and pursue them; 2) to promote operational change to ensure that the UN works on the basis of shared analysis; and 3) to enhance engagement with member States on human rights.

As stated in its rollout by Ban Ki-Moon, the initiative was intended to bring about a cultural shift in the organisation to ensure that all UN staff prioritise human rights protection as part of their duties, regardless of which UN agency they belonged to.  It was meant to overcome a risk-averse culture within the organisation that has prevented UN officials from speaking out on human rights violations.

High hopes were pinned on the HRuF when it was launched, especially among human rights activists.  There is some evidence that it initially had a positive impact in field missions. For example, HRuF has been cited as being instrumental in the decision to shelter civilians on UN bases in South Sudan – a risky decision that ultimately saved thousands of lives. Regional Quarterly Reviews – an information-sharing mechanism created under HRuF, have also improved the capacity of Headquarters to address incipient crises.

Yet even under Ban’s tenure, there was uneven implementation of the initiative.  In 2016, Deputy Secretary-General Jan Eliasson explained to member States that HRuF was designed to be as ‘light and informal as possible.’  Implementation, in fact, was so light and informal that HRuF was never fully embraced by all parts of the UN system, and ultimately seemed to quietly fade away.

What happened to Human Rights up Front?

After Ban’s departure, the question was whether the next Secretary-General would continue to promote HRuF. However, since taking office in 2016, Secretary-General Guterres has not made any visible efforts to make HRuF a political priority. Instead, he has focused on his prevention vision with reforms to the UN’s development and peace and security architecture.

Guterres also took power in the midst of a global retreat from human rights, which could explain why he chose not to prioritise HRuF.  Russia, China, and many developing states have opposed HRuF from its inception, arguing that it could be used a pretext for intervention by more powerful States.  In 2018, China and Russia used their power in the fifth committee to block funding for a post dedicated to overseeing the HRuF initiative in the Secretary-General’s office. The lack of UN staff to oversee the initiative coupled with the lack of public messaging on HRuF, led many to believe that the initiative had been abandoned.

Nevertheless, some UN officials insist that HRuF is not dead, but has been subsumed under the Secretary-General’s larger prevention agenda. While the Secretary-General has been nearly silent on the initiative, they say that it has been quietly operating in the background, albeit in a modified form.  Currently, there are efforts underway to revitalise the initiative in some form, but with a focus preventing and mitigating the effects of a broad array of crises, including violent conflict, environmental disasters, and economic crises.  This de-emphasis on human rights is likely aimed at making the initiative more palatable to member States. Furthermore, without the components of UN public messaging or engagement with member States, the remaining vestige of HRuF has lost its intended raison d’etre.

Lessons learned from Petrie report and similarities in Myanmar

The Rosenthal review inevitably invites comparisons to the Petrie report.  So what lessons have been learned since then? It appears not much.

The Petrie report presented embarrassing and damning details on how the UN mission in Sri Lanka failed to address human rights concerns. The mission was aware that thousands of civilians were being killed, primarily by government shelling, but the Resident Coordinator (RC) refused to publicise civilian casualty figures and downplayed the information collected by the UN’s human rights office to avoid alienating the authorities.  The UN mission also failed to confront the government, even in private, for its war crimes.  Leadership from UN Headquarters was also lacking.  In New York, Ban Ki-Moon’s advisers asked the UN’s human rights office for “dilution of tone and rigor” in its comments on civilian casualties.

In Myanmar, the UN’s failings were strikingly similar to those documented in the Petrie report. Resident Coordinator Renata Lok-Dessallien prioritised development and humanitarian access over human rights even when it became apparent that the Rohingya population was at risk. According to the BBC, she tried to prevent human rights staff from travelling to Rakhine state areas and attempted to shut down public advocacy on the subject so as to avoid alienating the government. UN press releases even avoided using the word Rohingya because the Burmese government refused to use the term and did not recognise them as a distinct group.

The conclusions drawn in the Rosenthal report are more muted than the Petrie report as it seems there was no appetite for deep introspection while the Secretary-General is in the midst of implementing large reforms to the UN. Rosenthal avoids assigning blame to any individuals or UN entities. Instead, he cites structural and systemic factors within the UN system that led to the UN’s “dysfunctional performance.” Most notably, he cites the lack of a common approach on the Rohingya issue, with UN agencies sending mixed messages to Headquarters about the gravity of the situation.

Rosenthal also pointed to the tension amongst UN officials in Myanmar between those who favoured “quiet diplomacy” versus those who pushed for “robust public advocacy” on the plight of the Rohingya.  Ultimately the RC in Myanmar shut down advocacy from the more vocal parts of the UN, such as OHCHR, the Office for the Prevention of Genocide, and Special Procedure experts. Rosenthal makes it clear that this was a mistake, noting that these two approaches – quiet diplomacy and public advocacy – are not mutually exclusive and can complement one another.

Why HRUF is still needed

Secretary-General Guterres’ prevention agenda at the UN focuses on reforms that will hopefully reduce fragmentation and promote better cooperation among the UN’s pillars. But technocratic fixes can only go so far.  A prevention agenda without a focus on human rights, early warning, and early action will ultimately be ineffectual. The UN’s failings in Sri Lanka and Myanmar cannot be blamed on bureaucratic flaws alone.

The real problem in Sri Lanka and Myanmar was that the UN had neglected its core values. Agencies focused on development and humanitarian goals to the exclusion of human rights, even to the point of ignoring or downplaying human rights violations. HRuF attempted to realign the UN’s core values with the Charter – by recommitting the organisation to promoting and encouraging respect for human rights, which is one of the core purposes and principles of the UN, as enshrined in article 1 of the UN Charter.

A coalition of NGOs sent a strong message to the Secretary General, urging him to re-energize the the HRuF initiative prompted by the Petrie report. States also have a part to play in publicly supporting the initiative. It’s important too, that the initative retain its focus on human rights (rather than prevention more broadly) and that it continues to prioritise UN engagement with host governments.

The UN operates in many environments where government authorities are the perpetrators of violence against civilians. Therefore, the UN will need to confront difficult questions on how to take governments to task for human rights violations while simultaneously working with authorities to provide humanitarian and development assistance.  One thing is for sure however, UN staff must not be cowered into silence while bearing witness to atrocities. Ultimately, the UN needs to ask – who does it really serve? Will it be beholden to powerful government interests or will it stand with the victims of human rights violations?  The UN’s performance in Myanmar shows that HRuF is needed now more than ever and should be urgently revitalized.

Jennifer Norris is a lawyer and human rights advocate. She has worked with several NGOs and the United Nations (UN) as a human rights officer in Geneva, the Democratic Republic of Congo, Afghanistan, and Iraq.