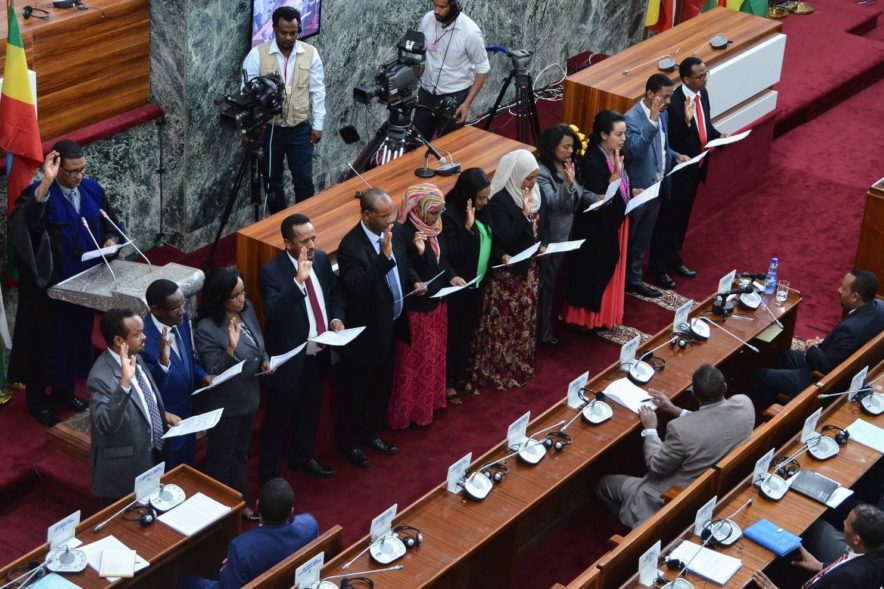 “…Our government’s stand on the rights of women and their equality is not out of favour to them but rather for our common good” Abiy Ahmed, Prime Minister of Ethiopia

There is a growing public sense, promoted by the Western press and NGOs, that human rights are in retreat around the world. It is true that in some countries, including established democracies, there are signs of retrenchment, with leaders pushing the idea that human rights must be suppressed or side-lined in the name of national security, or economic development. However, this gloomy picture ignores States in many parts of the world, especially in the developing world, that have made remarkable progress over recent years. Ethiopia is, I believe, one such country.

Human rights change and reform in Ethiopia has happened so quickly it seems to have caught many people by surprise. While those changes hold out the promise of improvements in the enjoyment of all human rights, and for all parts of the population, women’s rights in particular have received a significant boost. What is more, Ethiopia’s reform agenda is built upon a firm belief that human rights progress will not come at the expense of peace and security, or of sustainable development – rather, it will complement both.

Ethiopia is, of course, a country of rich history and culture; and human rights, tolerance, and the role of women in society have long been strands running through its story.

Ethiopia is the cradle of humankind. One of the earliest human skeletons, nicknamed ‘Lucy’ and dating back around 3.2 million years, was unearthed in the Afar region of Ethiopia. Its written history dates back over three thousand years and is said to begin with a strong female leader – the Queen of Sheba – who amassed great wealth and sat at the centre of a major international trade network.

A commitment to human dignity, rights and tolerance are recurring themes throughout that written history. For example, Ethiopia was a first point of destination for Christianity and early Muslims as they moved – or were pushed – from their original heartlands. A Christian king of Ethiopia is recorded as having welcomed members of the Prophet Mohammed’s family fleeing persecution. A commitment to such universal principles continued to characterize the people of Ethiopia until the 20th and 21st Centuries. It is a little-known fact that Ethiopia sent aid to the United Kingdom following major floods in 1953 (even though Ethiopia’s own resources were strictly limited). In a similar spirit, Ethiopia was an early supporter of UN peacekeeping missions.

With the promulgation of its new Constitution in 1995, Ethiopia became a Federal Democratic Republic made up of nine member regional states[1] and two city administrations, and established a parliamentary form of government.[2] The Ethiopian People’s Revolutionary Democratic Front (EPRDF), a coalition of four ethnic parties, became the ruling party, and has dominated Ethiopian politics every since.

The recent changes in the human rights situation of Ethiopia began in earnest in February last year (2018) when the-then Prime Minister, Hailemariam Desalegn, who had himself succeeded the late Meles Zenawi in 2012, announced his intention to resign (both from his prime ministerial post and as chairperson of the EPRDF), citing his wish to clear the way for reform.

Shortly afterwards the EPRDF elected Abiy Ahmed as the Party’s new chair. In April, following his approval by Parliament, he became Prime Minister. In his acceptance speech, the new Prime Minister set out an ambitious democratic and human rights reform agenda. He placed particular emphasis on the need to strengthen women’s rights, and to enabling women to play a full and equal role in society.

Speaking directly to the women of Ethiopia, Abiy Ahmed acknowledged their key role in building the country and shaping its history, as well as the many sacrifices they had made in this regard. He acknowledged the historic discrimination faced by women in Ethiopia and pledged to build a fairer society in which women might play a fuller role to the benefit of themselves and the ‘common good.’ ‘A nation that neglects and marginalises half of its population […] cannot have a full and complete body and cannot move forward,’ he argued.

Placing his determination to strengthen women’s rights squarely in his own personal experiences, he asked his audience to ‘thank one Ethiopian mother [in particular], someone who, while I was still a seven-year-old boy, knew that I would someday stand before you and who planted this distant yet deep […] vision in me, [and] who raised me.’

It is true of course that many newly elected (male) leaders come to power promising to promote gender equality and women’s rights – promises that are quickly forgotten once they enter Office. However, in Dr Abiy’s case he quickly moved to translate his words into actions.

Firstly, and in the face of considerable opposition from some within his Party, he took the highly symbolic decision to offer half of his twenty Cabinet positions to women. What’s more, women were offered senior Cabinet positions – ministries hitherto considered the domain of men. For example, Muferiat Kamil was appointed to the newly established post of Minister of Peace, and placed in charge of leading and administer the works of Ethiopia’s National Intelligence and Security Service, Federal Police Service, Information Network Security Agency, and Financial Intelligence Center. Women were also chosen to head the Ministry of Defence, Ministry of Trade and Industry, and Ministry of Revenue.

Building on these positive initial steps, shortly afterwards the Ethiopian Parliament appointed the first-ever female Head of State in the country’s modern history (dating back around 88 years): Sahlework Zewde. The last female Head of State had been the Empress Zewditu, who had ruled Ethiopia between 1916 and 1930.

Then, on 1 November 2018, the Prime Minister again surprised national and international commentators by nominating another woman, Meaza Ashenafi, to be Ethiopia’s first-ever female President of the Supreme Court. At the time of nomination, Dr Abiy’s then Chief of Staff, Fitsum Arega, tweeted: ‘Meaza Ashenafi is one of Ethiopia’s most seasoned lawyers and is also a prominent women rights activist. She brings a track record of competence and relevant experience to the role.’

Further appointments quickly followed. Opposition leader and former judge, Birtukan Midekessa, was appointed Head of the National Electoral Board of Ethiopia (NEBE). This was again seen as an important advance for women’s rights.

[1] Article 47 of the Constitution of the Federal Democratic Republic of Ethiopia,1995

Featured Image: Ethiopia’s newly appointed ministers take their oath of office on Tuesday at the parliament in the capital Addis Ababa. (Stringer/AFP/Getty Images)