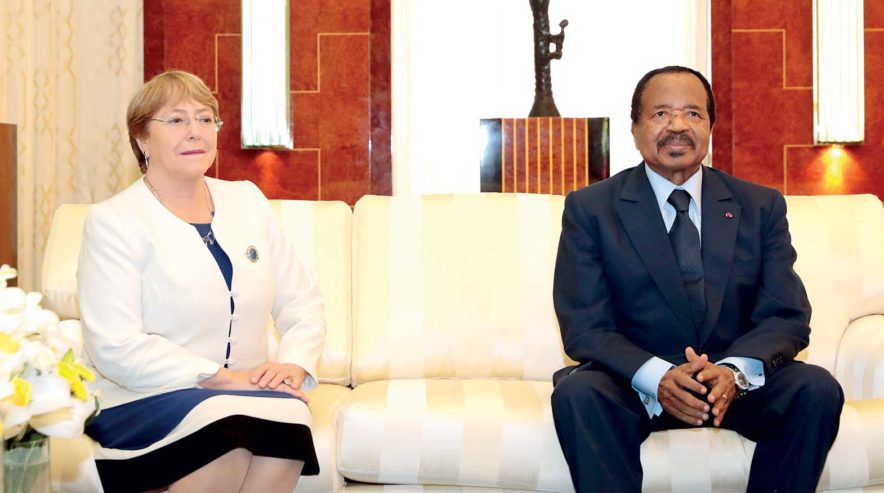 In early May the UN High Commissioner for Human Rights, Michelle Bachelet, undertook an important mission to Cameroon, a country beset by serious human rights challenges especially in the context of unrest and violence in the west and north of the country. That a High Commissioner would undertake an urgent visit to a country facing a situation of serious human rights violations is not, of course, surprising in of itself. What was noteworthy, however, was Bachelet’s approach to the visit and tone of the press statement she issued at its conclusion. Both emphasised the importance of cooperation between the Cameroon Government and the international community, as well as – crucially – the importance of adopting a preventative approach to arresting the emerging crisis. This is in marked contrast to the usual approach to such missions, which, broadly speaking, has tended to emphasise monitoring, reporting and – often – public criticism of the State.

The constructive and cooperative tone of Bachelet’s approach is evident from the very first paragraph of the concluding press statement. In it, the High Commissioner: ‘welcomed the Government’s openness to work with the UN Human Rights Office, and the rest of the UN, to seek effective solutions to the major human rights and humanitarian crises caused by the serious unrest and violence taking place in the west and north of the country.’ She was also careful to acknowledge the extremely difficult and dangerous situation faced by Cameroon, noting that the Government faces major challenges ‘including cross-border incursions by armed groups and criminal organisations along its eastern border with the Central African Republic, [while] in the north of the country, the armed forces are struggling to cope with the depredations and suicide attacks perpetrated by Boko Haram.’ ‘In addition,’ she added, ‘Cameroon is hosting hundreds of thousands of refugees from the Central African Republic and Nigeria.’ The High Commissioner further recognised that ‘the security forces have also been accused of committing serious violations, including extra-judicial killings and torture,’ however, these allegations were not extrapolated in order to condemn the entire Cameroonian State.

She went on to acknowledge that ‘it will not be easy to turn these situations around. It will take significant actions on the part of the Government, and substantial and sustained support from the international community – including us in the UN.’

As well as emphasising the importance of working with the Government to help resolve the crisis, rather than operating in tension with it, the visit and the concluding statement also underlined the importance of adopting a prevention mind-set in order to halt violations and improve security. ‘I believe,’ she said, ‘there is a clear – if possibly short – window of opportunity to arrest the crises.’ She went on to underscore the importance of building trust and strengthening Cameroon’s long-term human rights resilience: ‘There is also a general understanding that the root causes and underlying grievances must also be tackled if long-term stability is to return to a country that had, until just a few years ago, been one of the most settled and peaceful in the region.’

Moreover, in line with many of her speeches since assuming Office last year, Bachelet used her visit to draw the attention of political leaders in Cameroon to the beneficial and mutually reinforcing nature of human rights, sustainable development, and peace and security (i.e. the three pillars of the UN). By doing so, she was forwarding the argument that the promotion and protection of human rights is not only important in itself, but also as an essential contribution to the Sustainable Development Goal’s, and to Cameroon’s long-term peace and security. For example, the High Commissioner reported on her ‘in-depth discussion with President Paul Biya on the human rights challenges facing the country, and initiatives the Government has taken to deal with them, as well as their broader linkages with peace, security and development.’

The High Commissioner’s commitment to working with the Cameroonian authorities to address the long-term root causes of the crisis, and to emphasise building human rights resilience and a culture of respect for human rights, as well as inclusive development, as key tools to prevent a worsening of the emergency, was also evident from the range of meetings she held during the visit. As well as the President and Defence Minister, she also met the Minister of Justice, the Minister of Women, Empowerment and Family, the Minister of Secondary Education, opposition and ruling party politicians, senior leaders of various religious communities, civil society representatives and journalists.

The High Commissioner concluded by offering concrete human rights support and assistance, ‘similar to that being provided to the G5 forces in the Sahel – to help ensure that military operations are in compliance with international human rights standards and violations are prevented, when military forces are engaged in counter-terrorism operations and combat against armed groups.’ ‘As a former Minister of Defence myself,’ she went on, ‘I recognise the difficulties and dilemmas faced by soldiers confronted with extremely violent armed groups moving in and out of civilian areas, committing atrocities as they go […] Nevertheless, every violation committed by Government forces is not only unlawful, but also counter-productive as it plays into the hands of the extremist groups, by feeding local resentment and aiding recruitment. The armed forces must win and keep the trust of local populations, and to do that they must keep scrupulously within the framework of international law and standards.’ In this regard, she said that members of the security forces who commit serious violations must be held accountable.

While noting that her visit was just a first step, Bachelet said she believed the willingness to cooperate shown by the Government during her visit could help clear a path to effective joint action to help Cameroon come through this very difficult period. ‘I, for my part, pledge my Office, including the staff serving in our regional office in Cameroon, will do all we can to help the Government find workable solutions, so that – with additional involvement of other parts of the UN and support from other governments – we can work together to contribute to the restoration of peace and security, protect human rights and clear the space for effective development for people all across Cameroon.’

The High Commissioner’s visit to Cameroon came on the back of a UK-led joint statement at the 40th session of the Human Rights Council that also emphasised technical assistance, cooperation and prevention. In the statement, delivered on behalf of 38 countries, the UK encouraged ‘the Government to accept offers of assistance from regional and international partners to prevent further erosion of the human rights of those living in the north-west and south-west of Cameroon.’ The statement went on to call for ‘an inclusive political dialogue to address the root causes of the crisis,’ including by ‘initiating a meaningful dialogue with the participation of all sectors of society, in particular women, the youth and representatives of religious communities.’