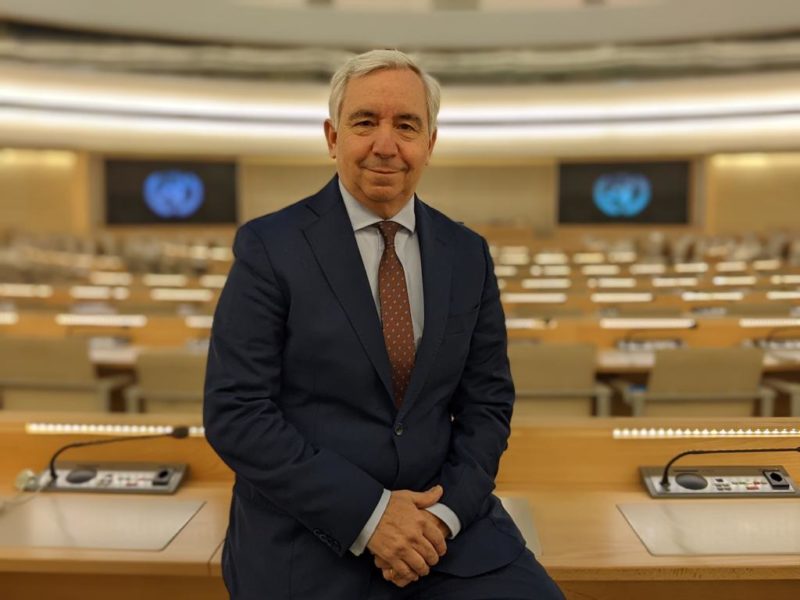 On April 21, 2022, Ambassador Federico Villegas of Argentina, the President of the Human Rights Council, gave a lecture at the New School in downtown New York, on the place of human rights in the UN system. Although he touched on a variety of themes, a key point was that human rights is integral to – and should be better linked with – crisis/conflict prevention, peace and security, and sustainable development. Respect for human rights is, he said, ‘the best way to prevent conflict.’ It is also, he added, ‘the best way of reconstructing the social and institutional fabric of a society that has been through a trauma.’

President Villegas opened his remarks by sharing his view that the human rights project requires a ‘leap of faith.’ The principles and the goals of human rights often seem to be more a matter of belief than materiality, he argued. Human rights, he explained, are something you believe in not because you have empirically observed the efficacy of such an approach, but out of the horror of witnessing the atrocities and discrimination that have transpired over the course of human history.

In spite of this framing, his remarks went on to explain how human rights, when evaluated from a historical perspective, have had had enormous and observable impacts on society, and how, despite having elements of the intangible, they are fundamental to the future of global governance, to peace and security and to sustainable development.

To maximise this contribution of the human rights pillar, he called on the UN to engage in a process of soul-searching and self-analysis (a consistent theme of his Presidency). The siloing of peace and security, development, and human rights in the UN system today, he said, can be traced back to the founding of the organisation in the 1940s – a very ‘different moment’ and a ‘different context.’ In 1945, at the end of the Second World War, ‘peace and security was the big boss,’ he argued, while, in the post-war period, development was also a pressing concern – ‘how to reconstruct countries?’ Human rights, by contrast, ‘came to the UN through the window, not the main door.’

Over more recent times, however, the importance of the human rights pillar has grown markedly. Where this new reality has been resisted, it has led to important UN failures.

He used the Rwandan genocide as an example of the failure to secure peace and security without human rights, and also as an example of how human rights are central to rebuilding social/institutional resilience in post-conflict situations. ‘Rwanda,’ he explained, ‘now [has] an institution to eradicate all types of discrimination and stigmatization. To have that kind of law and institution has a healing effect on society,’ and helps to avoid a repeat – i.e. ‘prevention.’

He then used Europe as the example for why you cannot have development without human rights – ‘the country where the worst atrocities were committed, where the Holocaust was born, [was] the most developed country of that time.’

How human rights can, in the long term, prevent conflict, improve global peace and security, and advance long-term development goals, is a function of another theme of President Villegas’ lecture: the  ‘progressive development’ of human rights norms and standards. Progressive development defines, for President Villegas, both the methods of work of the Human Rights Council and the overarching purpose of both the Council and multilateralism generally. He provided examples, like witnessing the introduction of the phrase ‘sexual orientation’ into multilateral discourse during negotiations over an extrajudicial killings report in the Commission of Human Rights. Today, there is a Special Rapporteur on sexual orientation and gender identity.

‘Progressive development’ also seemed to underpin an overarching optimism in President Villegas’ world view. For example, he said that the Human Rights Council contributes to a global, top-down process of progressive social development, that will gradually and incrementally create a ‘new social contract.’ This optimism is, he said, grounded in Argentina’s recent past. Human rights were the central pillar of his country’s democratic transition. The remarkable contrast between Argentina now and Argentina during the dictatorship is, he argued, is a powerful argument in favour of a human rights approach to progress and governance. Through human rights, ‘we were able to make a bridge ‘between our dark history and our future.’

Polarisation at the Council

An interesting final note, President Villegas spoke of the growing political divide at the Council (and the UN more broadly) – especially between the global North and South, and between the US and China. He traced the roots of the current ideological divide to the end of the Cold War and the collapse of the Commission on Human Rights – a time when ‘violations of human rights were committed massively on both sides.’ However, he said, the countries that were the biggest offenders were ‘protected [from international scrutiny and condemnation] by geopolitics.’

After the fall of the Soviet Union, people believed that one side had won over the other ‘because they were better in organising themselves politically, socially, and economically. And the other side was believed to be so bad that it failed in everything. That fundamentalism [has] destroyed the planet, and levels of inequality became obscene.’ Post-Cold War liberalism, the concept of a minimalist State, individualism, and laissez-faire economics have come at the expense of human rights.’

By contrast, President Villegas expressed his hope that we are now reaching a period of synthesis between right and left, north and south. In that regard, he mentioned a China-led initiative to develop a new conception of human rights centring on collective rights.

To further mend fences between the sides, Villegas committed to trying to ‘foster experience-sharing at the Council – a different way of approaching human rights.’