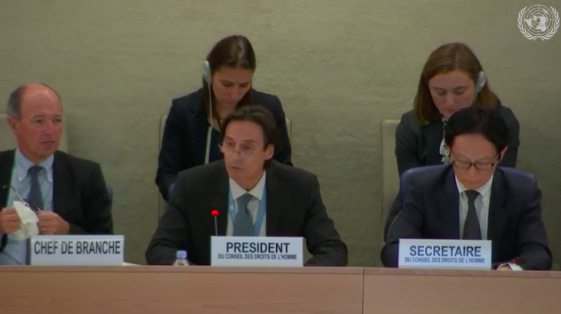 On Monday 3 December, H.E Mr Vojislav Šuc presided over his last meeting as the twelfth President of the UN Human Rights Council. The purpose of the meeting was twofold. Firstly, to formally elect the next President of the Council and his Bureau. In this regard, the Council elected Senegal’s Permanent Representative, H.E. Mr Coly Seck, as its thirteenth President. The Ambassadors of Iceland and Croatia were also appointed as Vice-Presidents.[1] Secondly – and crucially – the meeting was expected to bring to an end a one-year process of negotiations to strengthen the efficiency of the Council. Unfortunately, despite an inclusive and transparent process of consultations, led by 3 groups of co-facilitators and ultimately by the President himself, in the end a small group of States, led by South Africa, significantly watered down the final deal. This will have negative repercussions for the Council’s working methods and output. Notwithstanding, the final agreed ‘Presidential Statement’ (PRST) does introduce a number of important innovations.

The current push for greater efficiency was begun, in earnest, by the ninth President of the Council, H.E. Joachim Rücker (2015). His aim was to bring the rapid expansion in the body’s repetitive work, output and expenditure under control, to free up more time for genuine dialogue and cooperation, and to allow States to focus more on national implementation and impact (i.e. effectiveness). The process begun by Ambassador Šuc in February this year was designed to build on the success of his predecessor’s efforts (which have begun to bear fruit), and to reach a consensus agreement on a final (for now) package of changes covering: the Council’s programme of work; rationalisation of initiatives and mandates; and the use of technology.

A key impetus behind Ambassador Šuc’s approach, which aimed to find ways of working better within existing resources, was the Council’s failure to agree a draft Presidential Statement in 2017; after China, Cuba, Russia, Saudi Arabia and others successfully argued that the way to deal with increased pressures on the Council should be to reform its methods and programme of work, rather than to increase funding levels. These same countries also called for any such reforms to be introduced through an open and inclusive process of informal consultations. It is therefore disappointing and highly regrettable that, one year later, the same States (plus South Africa), rejected workable and sensible proposals that responded to their stated position in 2017, and that were developed through exactly the kind of open process they had demanded.

This is especially the case when one considers that the draft PRST finally tabled this week was already significantly watered down – in an effort on the part of the Bureau to achieve consensus. For example, the scope and ambition of proposals to reform the Council’s programme of work to bring it into line with the original vision of States in 2006 (i.e. that it is not necessary to address every agenda item at every regular session of the Council) were first reduced to focus only on general debates, and then reduced further to focus only on a limited merger of certain general debates. Notwithstanding, the draft PRST presented at the end of November, still included a number of important changes, including inter alia:

Unfortunately, the final PRST adopted on 3 December saw many of these elements taken out, most notably those focused on creating time and space on the Council’s agenda (for meaningful dialogue, cooperation, and a greater focus on implementation and capacity-building) by moving UPR adoptions out of regular Council sessions, and by clustering/staggering some general debates.

It is difficult to objectively understand why South Africa and others chose to oppose these changes – changes that would mainly have benefited small developing country delegations by reducing time and work pressures, freeing up space to discuss important issues such as the delivery of capacity-building support, and reducing duplication and waste.

There are two possible explanations: either that they would like Council delegations, including small delegations, to continue to spend their time and resources engaged in repetitive debates, reading reports, and listening to panels; or that they simply decided to politicise the process.

That the second possibility may be close to the mark is suggested by negotiations over the adoption of national UPR reports. Initially, the position of China, South Africa and others was that the proposed changes should only come into force at the end of the (current) third cycle. However, when the Bureau accepted this sensible proposal, LMG States ‘moved the goalposts’ and demanded that the idea of moving UPR adoptions be deleted altogether. (In the end, the PRST merely commits members to discuss possible changes at a later date). Likewise, with almost every other substantive reform proposal, South Africa and the LMG demanded that the text should be changed to merely read: ‘The Council decides to continue discussing….’

Other States, including Japan, Mexico and UK, rightly called out the lack of ambition and cooperation exhibited during the negotiation process.

Notwithstanding these disappointments, the final document does still contain a number of positive steps, including:

[1] The Latin American Group and Asia-Pacific Group are yet to nominate their Vice-Presidents.