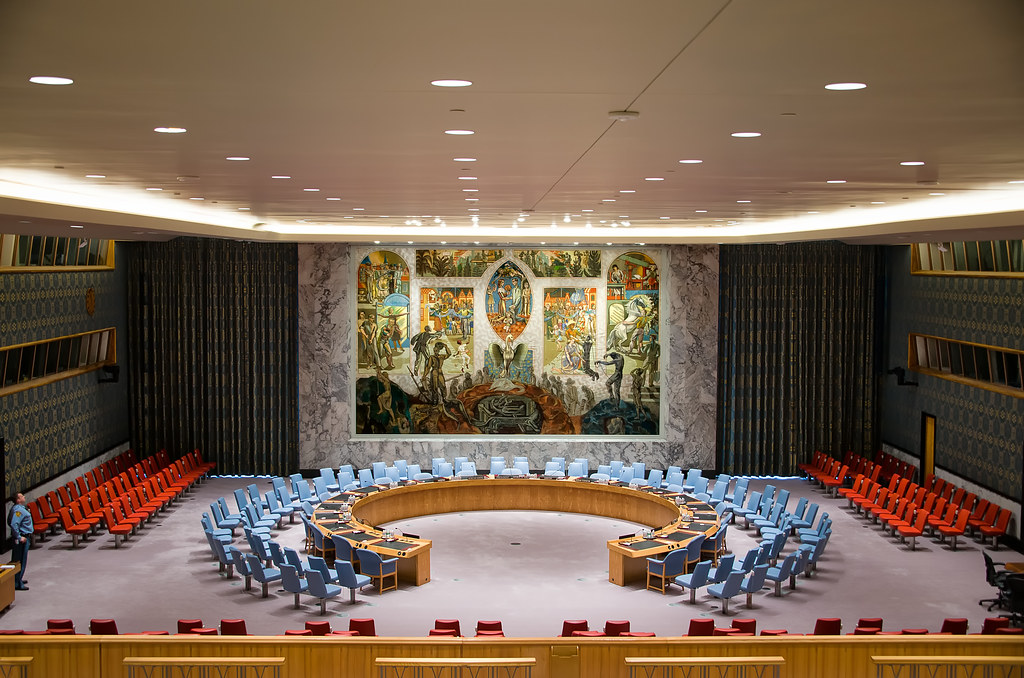 On 13 December 2021, the UN Security Council (UNSC) once again missed the opportunity to assert its leadership in the field of climate security and anchor its ability to more effectively and comprehensively address the global threat posed by climate change. After months of tense negotiations, a draft resolution (first circulated on 23 September by Ireland and Niger), which would have defined climate change as a threat to international peace and security for the first time ever, was put to a vote and defeated. The text, which was based on a previous draft proposed by Germany in 2020 (ultimately closeted due to opposition), would have significantly strengthened the Security Council’s (and the broader UN’s) ability to fully direct its attention and powers towards addressing and preventing climate-related conflict, in a time where climate change is widely acknowledged to be a root cause or at least a risk multiplier of various ongoing conflicts. While the resolution had significant support from 113 UN member States, Russia’s ‘no’ vote served as a veto; India also voted no, while China abstained.

The resolution would have required the Council ‘to take into consideration comprehensive conflict analysis and conflict management strategies incorporating information on the security implications of climate change,’ and to consider climate change as a root cause and/or risk multiplier of conflict. It additionally requested that the Secretary General ‘integrate climate-related security risk as a central component’ of the United Nations’ conflict prevention strategies and report on ‘the security implications of the adverse effects of climate change in relevant country or region-specific contexts on the Council’s agenda and provide recommendations on how climate-related security risks can be addressed’, while encouraging UN peacekeeping operations and special political missions to ensure dedicated capacity to address climate security. These steps would have allowed the UNSC to truly analyse and understand the security threat climate change poses and thus better fulfil its responsibility to maintain international peace and security, prevent climate-related conflict and protect human rights.

Regrettably, despite Ireland’s assurances that these were merely ‘modest first steps’ to enhance the Council’s ability to respond to climate-related security risks, detractors expressed concern about the ‘securitisation’ of the issue and expressed fears that coercive measures might be pursued in response to challenges posed by climate change. In letters voicing their very similar concerns, Russia, China and India argued that the scientific evidence linking climate change to security concerns is not clear and that climate issues are better addressed under the United Nations Framework Convention on Climate Change, which allows input from all member States.

Russia further stated that defining climate change as a threat to international peace and security would divert attention away from ‘genuine, deep-rooted causes of conflict,’ and that the instability of specific countries and regions was due to a range of reasons not addressed by the resolution. In an apparent attempt at consensus-building (or perhaps rather to detract from the matter at hand and solidify their position), Russia appears to have agreed to references to climate change in a draft presidential statement on the Sahel region, which Council members were unwilling to consider as an alternative.

While the traditional interpretation revolved around armed conflict, the definition has evolved over time, and in 2014 the Security Council determined (somewhat controversially) that the Ebola crisis constituted a threat to international peace and security in UNSC resolution 2177.

The Security Council first discussed climate change as a threat to peace and security during a 2007 open debate, where Member States argued that it can ‘exacerbate some of the core drivers of conflict’. In 2011, the Council expressed concern that climate change’s possible adverse effects, ‘may, in the long run, aggravate certain existing threats to international peace and security.’

Meanwhile, those adverse effects are already being felt, posing numerous challenges to countries’ resilience. In Africa’s Lake Chad region, desertification and climate change has contributed to the loss of traditional livelihoods, allowing extremist groups such as Boko Haram to enter the picture and provide the region’s residents with other sources of subsistence, leading the UNSC in 2017 to recognise that the ‘adverse effects of climate change and ecological changes’ contributed to the region’s instability. In Somalia those displaced by climate events within the country have clashed with locals and been susceptible to recruitment by armed groups. In Sudan, the government has been undermined due to an inadequate response to climate events. Eight of the 15 countries most vulnerable to climate change are hosting UN peacekeeping or special political missions.

It is therefore quite clear that the effects of climate change have directly contributed to insecurity and instability. These cases demonstrate that climate change can be a significant driver of conflict in any country or region where populations are dependent on natural resources for livelihoods; it can reduce peoples’ ability to earn a living, increase competition for dwindling resources, cause mass displacement, and facilitate extremist groups’ recruitment and implantation.

There is thus a strong basis for the Security Council to consider climate change as a threat to international peace and security and fulfil its responsibility to coordinate a coherent  response across the UN system. However, due to strong opposition from a minority of Council members, including key permanent members, it does not appear that climate change will be considered a threat to international peace and security by the Council in the near future.

What options to address climate change threats in the UN system?

The UN Human Rights Council (HRC), which has not only recognised the right to a clean, healthy and sustainable environment as a human right, but has noted that climate change directly and indirectly affects human rights, presents itself as a strong alternative. Indeed, the HRC and its mechanisms are well placed to address climate change’s implications for peace and security by working to prevent its negative impacts on human rights. HRC resolution 45/31 equips the Council to fill the void created by UNSC inaction by requesting the High Commissioner to bring early warning signs of heightened risk of human rights emergencies to the attention of the HRC in regular sessions, special sessions or through informal briefings. It further requests the Secretary-General to regularly bring prevention-related reports to the attention of relevant bodies of the UN, helping mainstream climate security consideration throughout the system.  Moreover, the Council’s thematic and country-specific Special Procedures are ideally placed to identify early warning signs of climate-driven instability and conflict, while helping States build climate resilience. Similarly, the Universal Periodic Review provides an important platform to formulate recommendations to improve national capacity to mitigate climate-related peace and security risks.

The General Assembly is also uniquely placed to step up in the face of UNSC inaction. Under the ‘Uniting for Peace’ resolution, the General Assembly (GA) has powers to address threats of international peace and security if the UNSC fails to exercise its primary responsibility due to lack of unanimity of permanent members. The GA could work to stop and prevent such threats to peace and security by dispatching investigative mechanisms or preventative diplomacy missions, recommending measures to member States, providing humanitarian assistance, analysing climate security factors to prevent future conflict or by assisting national governments to identify and implement climate risk mitigation strategies.

Therefore, while it is unfortunate that the Security Council vetoed a resolution that would have enabled it to better manage and prevent climate-related threats to international peace and security, there is still hope that the wider UN can fill the void. Though an approach premised on UNSC leadership would clearly be the best and most institutionally coherent option to address climate security, UN organs such as the Human Rights Council and General Assembly can – and must – step up in the face of UNSC paralysis. Of course, while work to convince the Security Council to recognise climate change as a threat to international peace and security must continue, in the meantime, the wider UN cannot shirk its responsibility to ensure effective action to prevent climate-driven conflict and its negative impacts on the enjoyment of human rights.