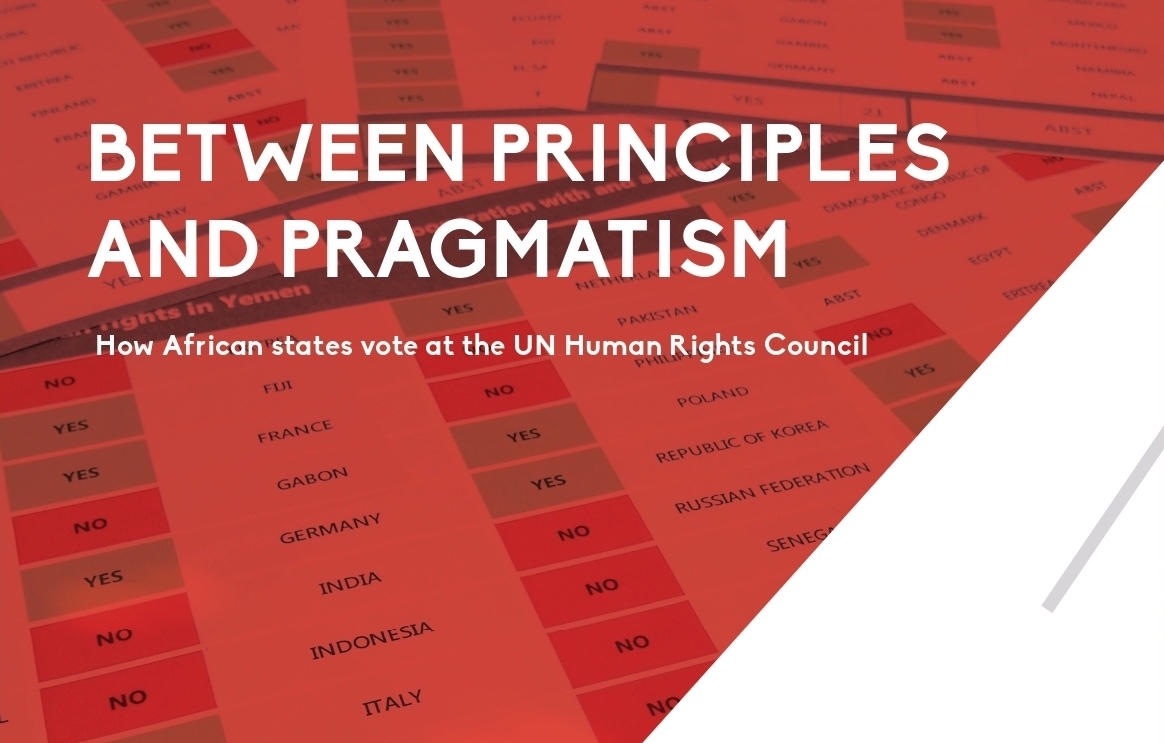 What would a comprehensive analysis of the voting record of African states at the UN Human Rights Council look like?

The question isn’t easy, but we hope that the answer DefendDefenders and AfricanDefenders formulated will quench the thirst of those—diplomats, human rights advocates, or mere Council observers—who pay attention to the African Group… or worry about its voting patterns.

With the report we just released, “Between Principles and Pragmatism” we filled that gap. We analysed, among others, how African states vote on resolutions and amendments; what initiatives they support and oppose the most; whether the behaviour of African states differs from that of other states; and whether there have been evolutions over time.

The report covers a total of 471 resolutions on which a vote took place since the Council’s creation, in 2006: namely, all 223 country resolutions and all 248 thematic resolutions that were put to a vote from HRC1 to HRC50. Furthermore, the report covers key amendments on which a vote took place. For each vote, we show how the 47 states that were members of the Council at the time of the vote voted, as well as the result of the vote for the African Group (13 states).[1]

The report relies on quantitative (statistical analysis and calculations) and qualitative methods to analyse voting behaviour and patterns.

We aren’t going to spoil the report (please read it!) here, but let’s flag a number of key findings:

Regarding country-specific resolutions, African states often find refuge in abstention. They are increasingly reluctant to vote “Yes” and, in recent sessions, a larger number of African states have voted “No.” Country resolutions are seen as more divisive and give rise to accusations of “politicisation,” “double standards,” “interference in domestic affairs,” and undue singling out of countries. In this context, African states often prefer not to pick a side.

The report concludes that while in theory, the African Group can exert a great deal of influence on Council outcomes, in practice, its influence is only clear regarding thematic resolutions. Regarding country resolutions, it remains limited. Recent sessions may indicate a shift; unfortunately, this shift might not be for the better. In this regard, the 2021 “Yemen disaster” (which is attributable, to a large extent, to African states) came as a shock.

The future will tell whether collectively, the African Group can increase its influence over Council outcomes and whether outliers (positive or negative) emerge.

[1] Its annexes can be used as a database of votes at the Council from its first to its fiftieth sessions (HRC1 to HRC50). Full versions of the Excel spreadsheets are available for download on the report’s page, on DefendDefenders’ website: https://defenddefenders.org/between-principles-and-pragmatism/