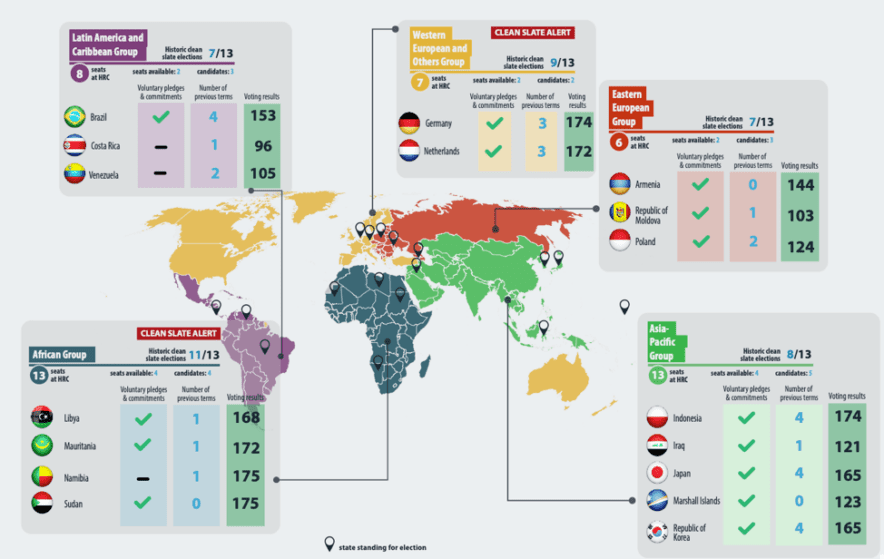 Yesterday’s elections to the Human Rights Council for the three-year membership term (2020-2022) brought some good news, but also served to demonstrate – again – the complacency and short-termism that characterises most States’ approach to these important polls.

Overall, the elections strengthened the composition of the Human Rights Council. In the Asia-Pacific Group (APG), for example, Indonesia, Japan, Korea and the Marshall Islands all had strong candidatures and, broadly speaking, can be expected to take principled positions on both thematic and country-specific Council initiatives (though Indonesia usually abstains on country-specific texts). For its part, Marshall Islands will take a seat at the Council for the first time – a positive sign for the body’s inclusivity and diversity. It joins a growing number of Small Island Developing States (SIDS) poised to take-up the responsibilities of membership (Bahamas and Fiji are current members, and Maldives and Mauritius have held a seat in the past). Taken as a whole (i.e. considering the incoming members, outgoing members, and sitting members), and notwithstanding the fact that it is losing some important members (e.g. Iceland, Rwanda and Tunisia), the 2020 Council looks a strong one.

Second, in 2020 the Council will welcome three new members (i.e. States that have never held a seat before), namely Armenia, Marshall Islands, and Sudan. This further boosts the inclusivity and diversity of the body – an important determinant of its legitimacy and credibility. With the election of these countries, 48% of APG States, 63% of African States, 83% of Eastern European States, 52% of Latin American and Caribbean States (GRULAC), and 62% of WEOG States have had the opportunity to serve on the UN’s primary human rights body. Notwithstanding this progress, there will be fewer new members joining the Council in 2020 (three) than did so in 2019 (six).

Third, in the end only two of the five UN regional groups put forward ‘clean slates’ for the 2019 elections. Those two groups – the African Group and the Western European and Others Group (WEOG) have, historically-speaking, the worst records in terms of avoiding competition in elections (the African Group has run cleans slates 11 times out of 13, and WEOG 9 times).

So, overall and certainly when seen in a historical context, the 2019 elections were rather positive for the Council’s authority, credibility and – one might expect – for its effectiveness. However, as always with Council elections, these positive aspects will be overshadowed, especially in the eyes of the world’s media, by the election of countries such as Venezuela and Libya that do not come close to meeting the criteria for election or membership set down by the General Assembly in resolution 60/251. For its part, Libya did not present ‘voluntary pledges and commitments’ in support of its candidature until very late in the day, has a poor record of cooperation with the UN human rights mechanisms, and rather than ‘upholding the highest standards in the promotion and protection of human rights’ (as is expected of new members under GA resolution 60/251) is currently embroiled in a civil war. Turning to Venezuela, the Maduro Government has an even worse record of cooperation with the UN human rights system (especially with Special Procedures and treaty bodies), has failed to respond to credible allegations of reprisals against human rights defenders, and is actually on the agenda of the Human Rights Council under item 4– accused of committing serious human rights violations against the people of Venezuela.

The election of Venezuela (105 UN member States out of 193 apparently believe the country does meet the standards of election and membership set down in resolution 60/251) in particular, is undoubtedly a serious blow (again) to the image, credibility and authority of the Council. As expected, the morning after the polls, it is this news that is dominating media coverage of the 2019 elections – with the positive aspects mentioned above completely ignored. So why does this keep happening (last year, for example, the ire of journalists and WEOG Ministers was directed at the election of the Philippines and Eritrea)? Why do States at the GA keep on electing such countries to the Council?

The short answer is: complacency and short-termism. It had been clear for well over six months (ever since Paraguay pulled out of the race) that Brazil and Venezuela were running on a GRULAC clean slate, and therefore would very likely be elected. Yet very few States at the UN in Geneva or in New York seemed to care (or, perhaps more fairly, to have the time to think about it). In the end, of course, Costa Rica bravely stepped forward to break the clean slate and challenge Venezuela. However, this decision was only taken a couple of weeks before the election. In the end, considering the important role played by ‘reciprocal arrangements’ (i.e. vote swapping) in UN elections, this gave Costa Rica too much to do, and too much ground to make up, in too short a timeframe. Even then (as did Bahamas when it mounted a late challenge to Venezuela in 2015), Costa Rica came very close – within nine votes of beating Venezuela. Clearly, if Costa Rica had started earlier – even three months earlier – it would have won.

Perhaps then the only positive thing to come from the election of Venezuela to a new three-year term will be to jolt the world’s democratic States out of their complacency and short-termism, which tends to characterise their approach to Council elections (at least, until the votes come in), and instead make a concerted, long-term effort to encourage more States (especially Small States) with good human rights records to engage more closely with the Council, and eventually consider running for membership. Such ‘supply side’ improvements would undoubtedly have a positive impact on the election process – strengthening competition and choice, and complementing initiatives aimed at promoting transparency and public accountability such as the Amnesty-ISHR candidate hearings, and the Norway-URG yourHRC.org election guide.

States should also give renewed thought to convening annual State-to-State dialogues with all candidates under the auspices of the President of the GA in New York. Such dialogues between voting States and candidates (similar to the 2016 dialogues between States and the UN Secretary-General candidates), especially if combined with the above-mentioned ‘supply side’ reforms and a ‘voting States pledge’ (committing signatories to cast their votes based on human rights rather than diplomatic considerations), could have a significant positive impact on elections and on the Council itself.