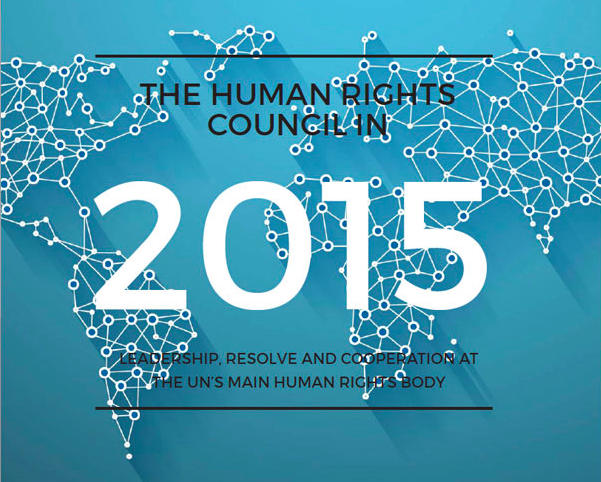 The ninth year of the Human Rights Council’s existence will be remembered for many things, some positive (e.g. its work to support human rights in Sri Lanka; the creation of a new Special Procedures mandate on the right to privacy), others negative (e.g. its response to the situations in Iraq, Sudan and Yemen; its consideration of a Joint Inspection Unit report that risks undermining the independence of the High Commissioner for Human Rights; and the furore over Saudi Arabia’s chairmanship of the Council’s Consultative Group).

Looking back, policymakers might also reflect on an increasingly polarised atmosphere in Room XX. As one measure of this, the number of voted resolutions in 2015 (38% of March texts, 27% of June texts, and 34% of September texts) was significantly higher than previous years. As in previous years, there were particularly fraught negotiations on resolutions dealing with subjects perceived by some to touch upon matters of religion, including resolutions on ‘domestic violence,’ ‘protection of the family,’ and ‘freedom of artistic expression.’

However, in years to come, it is likely that people will recall a few developments in particular including efficiency drives, efforts to finally tackle the international ‘implementation gap,’ and, towards the end of the year, a re-emergent recognition of the importance of prevention in the UN’s human rights toolkit. 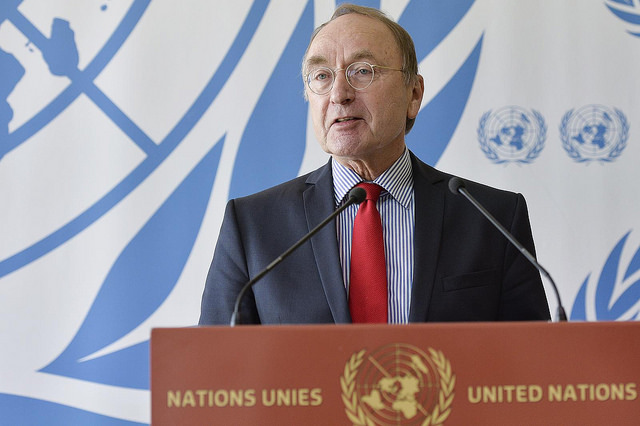 Over the course of the year, the President and the Bureau probably devoted the most attention to the first of these three ‘baskets’ – efficiency – and with impressive results: 2015 witnessed the first sustained quantitative contraction in the output of the Council since the body’s establishment in 2006. For example, the number of resolutions adopted at the 28th session in March (37) was 12% lower than during the corresponding session one year earlier. The 29th session (26 texts adopted) and 30th session likewise saw drops of 24% and 11% respectively (on the previous year). Overall, 2015 saw 95 resolutions adopted in regular session, 15% less than the number adopted in 2014 (112). The number of Panel Debates likewise dropped from 22 in 2014 to 18 in 2015 (a decrease of 22%).

Some of the benefits of this rationalisation will take time to be fully felt. For example, as in previous years, the Council was presented with record numbers of OHCHR reports (213) in 2015 – reports requested by 2014 resolutions (for comparison, in 2014 205 reports were presented). Notwithstanding, other benefits were already evident: including more time to reflect on improved working methods, more space to innovate, and more opportunities to consider how to strengthen on-the-ground effectiveness and impact.

As part of this efficiency drive, which in turn built on and complemented related efforts, such as the annual Norway-Turkey led cross-regional statement on methods of work, 2015 will likely be remembered as one of the most innovative years in the Council’s short history. 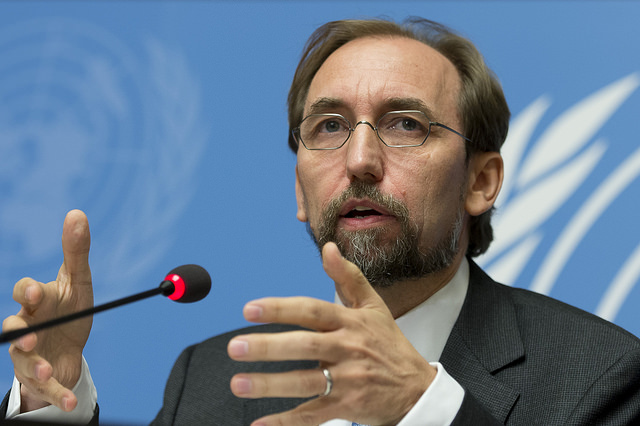 Taking forward ideas incubated during informal retreats and dialogues in Berlin, Geneva, Glion and elsewhere, a range of actors introduced new and improved ways of realising the Council’s mandate, including, inter alia: Informal Council Briefings by the High Commissioner (for example, on 26th May, the High Commissioner briefed the Council on Burundi, South Sudan, and the rights of migrants); Enhanced Interactive Dialogues (the 29th session saw an ‘EID’ on the human rights dimension of the migrant crisis in the Mediterranean); country-specific Panel Debates (on the situation in North Korea); and ‘hybrid’ resolutions (the Organisation of Islamic Cooperation’s (OIC’s) resolution on the rights of Rohingya and other minorities in Myanmar).

2015 also saw the first adoption, outside of a formal Council review, of a text dealing with institutional reform. At the end of the 29th session, Ambassador Ruecker delivered a Statement by the President (PRST) on ‘enhancing the efficiency of the Human Rights Council.’ The PRST seeks to bring improvements to the voluntary yearly calendar for thematic resolutions (to promote transparency and efficiency); introduce improved modalities for the appointment of Special Procedures mandates over time; and support the development of a ‘more distinguishable, accessible and user-friendly webpage for the Human Rights Council, its mechanisms and procedures, including a user-friendly extranet, with features such as technical alert functions.’

Towards greater effectiveness and impact?

A key goal of these rationalisation and efficiency efforts, and of associated innovations in the Council’s working methods, was to create space for States and NGOs to focus on new and emerging human rights challenges (in 2015 there were new initiatives and mechanisms on issues including ‘combatting violent extremism’ and ‘privacy in the digital age’), and to enable the Council to move to fill the long-standing ‘implementation gap’ – the difference between international norms and local reality. 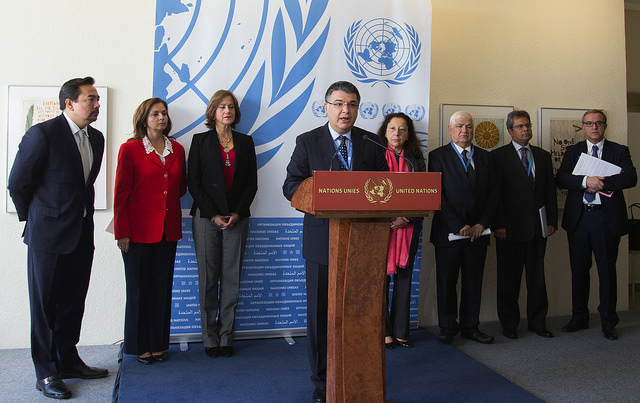 On the latter point, when the Council was established in 2006, the then Secretary-General Kofi Annan called upon the new body to lead the international community from ‘the era of declaration’ to the ‘era of implementation.’ 2015 may come to be remembered as the year in which Member States heeded his call. Three developments in particular support this view.

First, during the 28th session in March, the Special Procedures submitted, for the first time, a detailed annual report to the Council, providing a comprehensive picture of what they did in 2014 individually and as a system; and also, importantly, providing information on levels of state cooperation with the mechanism. What is more, the Chairperson of the Special Procedures Coordination Committee – so the representative of the mechanism – was given the opportunity to personally present the report to the Council, and engage in a discussion with States on the implementation of Special Procedures recommendations.

Third, and linked with the Brazil-Paraguay initiative and with President Ruecker’s ‘effectiveness basket’ of proposed reforms, in late 2015 Members of the Council began to reflect on the third cycle of the UPR. Central to discussions to-date have been the extent and nature of necessary changes that should be made to strengthen follow-up on domestic implementation and the objective measurement thereof. 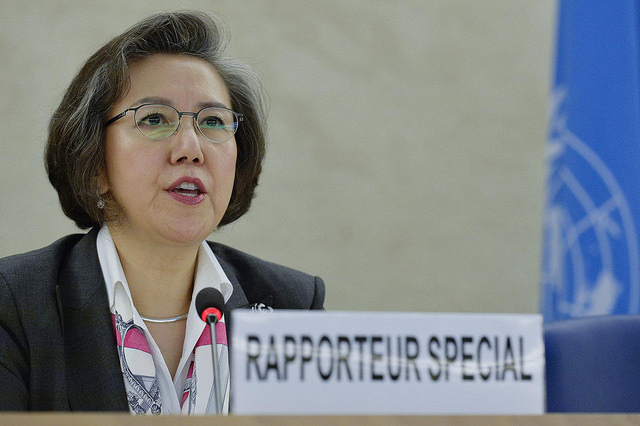 It is as well that the international community appears, at last, resolved to tackle the issue of implementation and compliance: because where that gap grows too wide, instability and gross human rights violations tend to follow.

During 2015, the High Commissioner for Human Rights, Zeid Ra’ad Al Hussein, repeatedly made this point. During the presentation of his regular report to the 28th session in March, he reminded States that ‘by ratifying the UN Charter, [you] have made a clear commitment to […] reaffirm faith in fundamental human rights […] and to establish conditions under which justice and respect for the obligations arising from treaties, and other sources of international law, can be maintained […] And yet, with alarming regularity, human rights are disregarded, and violated, sometimes to a shocking degree.’ He returned to this theme during the 30th session, expressing anger at the inability of the international community to act in the face of mounting human rights violations around the world. This, he argued, represented a ‘grim indictment’ of the record of the UN and its Member States.

The problems alluded to by the High Commissioner can be seen at two levels. First, the inability of Member States to fulfil a core mandate of the Council as expressed in operative paragraph 3 of GA resolution 60/251: ‘to address situations of violations of human rights, including gross and systematic violations.’ And, second, where the Council does address specific situations, its interventions tend to be reactive in nature.

As this end-of-year report shows, 2015 again saw too few States (beyond the ‘usual suspects’ – EU, US, Japan) possessing the political will to bring situations to the Council’s attention (although the OIC’s first non-item 7 country-specific resolution – on minorities in Myanmar, was a notable development). The Council did, to varying degrees, address situations of violations in Eritrea, Iran, North Korea, Syria, and Burundi, including, in the latter case, through a Special Session. It also scored some notable achievements, such as playing a key role in promoting an improved human rights situation in Sri Lanka (and, in 2015, passing a resolution with the support of the country concerned). However, despite some signs of change (e.g. at the 29th session, the proportion of country-focused resolutions rose to 32% of the total), it is nevertheless clear that, overall, the Council’s actions have been both insufficient and highly selective. What is more, in many cases over the course of 2015, the nature of the Council’s interventions were clearly inappropriate, and unlikely to achieve anything more than a discrediting of the UN’s human rights pillar. For example, the manner of the Council’s response to the serious violations in Iraq, Sudan and Yemen represented a serious blow to the institution’s credibility.

This last point raises the wider question of how the Council can and should respond to different types of situation. This question is often distilled into a distinction between item 4 interventions (drawing attention to and condemning violations) and item 10 interventions (providing capacity-building and technical assistance to the State concerned), although 2015 saw further moves towards using item 2 for situations (e.g. Sri Lanka, Sudan) that, in the view of the sponsors, don’t fit easily under either 4 or 10.

However, especially towards the end of 2015, the Council saw a renewed focus on prevention as an alternative way to construct, and perceive of, international responses to urgent situations. The renewed emergence of this prevention agenda, which also covers related initiatives such as Human Rights Up Front (HRUF) and the Responsibility to Protect (R2P), is partly an acknowledgement that the Council struggles to have impact in conflict situations where rights violations have already become pervasive. For example, despite 13 resolutions on the situation in Syria, the Council has failed to achieve much beyond the collation of evidence. And it partly reflects an acknowledgement that where the Council could play a more effective role, i.e. by preventing gross and systematic violations, it does not currently possess the tools to do so. December’s Special Session on Burundi highlighted the perceived inadequacy of the Council’s ‘item 10’ approach to serious violations, while opposition to such a Special Session on the part of Burundi and others in the African Group show that such sessions (together with mechanisms such as Commissions of Inquiry) are perceived, rightly or wrongly, as part of the Council’s traditional ‘item 4’ toolkit.

In a possible nod to such perceptions, the US, which led on the convening of the December Special Session, labelled it as an effort to prevent a further deterioration of the human rights situation in Burundi.

If States are serious about moving towards a prevention paradigm, they will need to engage in a meaningful debate about what the concept of prevention means in practice and what new tools and mechanisms are needed to do the job. In 2015 States merely scratched the surface of such questions. 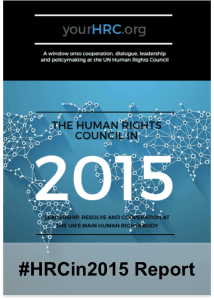