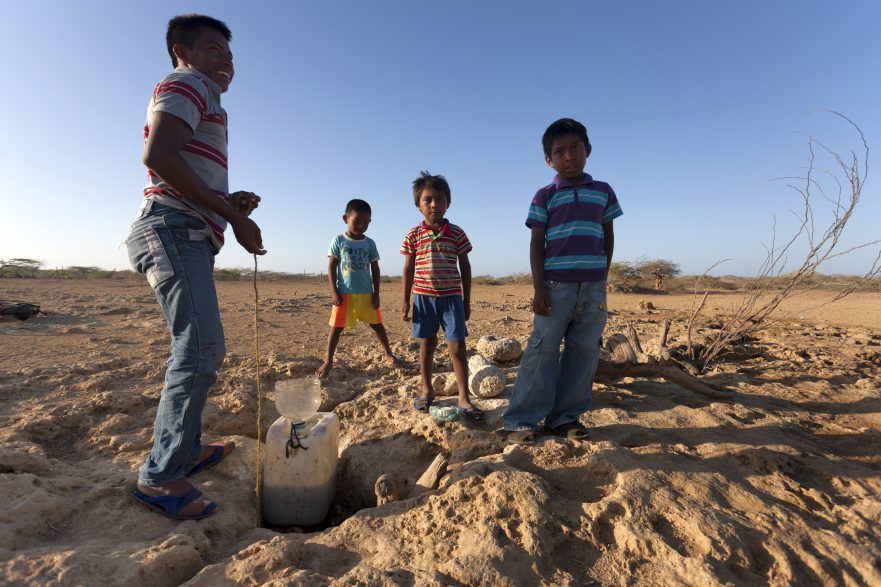 On 1 August 2017, the Embassy of Turkey in Colombia, the Fundación el Nogal, and the Universal Rights Group, with the support of Club El Nogal, organised an event to raise awareness of the situation of the rights of indigenous peoples (IPs) in Colombia. This event saw the participation of high-level representatives of the Colombian Government, leaders of indigenous communities, the Colombian Ombudsman, and various business and civil society representatives.

One of the objectives of the event was to make visible the role of IPs as environmental human rights defenders (EHRDs). As the Inter-American Court of Human Rights has acknowledged, IPs defending their rights also struggle for the protection of the environment, as both are intrinsically linked. Indeed, their culture, identity, and livelihoods depend on their close relationship with their land and resources. Hence, the virtuous cycle identified by Professor John Knox, UN Special Rapporteur on human rights and the environment, according to which ‘the exercise of human rights helps to protect the environment, and a healthy environment helps to ensure the full enjoyment of human rights’,[1] is especially true in the case of IPs.

The full enjoyment and respect of the rights of IPs are essential for achieving sustainable development, and therefore to deliver on the SDGs. The work and efforts of the IPs, in consequence, does not only concern their communities, but are also of the interest of the population at large.

Despite of this, and the fact that their rights should be respected, promoted, and protected in the same way as the rights of the rest of the population, IPs in Colombia (and Latin America in general) tend to live in contexts of exclusion. Indeed, they have higher rates of mortality, and are particularly affected by the large development projects. In Colombia, for example, at the 1 August event indigenous authorities explained that during the last couple of years more than 4.000 children have died in La Guajira from malnutrition. Their access to clean water has been constantly denied by local and national authorities, who have prioritised mining and other interests over their rights, ‘taking the only available river away [from them], and denying access to clean water.’[2] Not surprisingly, La Guajira is one the places most highly affected by corruption; with its three last governors being prosecuted for crimes associated with, inter alia, the mismanagement of public power and resources.

That exclusion has turned IPs into one of the groups of EHRDs that currently face the highest risks and threats. It is estimated that, on average, three EHRDs are killed every week, and around 50% of them belong to indigenous and tribal communities, and this is just killings – the easiest threat to report and identify.

On a daily basis, countless IPs are physically and psychologically assaulted, forcedly disappeared, threatened, and subjected to many more human rights violations, in retaliation for their work as EHRDs. As affirmed by an indigenous leader at the 1 August event, ‘women are particularly vulnerable to sexual violence.’ Criminalisation and the wrongful use of the judicial system[3] add to the list of means by which their voices and claims are silenced.

These risks and threats are catalysed by a ‘culture of stigmatisation’ –generally reinforced by the above-mentioned wrongful use of the law.[4] Companies, government officials, and even regular citizens tend to dub indigenous peoples as: anti-development, insurgents, enemies of the state, and ‘free-riders’, to name a few.

In many cases, such false characterisation is led and promoted by groups and people with powerful economic and/or political interests (contradictory to the IP’s interests) generally supported by corruption, impunity, and a weak rule of law. In other cases, however, it comes out of a profound lack of knowledge of what the indigenous peoples want, claim, and do; linked with the exclusion they live in. Such ‘unawareness’ permeates national policies, including human rights and national development plans.

That ‘culture of stigmatisation’ is so dangerous it has been blamed for triggering the use and tolerance of violence against IPs in general, and EHRDs in particular; and the disregard of the right to previous consultation (in breach of the OIT 169 covenant).

As such, instead of seeing John Knox’s virtuous cycle, we are witnessing a vicious cycle of exclusion and stigmatisation.

The projects and decisions that the IPs are opposing –including, inter alia, infrastructure development, and extractive industries – tend to be adopted without adequate consideration of the full impact these might have on their rights, and hence on the whole, as opposed to the majority of the population.

This means that a great number of decisions concerning the ‘development’ of the Latin American countries are leaving people behind, in direct contradiction of the 2030 Agenda for Sustainable Development.

In recent years, several Special Procedures mandate-holders of the Human Rights Council and a handful of NGOs have undertaken extensive efforts to understand and increase the visibility of the situation of IPs, as well as EHRDs. By systematically documenting and describing the issue at hand, they have raised awareness of it. However, and notwithstanding the valuable impact that their work has had, there is still a long way to go.

At the 1 August event, three representatives of over 1.000 indigenous communities expressed their frustration at the absence of efficient communication channels with the governments, and the lack of implementation of the recommendations, rulings, and standards issued by national, regional, and global mechanisms.

The barriers they face to communicate with the governments, including corruption, risks of retaliation, and lack of political will are not remedied by existing regional and global mechanisms. These systems are highly complex: they require technical knowledge the IPs often do not have (including sending a written submissions), and – obviously – simply knowledge of their existence, things that are usually unfamiliar to most IPs (and people on-the-ground).

This highlights the need of closing the huge gap that exists between Geneva and the rest of the world. Bringing the human rights system closer to the people is essential for achieving an impact on the ground, serving the purpose for which the system was created, and to deliver on the SDGs.

Moreover, at the same event, government officials recognised that bureaucracy and lack of communication amongst official entities are the biggest obstacles for the adequate implementation of international standards. Breaking these barriers and addressing the ‘on-the-ground’ obstacles is also essential for the efficiency of the human rights mechanisms. The growing interest in the ‘NMIRFs’ offers an opportunity to assess these obstacles and propose efficient and adequate solutions, perhaps, on a needs-based basis. It also represents an opportunity for increased technical assistance and capacity building.

Overall, the situation of IPs in Colombia, and Latin America represents huge challenges for the international human rights system, but at the same time an enormous opportunity to improve its efficiency and deliver impact on the ground.

[2] Quote of a Wayuu leader at the 1st August event.

Feature photo: European Union/ECHO/C. George 2015. The Wayuu – in particular the children – spend most of their day looking for water in dried up, saline or otherwise contaminated wells, drawing mostly brownish sludge unfit for human consumption, licensed under CC BY-NC-ND 2.0.