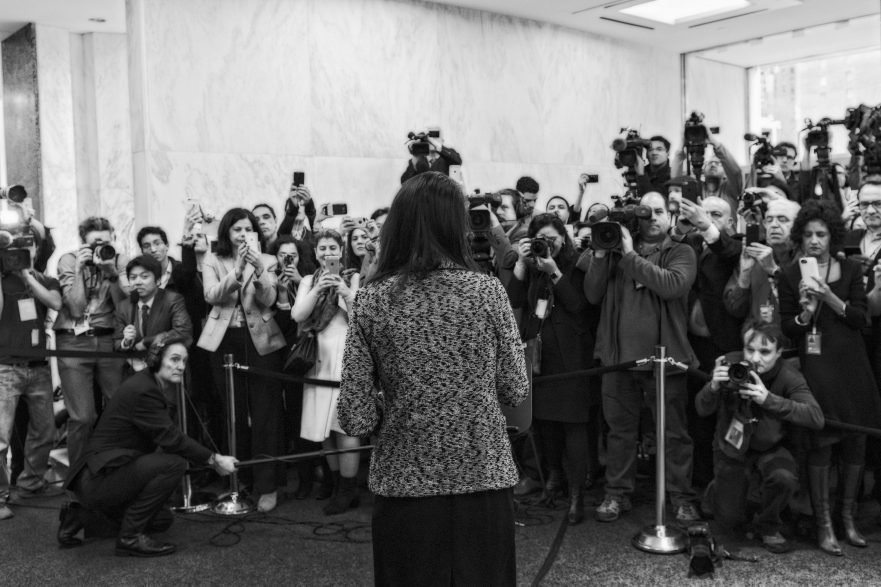 Are Antonio Guterres and Nikki Haley set to be New York’s new power couple? The future of the United Nations may rest on the duo’s personal and political chemistry.

Guterres has only been U.N. secretary-general since the start of the year, and Haley began work as U.S. representative to the U.N. ten days ago. But diplomats are watching both of them like hawks—and like what they see so far.

Guterres is a bundle of energy, intent on energizing the U.N. Secretariat after an era of enforced lethargy under Ban Ki-moon. Haley is a voice of calm, signaling to her foreign counterparts that she wants to work constructively with them, despite the utter chaos surrounding U.S. President Donald Trump.

Trump’s overall strategy toward the U.N. remains unclear. In the run-up to his inauguration, he threatened to penalize the organization as a whole for the Security Council’s decision to condemn Israeli settlement building in December. Yet, to date, the administration has satisfied itself with making grumpy remarks about UN. affairs.

The leak of a draft order mandating 40 percent cuts to U.S. contributions to the organization caused a brief bout of panic in late January, but the White House has shelved this idea for now. In her first public remarks at the U.N.’s headquarters as ambassador, Haley threatened she would be “taking names” of countries that fail to support American positions. Yet most diplomats presume this was a one-liner to please congressional Republicans rather than a genuine threat.

The president has even publicly advised Israel that building new settlements in the Occupied Territories was not conducive to resolving the Israel-Palestine conflict. The U.S. is likely to veto further Security Council resolutions on the settlements, but Trump seems to be stepping back from a big fight over the topic. Haley may try to engineer a fresh resolution condemning threats to Israel to balance out the December vote, possibly when the U.S. chairs the council in April.

Officials closer to the president than Haley still plainly view the U.N. with disdain. Discussing proposals to put pressure on Iran last week, National Security Adviser Michael T. Flynn declared, “The ritual of convening a United Nations Security Council in an emergency meeting and issuing a strong statement is not enough.”

It is hard to imagine how the erratically nationalist administration can get through its term without serious showdowns in New York. But Haley may be able to contain the damage from these disputes and patch up relations. To do that, however, she will need to convince the White House and Congress that she is simultaneously driving the U.N. to serve American interests better. This is where Guterres comes in.

Haley has emphasized that she wants to reform U.N. systems, and in particular modernize its peace operations. Guterres, who is clear-eyed about the flaws of the organization he now runs, has said very similar things. As I noted last month, one of his first acts on taking office was to launch a review of his secretariat’s mechanisms for overseeing security issues. He already appears to have a healthy disregard for the niceties and protocols of the U.N., cutting through bureaucratic structures to get competent officials to handle difficult problems, and insisting that they do so very rapidly.

This has inevitably bothered staff members accustomed to a distinctly more sedate way of doing business under the chronically cautious Ban Ki-moon. But if Guterres can force the U.N. system to start working more efficiently, and cut out bureaucratic dead wood along the way, it will play to Haley’s advantage as well as his own.

The more Guterres can make the U.N. system innovate, the more Haley will be able to tell Washington she is getting results. Ironically, the secretary-general may also be able to scare his staff and skeptical foreign diplomats into supporting reforms if he argues that the only alternative is a costly clash with the Trump administration.

So in an optimal scenario, Guterres and Haley could work together to make the U.N. leaner and meaner. This thought has already crossed the minds of some important people in New York and Washington. The Republican chair of the Senate Foreign Relations Committee, Sen. Bob Corker, joked during Haley’s confirmation hearing that it was hard to ascertain whether Ban Ki-moon “even had a pulse when big issues were being dealt with by the world,” but added that Guterres “seems to me to be somebody that really wants the United Nations to do what it was intended to do.”

Such praise may warm the new secretary-general’s heart, but he needs to avoid being seen as too close to Haley. Guterres was a popular choice for secretary-general in part because, unlike Ban, he was not obviously Washington’s candidate—and he was selected in October, when the idea of Trump winning the U.S. presidency was still considered farfetched and even comic. If Guterres hopes to safeguard his credibility, he has to maintain his autonomy from the Americans.

This will not be easy. Guterres appeared to be heading for an unfortunate stumble last week, when he took a couple of days to react decisively to Trump’s order blocking refugees and millions of Muslims from entering the U.S. He steadied himself just in time, releasing a carefully worded but solid denunciation of the ban. The pause may just have been the result of his top team still finding its feet, but it felt clumsy.

If Guterres and Haley are going to work together, they will have to air significant differences on a range of issues, and then get on with the job of collaborating as best they can. They may make an odd couple. Guterres is a veteran European socialist while Haley is a conservative former Republican governor. But they share at least one common interest: ensuring that historians do not conclude that U.S. relations with the U.N. collapsed irrevocably in the Trump era. Like it or not, their political fortunes are inseparable.

Richard Gowan is an associate fellow at the European Council on Foreign Relations and nonresident fellow at NYU’s Center on International Cooperation, where he was previously research director. He also teaches at Columbia University. His weekly WPR column, Diplomatic Fallout, appears every Monday.

This article first appeared on Richard Gowan’s weekly WPR column, Diplomatic Fallout, and has been reproduced with his kind permission.

Feature photo: On her first day at the United Nations, Nikki R. Haley (back to camera), the new United States Permanent Representative to the UN, speaks to journalists before presenting her credentials to Secretary-General António Guterres (27 January 2017). UN Photo/Mark Garten, licensed under CC BY-NC-ND 2.0.