Media coverage of the United Nations Human Rights Council in 2016 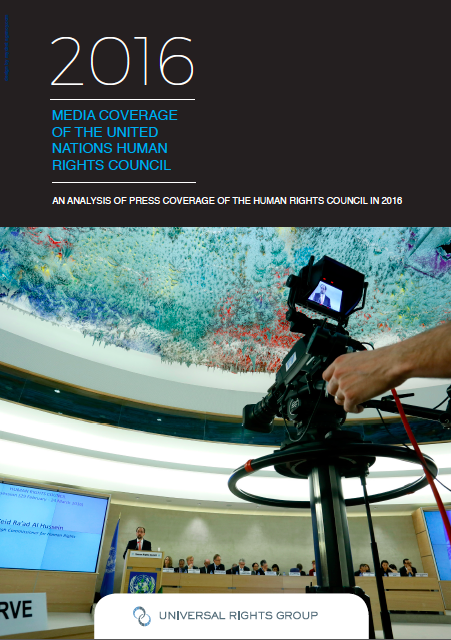 Global human rights crises and concerns are never far for the front pages of the world’s major newspapers, nor far from the screens of our TVs and iPads. Yet this major study of global media trends, conducted by the Universal Rights Group (URG) with the support of the Federal Republic of Germany, shows that the body established by the international community to respond to those crises and address those concerns – the UN Human Rights Council – has a relatively low public profile, both in absolute terms and as compared with other major UN bodies (e.g. the Security Council, the WHO). What is more, global media coverage of the Council and its work tends to focus on a quite narrow range of stories (e.g. the conflict in Syria or the situation in the Occupied Palestinian Territories).

In short: yes. The low profile of the Council is a potential challenge to its legitimacy, credibility and, ultimately, its on-the-ground impact.

It is essential that national populations are armed with the information they need to hold their governments to account against the commitments they make, and actions they take, at international level. The media can play a crucial role in providing that information, translating UN jargon into the everyday language of the world’s rights-holders and, eventually, transposing universal norms into local reality.

Notwithstanding this situation, there are reasons to be optimistic about the future.

First, URG’s media analysis shows that, compared with the proportion of UN resources attributed to human rights (a paltry 3% of the regular budget), the Organisation’s human rights pillar punches well above its weight in terms of media voice share.

Second, certain parts of the international human rights system are natural and effective global ‘spokespeople.’ A considerable number of press articles across 2016 were generated by, or directly referenced, the Special Procedures (26% of all Council media coverage) or the High Commissioner for Human Rights (24%).

Thirdly, while the press tends to focus much of its attention on a fairly narrow range of concerns (e.g. Syria, the OPT); scratch beneath the surface and it becomes clear that the media – and the public – take an interest in a notably wide array of issues and questions: from torture to terrorism, and from religion to climate change. The URG survey furthermore shows that the gegraphic spread of that interest extends from East to West and from the Global North to the Global South.

The survey therefore shows that a strong baseline exists from which the international community can take steps to strengthen the visibility, credibility and dynamism of the Council and the wider human rights pillar.

It is vital as we look to the year ahead, that all stakeholders – including Council members and observers, UN organisations, departments and officials, Special Procedures mandate-holders and civil society – seize the opportunity to improve communication and public relations, and leverage global public interest and scrutiny to power improvements in the Council’s effectiveness and impact.