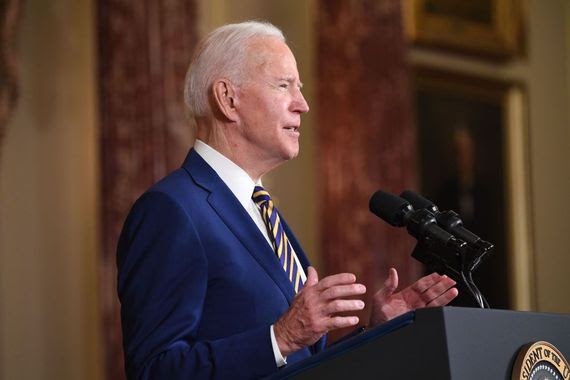 On Thursday 4 February 2021, Biden delivered his first major foreign policy speech. His decision to deliver the speech from the US State Department reflected his rhetoric on reinvesting resources and trust in America’s diplomats, and his words indicated an approach to international policy marked by working with traditional US allies to protect democracy and human rights globally.

Promising action has already followed since his speech. On Monday 8 February, Secretary of State Antony Blinken officially announced that the US would ‘immediately and robustly’ re-engage with the UN Human Rights Council. This news will likely be welcomed by human rights activists and US allies alike, as it demonstrates that the US is both committed to constructive Council reform and working with long-standing partners once again.

Speaking at the State Department served a dual-significance as it was Biden’s first visit to a federal agency as President. He made his visit to the State Department earlier than both of his predecessors, with Trump’s visit occurring a year into his term and after his firing of former Secretary of State Rex Tillerson, and Obama’s coming in 2011, three years into his first term.

A key part of Biden’s platform has long been a return to multilateralism. He has repeatedly derided Trump’s ‘American first’ approach to foreign policy and, just two weeks into his Presidency, has taken significant steps to shift from this course. As President, his first calls to foreign leaders have been to traditional US allies, and he has rejoined, or committed to rejoining, important international organizations such as the Paris Climate Agreement and the World Health Organization.

President Biden has repeatedly recognised that the US has a considerable amount of work to do if it hopes to reestablish itself as a leader on the global stage. It has now been made perfectly clear that Biden is committed to multilateralism and earning back the trust of traditional US allies. He has appointed cabinet members who share his positions, like his Secretary of State Antony Blinken. The State Department was left feeling largely sidelined under a Trump presidency which did not value diplomacy as a legitimate foreign policy tool. Blinken has made clear that he plans to build ‘morale and trust’ within the Department, because the US needs a strong State Department if it wants to be strong in the world.

Biden’s pick for US Ambassador to the UN, Linda Thomas-Greenfield, who has considerable foreign policy and diplomatic experience, has also expressed her commitment ‘to fight for international human rights and democracy through the return of an engaged US to international forums’.

In addition to filling his cabinet with officials committed to a pro-diplomacy, pro-human rights approach to foreign policy, Biden has recognised, both in his recent speech and prior, that the US must ‘earn back [it’s] leadership position.’ In order to, as Biden noted, ‘reclaim credibility and moral authority’, the US must rebuild its own democracy.

Biden on the issues

During his speech, Biden shared his administration’s position on a few critical foreign policy concerns. In his most clearly articulated policy position of the speech, Biden acknowledged the ‘humanitarian and strategic catastrophe’ that has resulted from the Yemen civil war, confirmed that the US would support the UN-lead cease-fire initiative, and would no longer support offensive military operations in the country. On Russia, Biden condemned the jailing of Alexei Navalny and the blatant denial of his human rights, along with those of journalists and Navalny’s supporters. In a reversal of a Trump administration policy, Biden ordered a halt in the removal of troops from Germany and a review of all current military operations in order to ensure that US troops are deployed in alignment with critical US interests. This is likely to please European leaders and domestic politicians alike, as Trump faced widespread and bipartisan backlash for this move. Finally, Biden called on the military in Myanmar to ‘relinquish the power they have seized’ and release those they have unrightfully detained.

Biden made it clear that he will take a hardline approach to adversaries like China and Russia, but will aim to deliver on such positions in a more practical and calculated manner. In his remarks, Biden asserted that the US would stop ‘rolling over’ in the face of its adversaries, especially those that seek to ‘damage and disrupt our democracy.’ He emphasised, however, that diplomatic relations will remain an option on the table, as the US would engage when it is ‘in America’s interest to do so.’

Despite his powerful message, the international community is still waiting to see how Biden will act. Of particular interest is how Biden’s assertion that ‘diplomacy is back’ will play out. Blinken’s announcement that the US will rejoin the Human Rights Council is a promising step. He detailed intentions to work with the Council in the immediate term as an observer, allowing the US to communicate with member States, participate in negotiations, and work with partners to introduce resolutions. The specification of this immediate term participation indicates that this is only the beginning for US engagement with the Council and, as US officials have suggested, that the US will plan to run for full membership in the Fall.

Blinken noted in his statement that the Council is a ‘flawed body’, but also that US withdrawal in June 2018 did ‘nothing to encourage meaningful change’. It is notable that ‘even the Council’s harshest critics have generally recognised that to make effective changes, one has to actually be present.’ This is also an opportunity for Biden’s administration to promote democracy, as URG has called on the Council ‘to play a more determined and activist role in shoring-up worldwide democracy and democratic institutions, and in promoting free and fair democratic elections.’ Should US leadership continue to act on their commitment to diplomacy, protecting human rights, and pursuing multilateralism, the potential for real change is growing.

Blinken’s announcement was preceded by a statement from the Chargé d’Affaires Mark J. Cassayre at a Human Rights Council organisational meeting Monday morning. In his statement he emphasised the Biden administration’s approach to a foreign policy defined by ‘democracy, human rights, and equality’ and how ‘effective use of multilateral tools is an important element of that vision.’ Echoing Biden’s desire to rebuild democracy domestically, Cassayre said the US will ‘bring this same sense of introspection’ to its work with the Human Rights Council. Such a statement is powerful, as it further represents the humility that has defined the Biden administration’s understanding of America’s current position in the world.

Biden concluded his speech by recognising that ‘America cannot afford to be absent any longer on the world stage.’ Such absence has not just been damaging to the international community, but has truly risked America’s future as a reliable and worthy partner. According to Biden, his administration is ‘ready to take up the mantle and lead once again.’