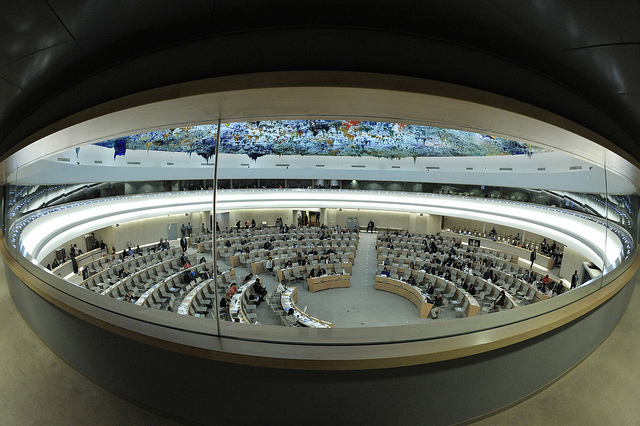 A policy report of Universal Rights Group (URG) on ‘Combatting Global Religious Intolerance: the Implementation of Human Rights Council resolution 16/18’ has rightly pointed out the complexities of the issues surrounding freedom of religion or belief and the fight against global religious intolerance.

The report provides useful historical insights about the UN’s journey to confront and combat racial and religious intolerance. It is interesting to note that on 25th November 1981 the UN General Assembly was able to adopt by consensus resolution 36/55 on the ‘Declaration on the elimination of all forms of intolerance and of discrimination based on religion or belief’.

It may be instructive to look back at this Declaration, given the current condition of international efforts to progress, in substantive manner, the issue of combatting global religious intolerance.

It is unfortunate to observe that today the debate on how to combat religious intolerance seems going nowhere – or even going backwards. Four years after the adoption of resolution 16/18, and the optimism that surrounded the inaugural meeting of its follow up mechanism, the Istanbul Process, the international community, instead of travelling forwards and implementing the 16/18 action plan, appears to be retracing old paths – paths characterized by divergent views on how to interpret the resolution and hence its follow up. Put it simply, the West tends to see 16/18 as an end-point in international discussion, what is important now is the domestic implementation; while the OIC saw 16/18 as a beginning, as a starting point for continued dialogue at international level, and implementation at all levels.

It is rather disappointing, in my view, that the recommendations contained in the URG report seems to take side with one of the views above. It suggests that 16/18 is an end-point. What matters now is its domestic implementation, complemented with international monitoring.

That is not to say that domestic implementation is not important. Indeed, it is most important. States have taken proactive measures to anticipate, prevent, and take swift actions to handle the violence related to religious intolerance. In this regard, fostering a climate of tolerance, mutual respect and transparent, accountable and non-discriminative law enforcement are key.

From my perspective, Indonesia has been (and will continue to be) undertaking these measures. In a country in which diversity and multiculturalism are an everyday fact of life, tolerance and mutual respect are ingrained in the mind-set of every Indonesian. Of course (unfortunately), intolerant views do exist and intolerant acts do occur. To try to address this, and as recognised in URG’s report, the Government has facilitated efforts to foster dialogue and conflict resolution between religious communities, through inter alia, the establishment of Forum of Religious Harmony, which acts at national as well as local levels.

The Constitutional Court has reviewed this law, which regulates against insensitive acts that may incite religious hostility and hatred, and decided that it is in line with the Constitution, including its human rights provision.

The law should be understood as an effort to manage relations between followers of the various religions in Indonesia. It is not intended to limit freedom of religion or belief or of freedom of expression or opinion. The law is intended to regulate the forum externum of religions, not interfere with the forum internum.

Furthermore, the law and other domestic efforts should be seen in the broader context of promoting and managing diversity and inter-religious harmony in Indonesia. That effort is dynamic: the Government continues to recalibrate and adapt efforts to handle the issue, taking into account developments on the ground as well as at international level. In this regard, new approaches, including reviewing and adjusting the law, are always possible. Currently, the Government is drafting a law on peaceful coexistence among religious followers, which also takes into account relevant international human rights law.

Having described Indonesia’s domestic efforts, let me now turn to the international situation, in particular the follow-up to resolution 16/18.

In my opinion, the 16/18 process can and should be further strengthened. That is because it does not sufficiently address the issue of sensitivity (related to human emotions) and the trans-boundary dimensions of the problem (related to the spread of information technology and increased population movements).

I am aware that discussing such matters will not be not easy, and will require further reflection, informed by, inter alia, the 1981 Declaration, the Rabat Plan of Action as well as other relevant documents such as relevant reports by OHCHR.

The elements of such as SOP can be drawn from the national, regional and international experiences of dealing with incidences of religious intolerance. There is no need to reinvent the wheel.

(Note: Indonesia’s joint effort with Norway to convene Global Inter-Media Dialogues between 2006 and 2008, can be an example of such prevention efforts. The Dialogues were held each year between 2006 and 2008, and attended by leading media figures from West and East and resulted in a commitment to promote mutual understanding and respect. The Dialogues also led to the creation of networks that serve as mechanism to share views and that can be mobilized to spread a message of peace and tolerance. Indonesia has also initiated regional interfaith dialogues together with the Philippines, Australia and New Zealand.)

Where violence has occurred

These are some provisional thoughts that would need to be further discussed and refined. Through such discussions it is hoped that resolution 16/18 can continue to provide a relevant, consensus-based and effective framework for combatting religious intolerance.

Caka A. Awal is the First Secretary in the Indonesian Mission in Geneva. The article is his personal view.