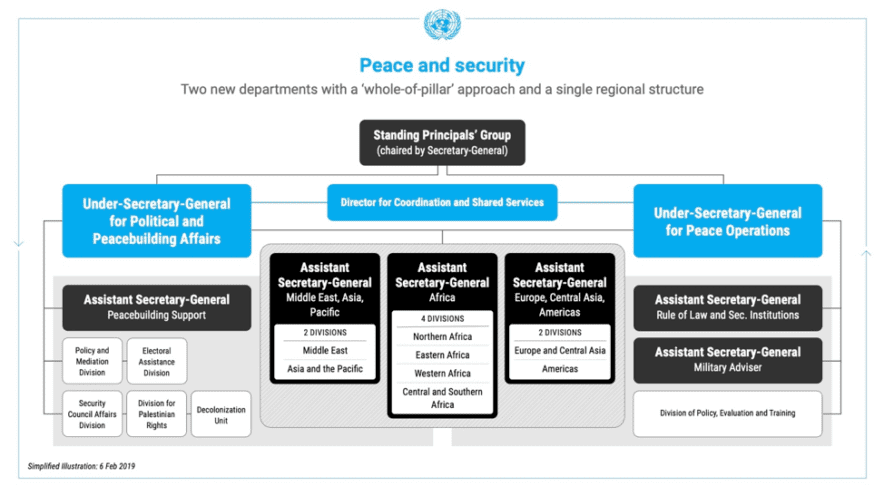 This post is the third in a series of blogs produced by the URG-NYC team to take stock of the implementation of the UN reforms, which were adopted in the past 18 months. This post covers reforms to the peace and security pillar.

All of the reforms are intended, to varying degrees, to modernise the UN, to streamline and increase the efficiency of its work, and prioritise delivery of services at the country level.

The main objective of the peace and security reforms is to improve the capacity of the peace and security architecture of the UN to support all stages of a ‘peace continuum,’ from prevention to conflict resolution to peace operations to peacebuilding. This necessitates a ‘whole of pillar’ approach, and thus the resulting reforms feature a reconstituting of the original departments as well as new connective tissue.

More specifically, the reform seeks to:

The newly created Department of Political and Peacebuilding Affairs (DPPA) combines the strategic, political, and operational responsibilities of the former Department of Political Affairs (DPA) and peacebuilding responsibilities of the previously stand alone Peacebuilding Support Office (PBSO) (A/72/772). The DPPA is intended to manage a spectrum of tools across the ‘peace continuum’ to ensure a more holistic approach to conflict prevention and resolution, electoral assistance, peacebuilding and sustaining peace. It will also provide strategic advice, direction and backstopping to special political missions.

A strengthened Peacebuilding Support Office within DPPA is intended to serve a ‘hinge function’ and connect the peace and security pillar with the development and human rights pillars, ensuring more system-wide coherence in support of priorities at the country level. The components of the former PBSO (policy, intergovernmental and financing) would remain integrated under the leadership of an Assistant Secretary-General managing the Peacebuilding Fund and supporting the Peacebuilding Commission. The terms of reference of the Peacebuilding Fund will ‘remain unchanged and functionally linked to the Executive Office of the Secretary-General, providing a catalytic, timely and flexible pre-positioned pooled fund as a facilitator for sustaining peace across the United Nations system’ (A/72/525).

The Department of Peace Operations (DPO) will provide direction, management and support for peacekeeping and field-based special political missions (that are not under the authority of the DPPA). This includes facilitating and implementing political agreements, and providing strategic, political, operational and management direction and support to peace operations. Given the cumulative experience in peace operations that the UN has developed, the DPO is also intended to be a “center of excellence.” It will also be working on the peace continuum that DPPA is supporting, responsible for preventing, responding to and managing conflict, and sustaining peace in countries where deployed.

The DPPA and DPO will share a single regional political-operational structure existing between them, which is divided by regions and which will provide day to day guidance and analysis. This regional structure will link prevention, mediation, conflict-resolution, peacekeeping, and peacebuilding, and connect all of them to long-term development. This regional bridge may also facilitate smoother transitions between different types of UN operations, as both the DPPA and DPO will be working with the same regional teams within this structure.

A Standing Principals Group (SPG), has been established which will include the Under-Secretaries-General for DPPA and DPO, will be chaired by the Secretary General and is intended to provide unified leadership for coordination, communication and coherence at the Secretariat, and to support senior leadership on the ground (A/72/525). This SPG can also include Under-Secretaries- General of related offices such as the Offices of Counter-Terrorism and of Disarmament Affairs. The SPG will meet quarterly and on an ad hoc basis. It will ‘not duplicate existing strategic level decision-making mechanisms in the Secretariat but will serve as a forum to ensure unified decision-making on peace and security matters’ (Letter from the President of the General Assembly, November 2018).

Connections to other reforms

The reforms to the UN management system are inter alia aimed at supporting and enhancing the work of the peace and security pillar by simplifying the existing administrative policy framework and decentralising and delegating decision-making administrative authority to senior managers, including heads of missions. This allows the peace and security pillar to be more adaptable and responsive to situations on the ground. Development system reforms, including changes to the Resident Coordinator System, UN Country Teams and UN Development Assistance Frameworks (UNDAFs) may also potentially widen the range of tools for prevention and peacebuilding at the country level.

Within the peace and security pillar, the Standing Principles Group aims to provide a ‘high-level entry point’ for the development and human rights pillars (A/72/525). The Peacebuilding Support Office within the DPPA will be reinforced to assume a stronger bridging role, exercising a hinge function, and connecting the peace and security pillar with the development pillar, human rights pillar and humanitarian actors. ‘It will be responsible for connecting relevant tools and approaches across the conflict spectrum, drawing together the expertise of the United Nations system to facilitate coherent system-wide action, and for strengthening partnerships within and beyond the United Nations’ (A/72/707).

The SG’s report A/72/707 notes that ‘the collective work of the United Nations system to advance human rights should help to identify the root causes of and responses to conflict. In that respect, it will remain imperative for the peace and security and development pillars to make use of the existing human rights mechanisms, such as special procedures, the treaty bodies and the universal periodic review and their recommendations in support for Member States.’

There are considerable opportunities for elements of the peace and security pillar to utilise human rights related tools, analysis and data, with the objectives of supporting Member States in preventing serious violations of human rights and conflict, and bolstering efforts at sustaining peace. Furthermore, the notion of providing support along a ‘peace continuum’ offers a holistic understanding of providing preventative and resilience building support for Member States.

There are opportunities for cross-pillar collaboration in the new structures. As mentioned above, the Standing Principles Group is intended to provide a ‘high-level entry point’ for the human rights pillar and development pillar. The Peacebuilding Support Office within the DPPA is intended to provide a hinge function to link the work of the peace and security pillar with other peacebuilding elements, including human rights. In addition, the single regional political operational structure bridging DPPA and DPO is intended to develop a comprehensive understanding of the drivers of conflict in which ‘analysis must also be reinforced with better links to the rest of the system and greater coherence with the development and human rights pillars’ (A/72/525).

A more responsive peace and security architecture envisioned to support the work of the UN across peace continuum and set to utilise tools across the UN system, opens up myriad positive possibilities. But many remain concerned about the lack of codification of linkages and spaces for human rights related work in the peace and security structures.

Codification comes with its own political hurdles, but a lack of designated support or space carries risks as well. As one onlooker put it ‘human rights could be everywhere or nowhere in the new system.’ Not all practices and policies need to be legislated, but the absence of dedicated linkages could leave good practices unprotected (and unexplained) given inevitable shifts in personnel, and the already considerable changes that those in the DPPA and DPO must contend with.

For the stated objectives of prevention and sustaining peace to succeed, cross-pillar integration, including the constructive (and innovative) integration of available human rights tools and data, must be actively supported, and cannot be guaranteed by the new changes.