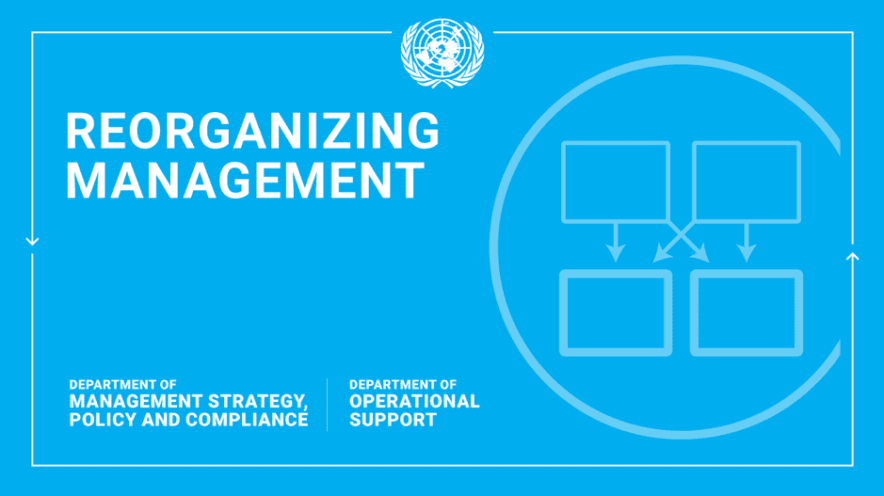 This post is the second in a series of blogs produced by the URG-NYC team to take stock of the implementation of the UN reforms, which were adopted in the past 18 months, and provides an update on perhaps the most opaque series of reforms: changes to the UN management system.

All of the reforms are intended, to varying degrees, to modernise the UN, to streamline and increase the efficiency of its work, and prioritise delivery of services at the country level. This is particularly evident in the reform of its management architecture. The management reforms are about modernising a highly centralised management system developed in the 1940s and 1950s to reflect a modern field-based UN. As such priorities for management reform include:

To accomplish these priorities the management reform’s biggest shift decentralises decision-making – delegating to managers, including heads of entity on the ground, such as resident coordinators, the necessary managerial authority over human, financial and physical resources – to allow for effective mandate delivery (ST/SGB/2019/2). This decentralisation of authority would reduce the need to frequently refer back to UN headquarters, and thus potentially increase the speed and malleability of UN response. Furthermore, it would bring decision making closer to the country level and point of delivery, empowering managers and heads of entities to efficiency manage resources needed for the implementation of their mandate.

This decentralisation of authority also required more authority for the Secretariat, so the management reforms have included mechanisms to increase transparency and accountability to ease mistrust and concerns among Member States. That said, many of elements of the reforms, such as the delegation of authority, depend on a cultural change, as well as a change in bureaucratic rules to be fully successful.

The new Department of Management Strategy, Policy and Compliance (DMSPC) is responsible for external entities on issues related to the overall management of the Secretariat, such as:

It consists of a number of new departments (read here for more information on these departments), including the Business Transformation and Accountability Division, within which there exists many separate divisions that enable evaluation and monitor programmes, as well as reporting and observing the delegation of authority, and identifying risks in projects before they occur. This is considered ‘a critical pillar’ of DMSPC, focusing on risk prevention, and self-evaluation, ensuring that the UN Business model is aligned with the internal UN changes as well as global shifts.

It consists of five pillars:

It has two main functions; to support decision-making by senior managers, and to also support the implementation of decisions through operational support. The previous departments were vague in regards to division of responsibility, particularly when it came to peace operations. These new departments aim to work more efficiently by setting clear defined roles and responsibilities to avoid duplication of work, and achieve positive results.

Revised framework on delegation of authority 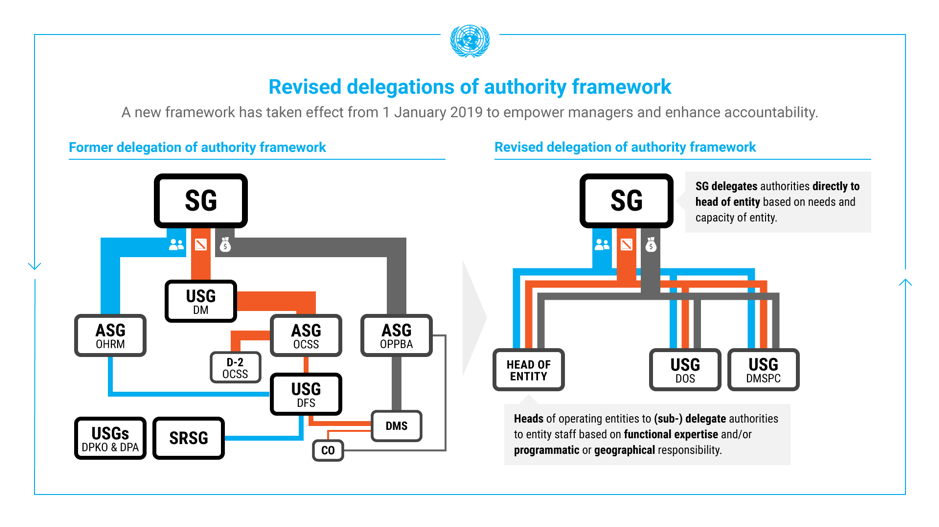 In addition to these new departments, management reforms have involved the reframing of the delegation of authority. This revised framework will place greater emphasise on accountability and decision-making that focuses more on more closely linking authority over managements decisions to those whose mandates require it (rather than the previous more circuitous route in which these responsibilities were divided). For reference, you can also read the Secretary-General’s bulletin on the subject.

The goal is for senior managers to be provided with sufficient tools to manage programmes, and to be held accountable. Member states will also have clearer pathways in communicating with the Secretariat. Regional organisations will now no longer have to deal with different departments.

Connections with other reforms

The report of the Secretary-General on shifting the management paradigm, resolution A/72/492, states: ‘the unprecedented challenges confronting the UN across the spectrum of peace and security, humanitarian action and human rights projects and sustainable development will not be met unless our Organization find better and stronger means of putting the full force of our capacities at the disposal of the Member States, the international community, and the peoples we serve.’

The Secretary-General has emphasised that the reformed management system will operate as a decentralised but tightened nervous system that ensures that all UN pillars and operations run more smoothly and are more flexible. It can also be very helpful, for senior managers and UN staff working in development and peace and security pillars, including at the country level, to operate having a simplified system of procuring resources linked to the relevant authority and that authority’s mandate.

The Secretary-General Guterres has also said that ‘Management reform must ensure we reach gender parity sooner rather than later.’ This demonstrates that he envisioned gender parity as part of his wider effort to reform UN management systems, creating an early conceptual link between his Gender Parity Strategy and what we now know as the UN reforms. However, it is important to remember that the Gender Parity Strategy is in a separate stream to the Management reforms, even though there is substantial intersection, with the SG even stating that UN management wouldn’t be complete without gender parity.

And what about human rights?

The first paragraph of A/72/492/Add.2 states, ‘the United Nations must demonstrate its ability to adjust in order to keep pace with and address, effectively and accountably, these contemporary challenges to international peace and security, economic development, and respect and protection for human rights.’ While the human rights pillar is not explicitly mentioned nor human rights extensively explored, this is a nod to the idea that without efficient management, the UN would be less capable of promoting human rights and responding to human rights violations.

The potential benefits of management reform are reflected in this comment from former High Commissioner for Human Rights Zeid Ra’ad Al Hussein at the opening of Glion V: ‘Many aspects of management reforms are extremely positive (for human rights); they open the path to a simpler, more rapidly operational system, with considerable delegation to heads of entities across the Secretariat.’

These reforms increase the potential of UN actors, particularly those in the field, to make decisions and exercise their authority in accordance with their mandate, in a more empowered and adaptable manner, which can be helpful when this enhanced capacity is wielded to promote human rights and prevent and respond to human rights violations. The trick may be ensuring that, despite the absence of explicit human rights references in the agreed upon texts, newly empowered UN actors are adequately supported in this new structure to support all three pillars, including the human rights pillar.