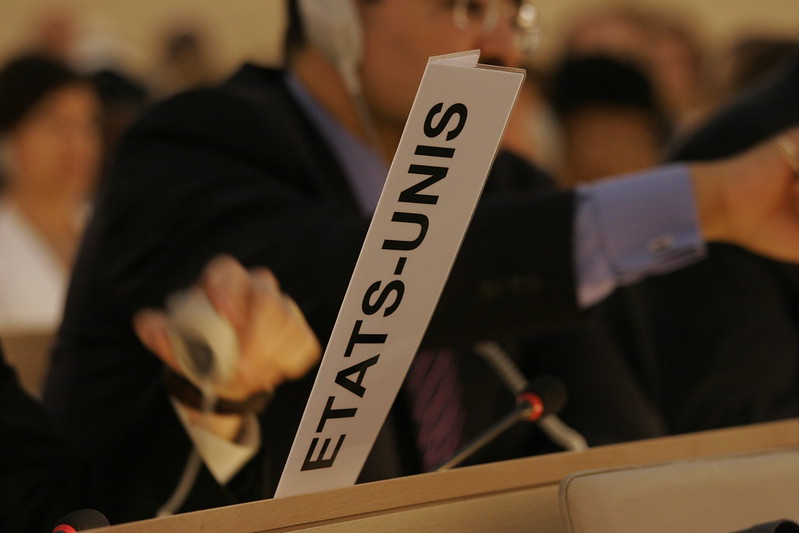 The United States has always had a somewhat contentious relationship with the international human rights project. It has never ratified the International Covenant on Economic, Social and Cultural Rights (which today has over 150 states parties) or the Convention on the Elimination of All Forms of Discrimination against Women (which has 185). It became the sole holdout on the Convention on the Rights of the Child, after Somalia ratified the treaty in 2015. And it has never tried to ratify the Rome Statute, which established the International Criminal Court in 1998. David Scheffer, US war crimes ambassador and chief negotiator at the Rome conference, wrote later that US ‘exceptionalism’ characterized its approach to the ICC. ‘By ‘exceptionalism’ in the realm of international law,’ he explained, ‘I mean that the United States has a tradition of leading other nations in global treaty-making endeavors to create a more law-abiding international community, only to seek exceptions to the new rules for the United States.’ (Scheffer, p. 135.)

In terms of US exceptionalism to the international order, the past four years have seen a shift not only in degree but in kind. Where past administrations held international institutions and human rights bodies at arm’s length (both Presidents Barack Obama and George W. Bush were willing to cooperate with the ICC, so long as they could ensure that no US nationals would be subject to its jurisdiction), the administration of President Donald Trump launched a wholesale attack on not only those international institutions which protect human rights, but all mechanisms of international peace, security, and cooperation.

During his first two years in office, President Trump oversaw a sweeping retreat from multilateralism. In 2017 the US withdrew from the UN Educational, Scientific and Cultural Organization (UNESCO); the UN Population Fund (UNFPA), which promotes family planning across the world; and the Paris Climate Agreement. Starting in 2018, the President has railed against the North Atlantic Treaty Organization (NATO), even raising the possibility of backing out of the alliance, which has been in place since 1949. And in June 2018, the United States withdrew from the United Nations Human Rights Council (UNHRC). Defending the decision, then-US Permanent Representative to the UN Nikki Haley described the Council as a ‘protector of human rights abusers and a cesspool of bias’ which ‘makes a mockery of human rights.’

The year 2020 has seen an escalation of this foreign policy. As American COVID-19 cases ratcheted upwards in July, the US notified the UN of its intention to withdraw from the World Health Organization (WHO). And in September, the US imposed sanctions on two ICC officials, one of them the ICC’s Chief Prosecutor, Fatou Bensouda, freezing any US-based assets they might have and imposing visa restrictions. Announcing the sanctions, Secretary of State Mike Pompeo confusingly asserted that ‘Americans are proud to stand for truth and justice’ and ‘have no intention of letting the ICC’s illegitimate activities become a barrier to that pursuit.’

According to the current administration, such retrenchment symbolizes the United States’ status as a bulwark against the international system’s ‘blatant flaws,’ ‘recklessness,’ and ‘politically-driven targeting of US personnel.’ In place of the global human rights framework, the administration has attempted to redefine human rights as a whole, most aggressively through Secretary Pompeo’s establishment of the ‘Commission on Unalienable Rights.’ The Commission has been roundly rejected by human rights advocates in the US and across the world and described as a transparent attempt to elevate religious liberty above other fundamental rights ‘to what [Pompeo] views as its rightful place as the world’s ‘foremost’ right.’

Many of the administration’s other moves suggest that its claims to human rights leadership should be viewed with incredulity, to put it mildly. The President has cozied up to a host of dictators, including Crown Prince of Saudi Arabia Mohammed bin Salman, Philippines President Rodrigo Duterte, and, of course, Russian President Vladimir Putin. Beyond giving implicit approval to the frightening acts of these rights abusers, the US has repeatedly ignored its own obligations under international law abroad—including by unilaterally assassinating Iranian General Qassem Soleimani on a questionable interpretation of a nation’s ‘inherent right of self-defense’—and at home. The current administration has ramped up use of the death penalty, denied and exacerbated the appalling effects of deeply embedded structural racism, directed highly militarized police to crack down on peaceful protesters, restricted the right of asylum, and committed horrendous human rights abuses against immigrants in violation of the UN Refugee Convention—a treaty to which the United States is, in fact, a party. In recent weeks, the administration and its leader have threatened the most fundamental institutional rights promised to citizens of a democratic nation, suppressing the right to vote and refusing to commit to a peaceful transfer of power.

In this context, the US elections on November 3 have extraordinary consequences for both Americans and the world. The official platform of the Democratic Party, to which presidential contender former Vice President Joe Biden and his running mate Senator Kamala Harris belong, offers an explicit commitment to ‘rejoin and reform’ the WHO, the UNHRC, the UN Population Fund, and the Paris Agreement. It promises to ensure ‘immigration agencies abide by . . . international law.’ While his own platform does not contain the same clear commitments, Biden has laid out a comprehensive plan to regain the United States’ standing in the world, pledging to roll back several of Trump’s asylum policies; reinvest in diplomacy; combat kleptocracy and authoritarianism; reaffirm the torture ban; restore Obama-Biden policies to reduce civilian casualties; build a stronger NATO; and host a global Summit on Democracy.

The Democratic Party’s ‘rejoin and reform’ formulation suggests that a Biden administration’s re-engagement with the international human rights project will not be a simple re-commitment to the institutions and norms that the current administration has attacked. Indeed, an uncritical resumption of the country’s international human rights obligations is neither expected, given the United States’ historically tenuous relationship with those institutions, nor desirable. For example, the Trump administration justified its withdrawal from the UNHRC as a response to the Council’s inordinate focus on Israel and its willingness to allow human rights-abusing regimes to serve as members. As Human Rights First and others have pointed out, neither of these arguments is entirely without merit. Human Rights First therefore recommends that the US pair its necessary return to the UNHRC with diplomatic leadership and launch a ‘concerted diplomatic effort to assemble a likeminded coalition’ whose members must sign a public pledge detailing the ‘coordinated steps they would undertake to strengthen the Council.’

In the 1990s, during the negotiations over the ICC, the Scheffer-led US delegation consistently tried to limit the ICC’s authority by ‘carv[ing] out zones of impunity that would place American conduct beyond international legal scrutiny’ (Stover et al., p. 166). At one point, the US tried to restrict the ICC’s ability to launch investigations into human rights violations to situations to which the UN Security Council had given its express approval. The rejection of this proposal led then-Secretary of State Madeline Albright to ask Scheffer, ‘What can we do to blow up the entire conference?’ Twenty years later, the Trump administration’s shocking sanctioning of top ICC personnel preserved the core rationale behind US resistance to the ICC: the need to protect US persons from international criminal jurisdiction.

The United States’ longstanding commitment to its own exceptionalism makes it improbable that Trump’s loss, should it occur, would automatically elevate the US to a heightened position in the vanguard of the international human rights project. But a new administration will provide an opportunity for the US to make the enormous effort required, domestically and abroad, to advocate without hypocrisy for a world order premised on respect for human rights. It will provide an opportunity for the United States to begin to align its foreign policy with its espoused values, and work in partnership to contribute to a world that upholds the dignity of every individual.

David Scheffer, All the Missing Souls (2012)

Eric Stover, Victor Peskin, Alexa Koenig, Hiding in plain sight : the pursuit of war criminals from Nuremberg to the War on Terror (2016)