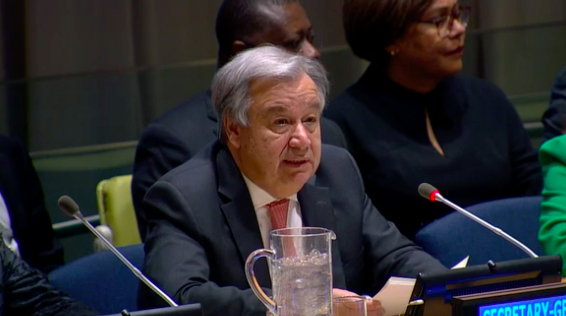 In 2017, Secretary General António Guterres unveiled extensive plans to reform the United Nations Development System (UNDS). His proposal, which coincides with parallel measures to restructure the UN’s peace and security architecture and revise its management paradigm, is part of a broader agenda to make prevention a cross-pillar priority. More specifically, the repositioning of the UNDS seeks to foster an integrated approach to development that meets the requirements of the 2030 Agenda for Sustainable Development.

In his July 2017 briefing to ECOSOC, the Secretary General affirmed that sustainable development is the “most powerful tool for prevention.” His claim echoes the findings of several key studies such as the joint UN-World Bank’s Pathways for Peace report, which argues that risk informed development strategies are central to ensuring conflict prevention. Furthermore, although not explicitly framed as a human rights instrument, over 90% of the 169 Sustainable Development Goal (SDG) targets comprising the 2030 Agenda are rooted in international human rights treaties. Indeed, one of the main objectives of the 2030 Agenda, as stated in its preamble, is to “realize the human rights of all.”

In December 2017, the Secretary General submitted his report on the repositioning of the UNDS to the General Assembly. The primary goal of the UN Development System (UNDS) reform is to place sustainable development at the “heart” of the UN, to more effectively support member States in their efforts to implement the 2030 Agenda, and to enhance States’ ability to “build resilience, prevent crises, ensure human rights are a lived experience and sustain peace.” Central to this effort is the reinvigorated role of the Resident Coordinator system, led by impartial, independent, and empowered Resident Coordinators (RC).

Established in the late 1970s, the RC system is responsible for coordinating the development activities of the different UN entities on the ground. As leaders of UN Country Team (UNCTs), RCs ensure that UN assistance aligns with national development priorities as stipulated in government-endorsed UN Development Assistance Frameworks (UNDAFs). RCs are also expected to consistently reinforce principles enshrined in the UN Charter, including the promotion of human rights.

Reconciling these responsibilities can be challenging. As the report of the Internal Review Panel on UN Action in Sri Lanka articulates, “[t]he UN can face significant challenges in retaining the essential support of a Government to help in delivering assistance while at the same time responding to serious violations of international law that may require the UN to issue criticism of the same Government.” The report concluded that the RC received inadequate support from UNHQ, and as a result UNCT members failed to stand up for the rights of the people they were mandated to assist, and the RC failed to convincingly leverage his senior development position to secure Government commitment on the protection of civilians. This put into question the RC system’s ability to effectively respond to grave human rights crises.

The report led to the creation of the Human Rights up Front (HRuF) initiative, which put into practice key operational changes. In 2014, the RC job description was revised to include core human rights responsibilities, and RCs received human rights training. An inter-agency exercise carried out at senior level at UNHQ, known as the Regional Quarterly Review, was established to support RCs and UNCTs by jointly scanning all countries for early warning signs. The initiative also promoted consideration of the deployment of additional, temporary staff with human rights expertise to support RCs and UNCTs in volatile situations. Despite resulting in early improvements to the UN’s prevention approach on the ground, the initiative was never fully operationalized. Even at its highpoint, many RCs continued to show restraint in advocating for human rights protection for fear of losing favor with host governments.

This illustrates both the inherent constrains of the RC system as well as the importance of effective leadership. RCs were mandated to focus on development activities. Engaging in politically sensitive matters could be interpreted by the host country as a violation of sovereignty, possibly resulting in the RC’s expulsion or the closing of access to UN development and humanitarian assistance.

Despite these constrains, RCs can and often do play a pivotal role in strengthening national prevention capacities, and in raising politically sensitive human rights issues. A recent report of the United Nations University Center for Policy Research found that countries “emerged less conflict-prone due to the preventive work carried out by RCs and UNCTs.” By focusing on national ownership and providing expert analysis on the added value of preventive measures, RCs can encourage host governments to implement risk-informed development activities. Effectively balancing trust-building and prevention advocacy however requires tremendous leadership skills on the part of RCs.

In its former configuration, RCs were de-incentivized to push the boundaries of an often narrowly interpreted development mandate. In his briefing to ECOSOC on the repositioning of the UNDS, the Secretary General noted that, despite being primarily development geared, RCs “must also be able to take a broader view and lead integrated analysis and planning processes which have significant implications for achieving the [SDGs]. They must also support Governments in crisis prevention focused on building resilience and anticipating shocks that could undermine progress.”

To accomplish this, the reform de-links the functions of the RC from UNDP Resident Representatives, essentially relocating the RC system—and the Development Operations Coordination Office (DOCO)—from UNDP to the Executive Office of the Secretary General (EOSG). This rearrangement addresses a long-standing criticism that RCs were primarily beholden to UNDP, despite representing the interests of all UN development entities. No longer bound to UNDP, the new structure promises a more impartial, independent, and empowered RC, able and encouraged to adopt an integrated approach to sustainable development, in line with national needs and priorities. At the country level, the reform calls for a new generation of flexible UN country teams (UNCTs), adequately staffed to meet member States’ development needs and priorities, with strengthened accountability lines to agency headquarters and RCs.

The Secretary General’s vision for a more dynamic RC system was met with considerable resistance from member States. In the September 2018 briefing on the RC System Implementation Plan, Egypt, speaking on behalf of the Group of 77 and China, commented that better integration between development, humanitarian, and peacebuilding efforts should only take place “in countries facing humanitarian emergencies and in countries in conflict and post-conflict situations.” In a Second Committee meeting a month later, a Cameroonian representative declared that any deliberations on the repositioning of the UNDS must avoid the areas of conflict prevention or peace and security, which “could lead to interference in political processes and violate the sovereignty of States.” These concerns regarding broader interpretations of the RC’s mandate, rooted in arguments of sovereignty and the perils of securitizing the development agenda, were assimilated by the General Assembly resolution on UNDS reform, which makes zero references to the RC’s role in supporting prevention and promoting human rights.

The UNGA resolution set in motion one of the most ambitious reforms of the UNDS since at least the 1960s. The de-linking of functions from UNDP will allow RCs to focus exclusively on coordinating 2030 Agenda implementation efforts. For example, time RCs would have previously dedicated to their dual role as UNDP Resident Representative (RR) can now be used on other issues critical to the RC mandate. RCs will also have greater authority on the configuration of UNCT country-level presence as well as on respective agency programmes, reducing fragmentation and addressing the often cited “administrative jungle” of the UNDS.

With the final decision on UNDAF strategic objectives for host government consideration now resting on RCs, the Secretary General can ensure that adequately integrated approaches, including human rights-based approaches (HRBAs), are sufficiently incorporated into UNDAF programming. This will complement efforts to mainstream human rights, which is currently one of five UNDS programming principles of strategic engagement at the country level.

Despite these tools, RC success will continue to largely depend on effective leadership and host government cooperation. No longer able to discretely promote preventive measures under the development disguise and resource-leverage of UNDP, RCs may find themselves handled with more caution and given less flexibility than before. Furthermore, countries may commit to the 2030 Agenda in principle, but decide to selectively implement it, choosing, for political reasons, to ignore development needs that should be of concern and priority. This issue is exacerbated in conflict-prone countries where early warning signs are detected. In such circumstances, RCs will have a difficult time addressing the underlying problem if they are unable, or feel inadequately supported by UNHQ, to employ a more confrontational stance.

As General Assembly President Miroslav Lajčák stated in 2018, the UNGA resolution on UNDS reform “is not seen by everyone as the perfect document. But it is a legitimate outcome of a multilateral process,” based on the international community’s shared commitment to the 2030 Agenda. While RC success will continue to depend on host countries commitment to leaving no one behind, the repositioning of the UNDS provides RCs with tools to promote a more integrated approach to UNDAF programming, informed by human rights, in order to achieve sustainable and equitable development.