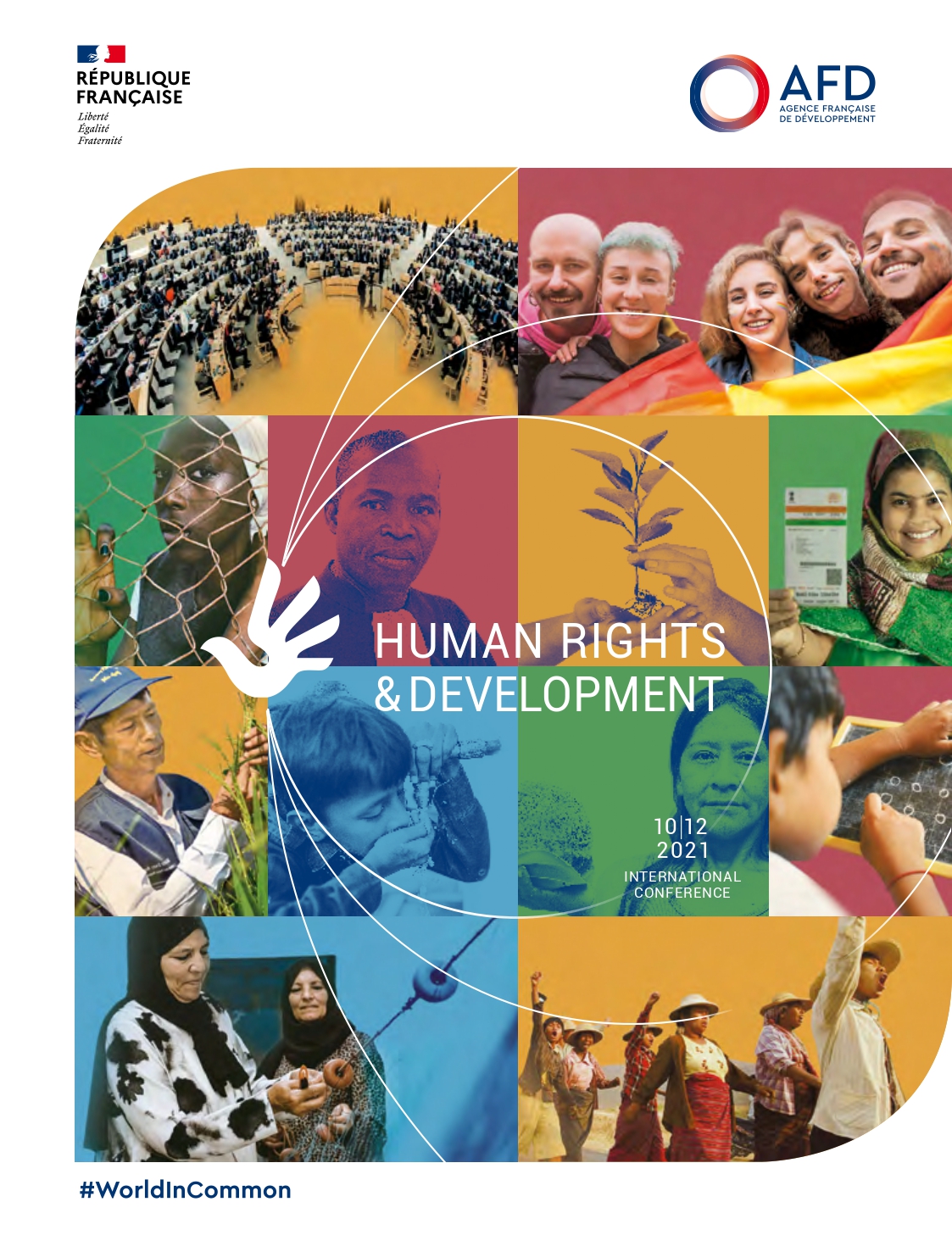 Against a background of the retreat of human rights worldwide, growing doubts about the ability of the international community to achieve the Sustainable Development Goals (SDGs) by 2030, growing inequalities, and the ecological and climate crises, on Human Rights Day 2021 (10 December) the French Development Agency (AFD) organised an international conference on ‘Human Rights and Development.’ It brought together 500 actors from the development community, covering both the global North and South, and considered how development actors can play a key role in securing improvements in the enjoyment of human rights while at the same time recharging progress towards the achievement of the SDGs ‘leaving no one behind.’

The conference proceedings from the meeting were recently released in both French and English and provide important recommendations to development actors on how to make development assistance work for human rights and vice versa.

Warning of the risk of failure of the 2030 Agenda if development actors do not promote a development model based on human rights, participants unanimously recommended moving away from both a solely economic vision of development and a purely normative approach to human rights. In that regard, they called for more concerted action to enhance development actors’ contribution to the realisation of human rights on the ground, and to develop more robust indicators for measuring the impact of the human rights based approaches (HRBA).

Notwithstanding, several recalled the challenges involved in convincing partners of the value-added of integrating human rights with the development agenda, and recommended undertaking research actions to provide evidence.

Panellists further emphasised that human rights constitute a universal framework that goes beyond the North/South divide and is applicable to all. They noted a strong demand for improvements in the enjoyment of human rights in the global South as evidenced by growing social movements often led by young people. The universal nature of human rights makes it possible to fight against arbitrariness by guaranteeing a minimum essential base for everyone without discrimination. The international corpus of human rights contributes, in this sense, to reducing inequalities, so that everyone can lead a decent and dignified life. This must be reflected in the fiscal resource mobilisation policies of States, but also in their budgetary policies for social investment in health, education and social protection. States and development actors must also address the structural causes of inequality, which include discrimination based on gender, sexual orientation, economic status, and minority status, all of which are prohibited under international human rights law. For this reason, development actors are invited to contribute to the collection of reliable data on vulnerable population groups, in order to design projects with a non-discriminatory and inclusive approach.

Speakers also agreed on the need to support civil society and preserve its space. Its role in observing, documenting, and monitoring the implementation of States’ human rights obligations is essential. It is therefore crucial to establish a culture of dialogue between a State/government and civil society when elaborating public policies, and to strengthen the capacity of CSOs to participate effectively. ‘Power should be fluid, distributed throughout society, shared and exercised collectively,’ argued one speaker.

In terms of business and human rights, participants recalled companies’ duty of care to prevent and remedy human rights violations in the course of their activities. At the international level, this duty is based on a voluntary approach which, it was argued, showing signs of strain – few companies actually mobilise vigilance mechanisms in their value chains. Nevertheless, there is a progressive movement towards the adoption of national legislation in countries where multinational companies are headquartered to make it compulsory to draw up and implement vigilance plans that cover the impact of their activities, and those of the actors integrated into their supply or value chains, and covering both human rights and the environment. In this way, the objective is to spread human rights throughout the value chain, starting ‘from the top,’ and to contribute to guaranteeing the enjoyment of human rights of those affected by business activities. However, this raises the challenge of the cost and capacity to implement the principles of the duty of care by all actors in the value chain, in particular those in the Global South. Development actors have a role to play in supporting them. A need was also identified to strengthen the dialogue between legislators in the countries where companies are headquartered and those in which they operate in order to build coherent and complementary legislative frameworks.

Beyond companies’ duty of care, the private sector also plays a key role in contributing to development. Speakers called for multinational companies to be held accountable so that, in addition to respecting human rights, they contribute more directly to reducing inequalities and poverty.

Throughout the conference, the discussions have also highlighted the inseparable links between the realisation of human rights and the protection of the environment. These two goals are not mutually exclusive, as the rights of nature guarantee the enjoyment of human rights. It is thus crucial to promote an approach to development that is not based solely on human rights, but include the rights of all living things. This is especially important, it was noted, for young people and future generations.

In this context, the panellists made several recommendations, including the need to develop and disseminate knowledge about human mobility due to climate change. They recommended supporting climate change mitigation and adaptation projects, and called for investment in social protection and parametric insurance mechanisms to mitigate shocks from loss and damage that are already unavoidable. Development actors were also called upon to finance restoration and rehabilitation mechanisms to remedy non-economic damages such as the loss of cultural heritage or biodiversity.

Finally, participants unanimously agreed that indigenous peoples are key actors in sustainable development. They represent 5% of the world’s population but are the custodians of 80% of the world’s biodiversity. They play a vital role on all continents – in the Amazon alone, they directly influence 48% of the land surface. The protection of the environment cannot and must not be done without them. They should be treated as true co-decision-makers in the management of these spaces and resources, in order to fully respect their free, prior and informed consent, as required under international law. Development actors should therefore seek to empower indigenous peoples by supporting the full enjoyment of their rights.