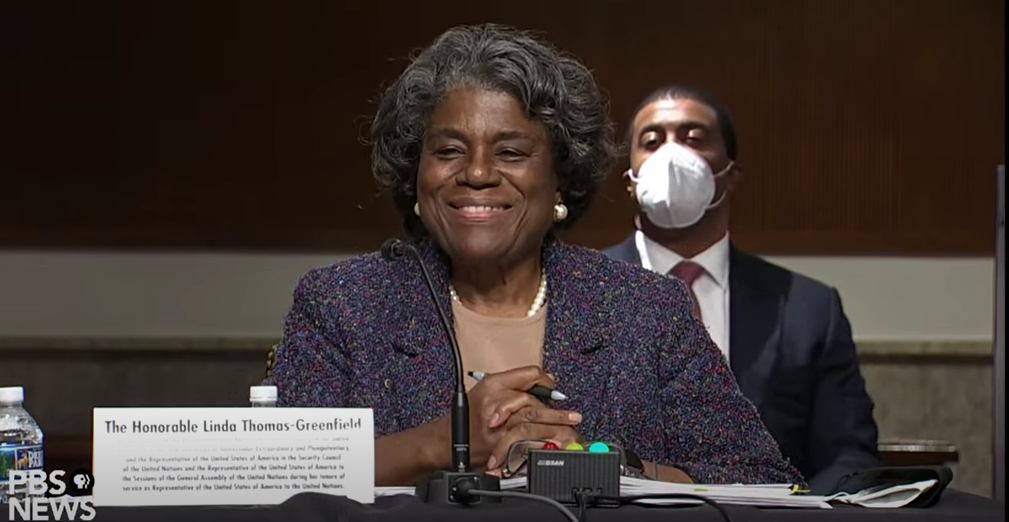 As United States President Joe Biden has been officially inaugurated, all eyes are on his cabinet nominees, as they are key to carrying out the President’s agenda. His pick for US Ambassador to the UN is Linda Thomas Greenfield, a career diplomat with over three decades of experience, holding previous posts as the assistant secretary for the Bureau of African American Affairs as well as US ambassador to Liberia. Her Senate confirmation hearing in the Senate Foreign Relations Committee was held on 27 January 2020, covered both thematic and country areas of concern for the US, and offered a glimpse into US international priorities. She, like recently confirmed Secretary of State Antony Blinken, has vowed to fight for international human rights and democracy through the return of an engaged US to international forums.

During her hearing, Thomas-Greenfield was clear about her top three priorities if confirmed: 1. That leadership must be rooted in core values of support for democracy, respect for universal human rights, and promotion of peace and security, 2. That the US must support reforms that make the UN more efficient and effective, and 3. That it is essential to develop a strong partnership with the US Senate.

Central to the confirmation hearing were topics of democracy and human rights. When pressed on what she would do against the ‘strategic threat’ China poses to the US, Thomas-Greenfield promised to call out China for crossing the line in regard to human rights abuses. She strongly condemned the ‘horrific’ atrocities that the Chinese Communist Party has committed against Uighur Muslims, and promised US support for Taiwan’s democracy. Likewise, she encouraged the US to proactively engage with African states by providing an alternative, through the US International Development Finance Corporation (DFC), to what she referred to as predatory Chinese lending practices. Thomas-Greenfield also made it clear that she would strengthen the US State Department to further the Biden administration’s stated goals to protect and promote democracy and human rights globally.

Thomas-Greenfield also committed to tackling the Russian government’s poisoning and arrest of opposition leader Alexei Navalny, and the subsequent crackdown on the mass protests following the arrest. The nominee also stressed that she understands the importance of working with Russia on topics of common interest, such as preventing Iran’s nuclear proliferation. Other humanitarian concerns for her include the civil conflict in Yemen and the closing of the crossing into Syria. She also expressed her hope to stop the civil conflict between Ethiopia’s government and the Liberation Front. Thomas-Greenfield planned to address these issues diplomatically by meeting with state leaders. She is also in favor of the US joining COVID-19 Vaccines Global Access (COVAX) to promote the equal distribution of vaccines around the world.

While the Ambassador did not discuss the Human Rights Council in detail, she reiterated concerns over the Council’s discrimination against Israel, a close US ally. Thomas-Greenfield promised to work with Israel and promote the Abraham accords in order to push other countries to recognise Israel’s rights at the UN.

During the hearing Thomas-Greenfield also committed to reasserting US leadership on climate change. She pledged to support President Biden and Climate Envoy John Kerry’s efforts to put climate change at the top of the international agenda through the upcoming climate conference, and address climate refugee crises, like the one caused by the expanding Sahara desert.

She is also committed to the Sustainable Development goals, particularly Goal 16 on good governance, as she noted that a country’s ability to root out corruption will greatly impact respect for human rights and quality of life of its citizens. Given that the US is known as a global leader, she hopes that the US will lead by example and galvanise the UN to be more effective in achieving the SDGs.

A common focus on multilateralism  and human rights

During his Senate confirmation hearing, Antony Blinken, Biden’s pick for Secretary of State, placed a similar emphasis on the importance of democracy, human rights, and renewed US international engagement. Blinken pledged a renewed US commitment on human rights, and has stressed his commitment to the global promotion of democracy and multilateralism. To this end, he has announced his repudiation of Pompeo’s Commission on Unalienable Rights, which parroted the talking points of illiberal governments by undermining respect for the rights of traditionally marginalised groups and attacking NGOs. He is also in favor of Biden’s global summit of democracy, which would address the challenges democracies currently face and work on a common agenda to defend democracy, combat corruption, and stand up for human rights.

Like Thomas-Greenfield, Blinken is also concerned about the humanitarian crisis in Yemen, and plans to propose an immediate review of the State Department decision to designate the Houthis in Yemen as a terrorist group, in order to facilitate the provision of humanitarian aid. He has stated that he would also designate the Chinese government’s treatment of Uighurs as genocide and hold the Chinese Communist Party accountable, with sanctions on the table.

The Senate Foreign Relations Committee will now vote to send Thomas-Greenfield’s nomination to the Senate. From her hearing and that of Blinken, Biden’s new team appears to be unified on the issues of human rights and democracy, and acknowledges the importance of international institutions to promote and protect these beliefs around the world. His picks for these critical posts appear to be committed to reasserting US leadership after former President Trump’s isolationist policies, including undertaking the responsibility of holding all States accountable for human rights abuses.