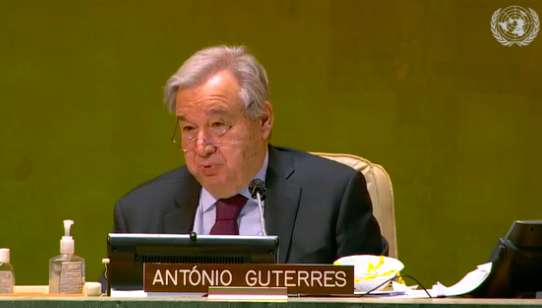 On 8 January 2021, UN Secretary-General António Guterres notified the General Assembly (GA) President Volkan Bozkir and Security Council President for January Tarek Ladeb of his intentions to run for re-election. On 23 March, Guterres sent his Vision Statement to Bozkir, and on 7 May, engaged in an informal dialogue with the GA. Given that Guterres will likely succeed in securing a second term, his vision and informal dialogue offer useful insight into his priorities for the UN, which include using his Call to Action for Human Rights as a blueprint for mainstreaming human rights in the UN system, as well as renewing attention on linking the UN pillars of development, peace and security, and human rights more closely together for the purposes of effective prevention. Commitments to promoting prevention, human rights, and equality all sound familiar, so what exactly do they look like this time around?

Guterres’ bid for re-election is likely to be short and successful. His good relationship with all the P5 members will save him from any veto against his bid and make him the likely nominee from all 15 member States of the UN Security Council. However, some civil society representatives and member States have expressed dismay that only one likely candidate has been submitted. While the selection process has historically been secretive, after repeated calls for increased transparency, in 2015 the GA adopted a resolution addressing the changes to be made to the selection and appointment of the Secretary-General. The 2016 election, which ushered in Guterres, was the first with the resolution in effect, and the first to feature public debates and speeches.

In December 2020, Costa Rica and Denmark, writing on behalf of the 25 countries of the Accountability Coherence and Transparency group, called on the UN to ensure that the 2021 SG selection process ‘meet the minimum standards of transparency’. The SG’s informal debate with member States on 7 May has been seen as a positive step for transparency, but the lack of additional candidates, particularly female candidates, has remained a concern. Guterres has also failed to shake criticism of what many perceive to be failure to speak out or act effectively in response to a number of serious human rights crisis over the last five years.

Guterres’ Call to Action for Human Rights, published in February 2020, may have been overshadowed by COVID-19, but in his Vision statement Guterres pitched the Call to Action as the central blueprint for the UN’s new approach to mainstreaming human rights. While the Call to Action remains imperfect, it does bring with it opportunities for, as Guterres put it, ‘maintaining the centrality of human rights’ in the UN system. Guterres pledged that the UN will engage with member States and civil society through the Human Rights Council and recommended that, in 2023, on the 75th Anniversary of the Universal Declaration of Human Rights, the UN hold a world conference on human rights and its links to peace and security and development. Guterres also stressed the need, in response to member State questions during the dialogue, to increase funding to the UN human rights pillar for it to function effectively.

Guterres has prioritised prevention throughout his tenure, and in his Vision pledged ‘more emphasis on prevention, putting in place a much more robust system of regional monthly risk reviews, senior decision-making, and stronger support to member States in managing and addressing crisis risks’. Stronger support to member States is a positive step, implying increased engagement and resilience building, but as to the other mechanisms mentioned, while improved risk analysis – and more coordinated decision making at senior levels – is welcome progress, it is the UN’s capacity to act decisively upon receiving indicators that has long been seen as a serious concern as well. More specificity from Guterres on improvements would have been welcome, given that these are promises Guterres has made before, but answers during the dialogue largely ‘stuck to the script’; when asked by a State how he would strengthen UN response to early warning signs of atrocities, Guterres responded ‘the real problem is early action’ – without providing much additional detail.

Richard Gowan, of the International Crisis Group, observed that while Guterres had promised a ‘surge in diplomacy for peace’ when he ran for SG in 2017, Guterres himself ultimately ended up referring to this as a ‘Sisyphean endeavour’ in 2021. Gowan has attributed Guterres’ cautious crisis diplomacy to both external concerns, such as divisions between great powers, as well as his desire to leave peacemaking to regional and local actors, and the need to invest political capital in other areas of focus, such as on climate change, technology, and in strengthening attention to prevention in other parts of the UN, such as the development pillar.

In his dialogue with the GA Guterres stressed that prevention needs to be holistic and consider the interconnected issues of human rights violations, inequality, and the symptoms of the climate crisis. While a holistic approach is of course very important, Guterres’ Vision can’t completely shake a largely security (and Security Council) focus on prevention, with human rights (and any of the pillars’ mechanisms) absent from the prevention section, and it is less explicit as to how this holistic approach will inform UN action beyond strengthening the knowledge of all UN sectors generally on prevention and protection standards. The argument that everything the UN engages in is prevention also runs the risk of rhetoric overshadowing or replacing actual planning and investment on specific prevention efforts.

The SG also acknowledged that while his systemwide reforms strengthened the UN’s development and peace and security pillars, in his second term he wanted to ensure a more integrated UN system ‘firmly underpinned by human rights,’ with stronger linkages between the UN’s three pillars being the ‘unfinished business’ of his reform process.

Almost immediately after being appointed Secretary-General, Guterres laid out his plan to reform the way the UN works and how it delivers its mandate. At the time there was concern that the term ‘human rights’ and references to the ‘human rights pillar’ were absent from the reform legislation, leaving only rhetorical commitments to creating linkages between the reinforced development and peace and security pillars, and the human rights pillar. It is significant that Guterres is now committing (albeit broadly) to compensate for this issue – yet it has technically been a central goal of the prevention vision and reforms overall since they were first launched. Presumably the Call to Action could help to repair these gaps left after the strenuous (and political) negotiation processes the UN reforms had undergone prior to their implementation. But this is a commitment the SG would need to be held to, as again it did not come to fruition in the last five years.

In both his Vision statement and informal dialogue with member States, Guterres also spoke of the need to reduce inequalities, both between States and within societies. He noted that inequalities are being exacerbated by the climate crisis and COVID-19 pandemic, while referring to education and digital technology as ‘the two greatest enablers and equalizers.’ He also called for the creation of a global task force for vaccine development and distribution, and for a future treaty on pandemics and guidelines with a level of authority that goes ‘beyond persuasion.’ On gender equality, he pledged to continue to work on gender parity within the UN and gender equality at the country level.

The climate crisis also featured prominently in Guterres’ Vision statement and informal dialogue with the GA – both in terms of the leadership he has pushed for the UN to take and the next steps required. Guterres proposed focusing next on climate, biodiversity, and pollution, including building on the Net Zero Coalition for 2050, and pushing for more involvement of non-State actors such as companies and civil society.

Guterres also noted that the planet was undergoing a ‘fourth industrial revolution’ with the rise of digital technology and acknowledged that large technology companies have emerged as geopolitical actors. Given this development, he expressed the need to involve nonstate actors, including through a strengthened Internet Governance Forum, to ensure robust implementation of the digital roadmap and follow-up to the report of the High-Level Panel on Digital Cooperation. Bringing non-State actors such as companies into high level conversations on technology will be critical, given that they also serve a function in safeguarding rights affected by their platforms and technology.

Guterres reflected that lack of access to digital technology constitutes a serious barrier to global equality, while also acknowledging that digital technology poses serious risks for violations of human rights, such as privacy rights. He stressed the need to safeguard ‘individual sovereignty’ in the digital space from data theft and manipulation by companies and governments. In his Vision, Guterres also briefly touched on the way in which ‘disinformation and other harmful practices have been deployed to serve political and commercial agendas, with a corrosive, divisive and polarising impact on societies.’

Despite this reference to the role of disinformation in exacerbating social and political tensions, Guterres does not mention democracy in his Vision, instead speaking more broadly about a wider distrust and dissatisfaction on the part of citizens with their governments. Given the global erosion of democratic standards and the rollback of rights that historically accompany slides into less representative government, it’s unfortunate that this did not receive more attention. Democracy and human rights (not limited to civil and political rights) are mutually reinforcing, and the unbridled rise of digital technology poses risks to democratic norms.

An interconnected world that stopped talking

Guterres did not shy away, in his Vision or dialogue with member States, from expressing frustration over the grim state of multilateralism. He argued that while the fundamental values of the UN Charter can be found in every region, a sense of solidarity and respect for international law is waning, and what is needed is a common agenda and way forward that all can agree to. A second ‘San Francisco’ agreement, if you will.

He also noted the paradox of technology, climate crisis and the pandemic showing an increasingly interconnected and interdependent world yet within which cooperation has become more challenging – and geopolitical relationships more dysfunctional. He stressed that the UN needed to help forge a new social contract built on dialogue and trust, and that a redistribution of resources at the global level will also allow developing countries to improve social contracts with their people.

In addition to improving relationships between States, Guterres pointed out in his dialogue that the UN has plenty of mechanisms to facilitate consultation with non-State actors but not to integrate their input into the work of the system; he concluded that to do so will require the will of member States.

Non-state actors such as private companies and civil society groups of all configurations will remain critical to solving problems that span borders, the (increasingly thin) digital/physical divide, and for progress within contexts with fraught social contracts.

In his Vision, the SG noted his commitment (in accordance with A/RES/75/1) to present a report in September on how to advance ‘our common agenda.’ This report will offer critical insight into Guterres’ plan for how the UN can build a new social contract, and the role of human rights in that process. Efforts to mainstream human rights in the UN’s work are welcome – as long as such efforts are consistent, bold, include State and civil society engagement, and recognise that respect for human rights (and the norms and standards set by international human rights covenants and agreements) is fundamental to building social, political and economic resilience within and amongst States – which is the most sustainable form of prevention.