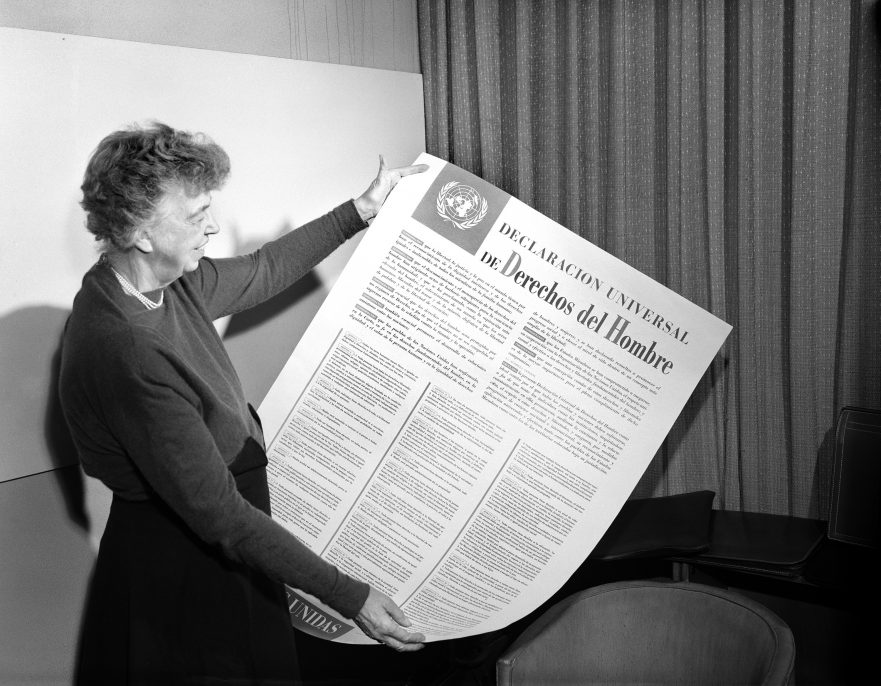 Today, 10 December, is Human Rights Day. It was on this day in 1948 that the UN proclaimed the Universal Declaration of Human Rights as a common standard of achievement for all peoples and all nations.

Human Rights Day this year is being commemorated at a time when the present and the future are joined together as perhaps at no other time in the history of the UN. The world is simultaneously facing a range of critical human rights crises, including a global pandemic, a biodiversity crisis, a pollution crisis, and a climate crisis. The human rights challenges presented by these crises overlay existing discrimination and inequality.

The Universal Declaration of Human Rights provides the reference points, the frame of principles, for thinking through, formulating, and implementing policies on challenges such as these. It is a crucial document for every country.

The first principle is the right to life, enshrined in article 3 of the Universal Declaration: ‘Everyone has the right to life, liberty and security of person.’ That includes the inhabitants of Small Island States at risk of being submerged beneath rising seas or battered by more frequent extreme weather events.

The second principle is the right to dignity, enshrined in article 1 of the Universal Declaration: ‘All human beings are born free and equal in dignity and rights. They are endowed with reason and conscience and should act towards one another in a spirit of brotherhood.’ The dignity of every person is inviolate. Poverty assaults the dignity of those caught in its vice-trap.

The third principle is equality, enshrined in articles, 2, 6 and 7 of the Universal Declaration: ‘Everyone is entitled to all the rights and freedoms set forth in this Declaration without distinction of any kind, such as race, colour, sex, language, religion, political or other opinion, national or social origin, property, birth or other status.’ (article 2).  ‘Everyone has the right to recognition everywhere as a person before the law.’ (article 6). ‘All are equal before the law and are entitled without any discrimination to equal protection of the law. All are entitled to equal protection against any discrimination in violation of this Declaration and against any incitement to such discrimination.’ (article 7).

The fourth principle is the rule of law, enshrined, among others, in article 10 of the Universal Declaration: ‘Everyone is entitled in full equality to a fair and public hearing by an independent and impartial tribunal.’ The rule of law must be respected everywhere. In many countries it is not.

The fifth principle is gender equality, enshrined in article 16: ‘Men and women […] are entitled to equal rights as to marriage, during marriage and at its dissolution […] The family is the natural and fundamental group unit of society and is entitled to protection by society and the State.” Gender equality, alas, is still far from reality in many parts of the world.

The sixth principle deals with participation in governance, enshrined in article 21: ‘Everyone has the right to take part in the government of his/her country, directly or through freely chosen representatives […] The will of the people shall be the basis of the authority of government. This will shall be expressed in periodic and genuine elections which shall be by universal and equal suffrage and shall be held by secret vote or by equivalent free voting procedures.’  Article 27 adds that everyone has the right to freely participate in the cultural life of the community, to enjoy the arts and to share in scientific advancement and its benefits. Alas, the will of the people is trampled upon in many parts of the world.

The seventh principle, stated in article 28, is that ‘Everyone is entitled to a social and international order in which the rights and freedoms set forth in this Declaration can be fully realised.’ We clearly do not yet have such an international order. And numerous countries lack the social order called for.

The eighth principle, stated in article 25, is one which, alas, is grievously breached in numerous parts of the world: ‘Everyone has the right to a standard of living adequate for the health and well-being of himself/herself and his/her family, including food, clothing, housing and medical care and necessary social services, and the right to security in the event of unemployment, sickness, disability, widowhood, old age or other lack of livelihood in circumstances beyond his/her control.’ Should not every parliament discuss as a matter of the utmost urgency how this provision is being implemented and hold the government accountable against this provision?

*The author previously performed the functions of UN High Commissioner for Human Rights, Chancellor of the University of Guyana, Professor at the Geneva Graduate Institute of International and Development Studies, and Commissioner of the International Commission of Jurists.