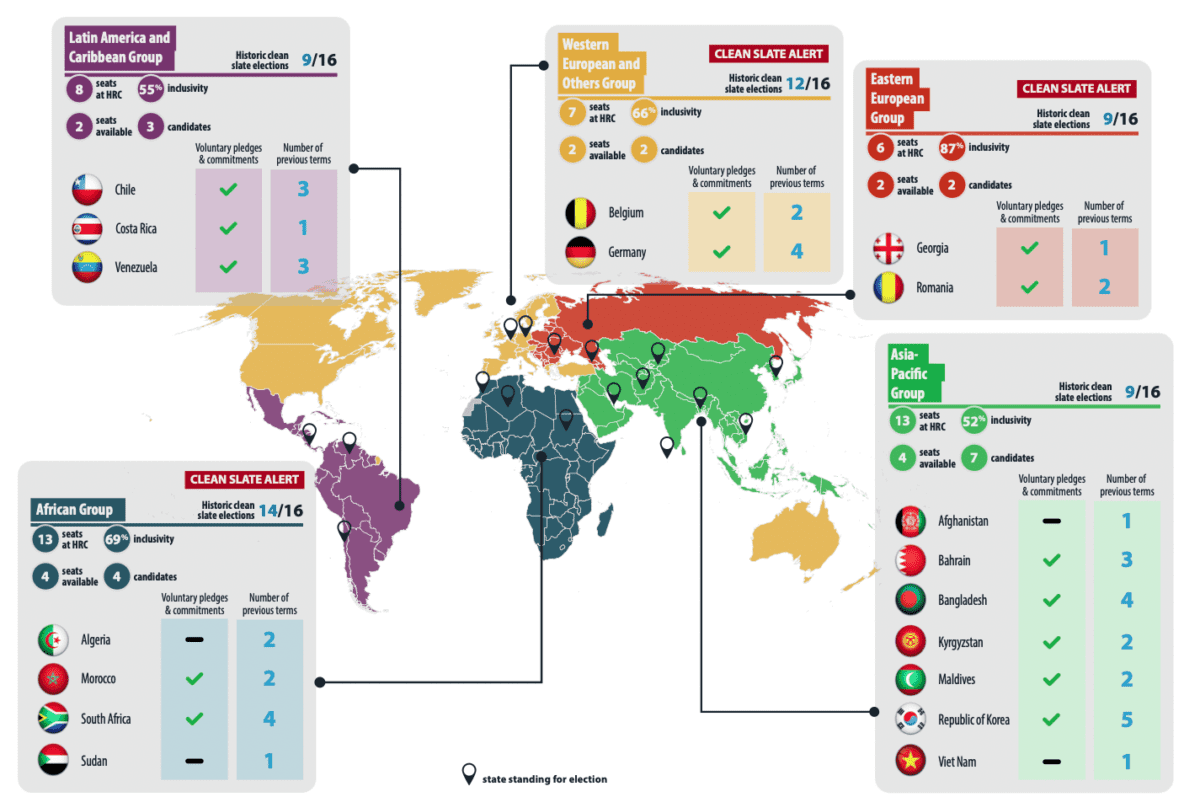 On 11 October 2022, the UN General Assembly (GA) in New York convened to elect new members of the Human Rights Council for the term 2023-2025. As soon as the votes were cast and members elected, diplomats and civil society representatives, as always, began to ask themselves whether the newly composed Council (which will sit from 1 January next year) will be better or worse than the outgoing one?

To answer this question objectively, it is instructive to compare the human rights records and commitments of incoming members (as measured against the criteria and election set out in GA resolution 60/251) with those of outgoing members. To assist in such an analysis, URG has used its recently published 2022 yourHRC.org election guide.

A key initial question to ask is: were the newest members of the HRC elected based on human rights considerations?

Of all AG States, only South Africa maintains a standing invitation to Special Procedures, however, the other States that do not maintain a standing invitation appear to have stronger records of cooperation regarding both acceptance and completion of visits and response rate to communications.

Of the four States, Algeria has the highest level of cooperation with the UPR, while Sudan has the lowest. Both Algeria and Morocco were mentioned in the UNSG report on reprisals, and both responded to allegations.

Of the APG States elected to the Council in 2022, the Maldives and Kyrgyzstan maintain standing invitations to Special Procedures. The elected State with the lowest number of votes (Kyrgyzstan) has the highest rate of acceptance or completion of Special Procedure visit requests, while the State with the highest number of votes (Bangladesh) tied for the lowest response rate (with Afghanistan).

Of the APG candidates elected, Bangladesh and the Maldives were mentioned in the SG report on reprisals; both responded to allegations.

In what may be a failure to take into account the election standards under resolution 60/251, the Republic of Korea, which was not elected (123 votes), appears to have the strongest record of cooperation with the UN system. It maintains a standing invitation to Special Procedures and has completed or accepted 87% of visit requests and responded to 79% of communications, and has submitted five periodic reports (including two on time) under the core conventions, and does not have any outstanding reports. It was further not mentioned in the report on reprisals.

Both States maintain standing invitations to Special Procedures and have strong records regarding visit requests, with Georgia completing or accepting almost 90% and Romania 100%; Georgia has a stronger record of responding to communications, however, with 100% of communications responded to.

Both States have submitted four periodic reports under the Treaty Bodies, and Georgia submitted one on time. Georgia had a significantly higher rate of participation in the third cycle of the UPR than Romania. Neither were mentioned in the report on reprisals.

In the second contested slate, both elected States maintain a standing invitation to Special Procedures. Venezuela, which was not elected, does not. Both Chile and Costa Rica have strong records of accepting and completing Special Procedure visit requests, but Chile has a stronger record of responding to communications; while Venezuela had a lower percentage or accepted or completed visit requests (29%), it held the strongest record of response to communications of all GRULAC candidates at 81%.

Both candidates maintain standing invitations to Special Procedures and have strong records regarding visits and communications. Further, both Belgium and Germany have strong periodic Treaty Body report records, as neither has an overdue report and both have submitted two reports on time.

While Germany has the higher rate of participation in the UPR, both have strong records of participation throughout the three cycles. Neither State was mentioned in the report on reprisals.

Will the new Council membership be stronger or weaker?

Objectively speaking, therefore, it seems that members of the GA did, overall, elect candidates with better human rights records and levels of cooperation. The main exception to this rule was the Republic of Korea, which was not elected despite a strong performance over time.

Subjectively too, it appears that the GA did a good job of returning a stronger Council membership for the term 2023-2025.

Those countries leaving the Council at the end of this year and that did not or could not seek re-election included Armenia, Brazil, Indonesia, Japan, Libya, Marshall Islands, Mauritania, Namibia, Netherlands, and Poland. Again, based on human rights records, voting records, and levels of cooperation, it is estimated/predicted that: