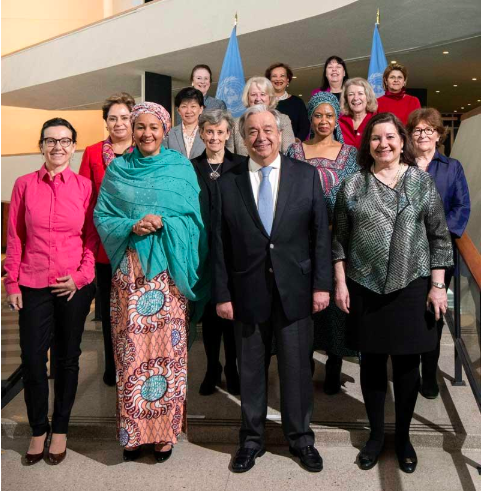 This post is the fourth in a series of blogs produced by the URG-NYC team to take stock of the implementation of the UN reforms, which were adopted in the past 18 months. This post covers the place of gender in the UN reforms.

One of the stated objectives of the United Nations reform is to enable member States to achieve the Sustainable Development Goals (SDGs) and to prioritise conflict prevention. As such, it would be expected that women’s empowerment and gender equality be thoroughly articulated in the three areas of reform: management, development and peace and security. This has not been the case. The terms gender, women, or gender parity are not mentioned in their respective resolutions. However, the UN Secretary-General has introduced several initiatives aimed specifically at promoting gender parity and streamlining gender perspectives in the UN’s work. For example, the system-wide Gender Parity Strategy and the Enabling Environment Guidelines for the UN system seek to ‘create a working environment that embraces equality, eradicates bias and is inclusive of all staff.’ UN agencies have also sought to leverage the UN reforms to better promote gender perspectives. How exactly has women’s empowerment and gender parity been addressed by the Secretary-General’s reforms? What initiatives have been implemented to promote gender equality? Where do human rights fit into this conversation?

Gender parity was one of the first priorities set out by the Secretary-General upon taking office. Back in December 2017, when the Secretary-General put forward his report on repositioning the UN development system, he stated that the system’s investment in women’s equality and empowerment was inadequate. The report also mentioned that the UN is working towards a people-centred approach that incorporates human rights and gender equality as critical components. UN Women has been fully engaged in the ongoing reforms, and the repositioning of the UN development system in particular. Their main objective is to strengthen the UN system’s position on gender equality and women’s empowerment. They have made some adjustments in anticipation of the changes brought about by the reforms, such as focusing on enhancing their ability to contribute to the work of UN country teams, and making certain that gender equality features heavily in the new UN Cooperation Framework (previously the UN Development Assistance Framework). They are also supporting the reforms by placing emphasis on the new division of labour between the Deputy Executive Directors, and avoiding the duplication of work as well as removing operational silos.

In relation to the peace and security reform, the Gender, Peace and Security Team was established to offer technical support on issues related to gender, women, peace and security. They will also continue to work closely with the Gender Team in the Department of Peace Operations to ensure a holistic approach to these issues through their distinct mandates. UN peacekeeping has had issues of sexual abuse in the past. Sexual violence within UN peacekeeping not only causes lasting harm to its victims, but also degrades the overall moral compass of the United Nations. Resolution 2272 was adopted in response to the allegations of sexual violence, and it reinforces the Secretary-General’s authority to replace members of peacekeeping missions who have partaken in this form of abuse. In accordance with this, the Peace and Security pillar has been restructured to include gender more comprehensively. The Department of Political and Peacebuilding Affairs and the Department of Peace Operations are keeping their respective specialized gender capacities with the goal of ensuring the gender mainstreaming at all levels and in all areas of the Organization’s work.

In 2018, the Secretary-General introduced the Action for Peacekeeping (A4P) initiative, which brought to attention many aspects that needed restructuring, including increased women’s participation in peace operations and greater emphasis on the overall gender perspective of the pillar. More than 150 member States have signed onto this initiative. Since 2015, the number of women in uniform has only increased by 1%. The Uniformed Gender Parity has set targets for 2028 to increase the number of women in peace operations. Despite senior leadership close to achieving gender parity for the first time in the history of the UN, the same cannot be said with regards to the peace and security pillar. In reference to this gap, the Secretary-General stated, ‘[w]e need to bring the same spirit to our peace operation. This is crucial for our effectiveness, credibility and reputation.’ A4P consisted of a Declaration of Shared Commitments, that the Secretary-General shared and encouraged member States to endorse. It included the Gender Parity Strategy; the Women, Peace, and Security Agenda; and the Voluntary Compact on the commitment to eliminate sexual exploitation and abuse. Also in this initiative is the Gender-Responsive Peacekeeping Operations Policy, which, according to the Secretary-General, promotes, ‘leadership and accountability both for gender equality and for the women, peace and security agenda.’

UN Women supports efforts to transform the Women, Peace and Security agenda from policy into practice. According to the Secretary-General, the involvement of women is ‘a key element in the maintenance of international peace and security.’ Furthermore, evidence has proven that having more women peacekeepers results in more efficient protection responses. It has also been seen that having more women within troop contingents lowers the rate of sexual exploitation and abuse and increases the reporting on gender-based violence. UN Women also supports the Gender Parity Strategy by providing updates on the status of women in the UN system to ensure equal representation of women in all UN agencies.

Although the Gender Parity Strategy has contributed to greater equality—with the Senior Management Group as well as Resident Coordinators nearly reaching full parity (as of September 2018)—there are still improvements to be made, particularly with regards to female leadership within the UN. Indeed, Gender Parity is more than just numbers. As stated by the UN Under-Secretary-General and UN Women Executive Director, Phumzile Mlambo-Ngcuka, in the opening remarks at the UN Women Executive Board First Regular Session in 2019, ‘[a]ddressing parity and workplace culture is not only about gender balance—it is also about ensuring an inclusive and supportive work culture for all, free of abuse of authority.’

In 2019, the Enabling Environment Guidelines for the UN system were published as part of the ongoing reform process. The guidelines focus primarily on three areas: flexible working arrangements, family-friendly policies and standards of conduct. They acknowledge that in order for circumstances to really change for women in the workplace, a drastic cultural change must take place. By offering flexible working arrangements, and family-friendly policies, not only does this favour staff retention, by assisting them in balancing their professional and personal lives, but it is also an attractive characteristic for new applicants.

Regarding the standards of conduct, the Secretary-General has emphasized that sexual harassment has no place in the UN. The Investigations Division of the Office of Internal Oversight Services is responsible for investigating all complaints in relation to sexual harassment. A team was set up to specifically deal with sexual harassment cases in 2018. By the end of the year, more than 16,000 UN staff members had undertaken a mandatory training course on sexual harassment. However, sexual harassment seems to be a continuing problem within the UN, as shown in a recently released survey indicating that one-third of UN staff and contractors claim to have experienced sexual harassment in the last two years. In response to these statistics, the Secretary-General stated, ‘we still have a long way to go before we are able to fully and openly discuss sexual harassment.’ These guidelines demonstrate that gender equality should be taken seriously, and that gender norms are forever changing and evolving. For instance, the family-friendly policies recognize the importance of the father in a child’s life, as well as the mother.

It is safe to say that many gender issues are addressed by the three UN reforms, as well as through the standalone Gender Parity Strategy. All reports include a gender analysis, and there is an effort to strengthen the language specifically on gender. The EU and the UN joined forces to form the Spotlight Initiative, which aims to eliminate violence against women and girls, and complements the SDGs. There is also more attention on the danger that women human rights defenders face on a daily basis, with the UN Special Rapporteur on the situation of Human Rights Defenders, Michel Forst, stating, ‘women who defend and promote rights are often the first to come under attack.’

However, there is considerable room for improvement. It is important to question whether women’s rights would have had been more profoundly impacted had the reforms extended to the human rights pillar. Indeed, gender streamlining would have benefitted from a human rights perspective. The reforms must thoroughly acknowledge and address gender issues and gaps, or otherwise risk underperformance. Women and girls should not be left behind. In order to achieve positive and lasting change for women, parity is critical, as this will lead to institutional transformation, which will lead to the inclusion of more voices and positive results on the ground.

Featured image is from the United to Reform page: Gender Parity