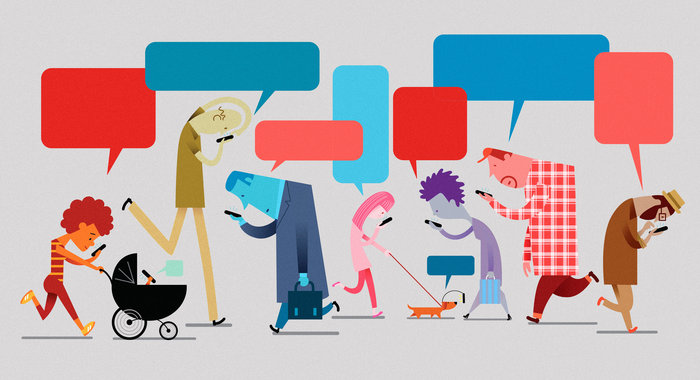 On 30 July, the Pew Research Center released a report that revealed that one in five Americans use social media for their primary source of news. This report comes at a time of both an intense news cycle, dominated by the COVID-19 pandemic and a fast approaching US presidential election, and when social media usage is at an all-time high. It also highlights a changed news ‘ecosystem’ in the US with a more prominent role for social media – and thus greater responsibility for social media companies in tackling disinformation and hate speech, particularly when it comes to coverage preceding and during the US presidential election in November.

On July 30, the Pew Research Center published a new report revealing that one in five Americans primarily get their news from social media, and that this group are less engaged and less knowledgeable than other groups of news consumers. According to Pew, as of late 2019, ‘18% of U.S. adults say they turn most to social media for political and election news. That’s lower than the share who use news websites and apps (25%), but about on par with the percent who say their primary pathway is cable television (16%) or local television (16%), and higher than the shares who turn to three other pathways mentioned in the survey (network TV, radio and print).’

Pew also found that US adults who rely predominantly on social media are also less likely to follow major news stories such as COVID-19 and the 2020 presidential election, while also being more likely than other Americans to have encountered false claims or conspiracy theories. Yet according to Pew: ‘Just over a third (37%) of those who rely on social media for political news said they were “very concerned” about the effects made-up news might have on the 2020 presidential election, lower than for all other groups except those who get political news from local TV.’ At the time and by contrast, ‘half or more of those who get most of their news through other platforms said they were very concerned about misinformation in the news ecosystem and its possible impact on the presidential election.’

Those reliant on a steady diet of social media feeds were less likely to be knowledgeable about key issues (in this case, COVID-19 and the upcoming election, of obvious relevance to every American), more likely to encounter conspiracy theories, and less likely to recognise the dangers of misinformation. Social media has not just become a rising source of news for Americans, its content appears less linked to more traditional hierarchies of news stories, as traditional news sources continue to be awash with COVID-19 updates, but rather to the personal preference (and potentially purchasing preferences given its deals with Google) of the consumer, without the consumer’s ability necessarily to consciously sift through or shape it.

The importance of social media, both as a direct line to and source of information for voters, has not escaped the presidential candidates. According to Fortune, the campaigns of both presidential candidates are heavily engaged with social media, spending millions on adds on Facebook and Google while often using these adds to actually criticise social media platforms. Trump has accused Twitter of interfering in the election through flagging his misleading posts, while Biden has criticised Facebook for allowing Trump to make false claims on the site. This is a significant departure from 2016, when the candidates focused far less on the role of social media platforms.

This already contentious election may now be decided predominantly through ‘no excuse required’ mail-in ballots. While this method has the support of at least two thirds of Americans, conspiracy theories and misinformation about the election have already rocketed across social media platforms, amplified in some cases by sitting President Trump.

Twitter and Facebook have both banned misinformation related to mail-in voting and have pledged to shut down domestic and foreign networks bent on election interference. Back in 2019 Twitter banned all political ads and pledged to strengthen their rules ‘against deliberate attempts to mislead voters to now explicitly prohibit manipulating or interfering in the election process. This includes posting or sharing content that may suppress voter turnout or mislead people about when, where, or how to vote.’ Other social media companies and apps are also taking steps; on August 4th WhatsApp launched a factcheck feature aimed at viral messages.

In an interview with The New York Times, Facebook chief executive Mark Zuckerberg indicated that the site planned to educate users, ‘getting people ready for the fact that there’s a high likelihood that it takes days or weeks to count this — and there’s nothing wrong or illegitimate about that’ adding that Facebook is ‘considering new rules regarding premature claims of victory or other statements about the results.’

One Facebook tool that may not play a role in the fight against election-related disinformation – the widely heralded Facebook Oversight Board. The Board was presented as, in effect, a global first: a private sector-led human rights ‘Treaty Body’ designed to monitor Facebook’s  compliance with international human rights standards. In an interview with the BBC, a member of the Oversight Board, Alan Rusbridger, said that while it would be ‘great’ for the Board to be active prior to the US elections in November, he did not yet know whether the Board would be ready to make recommendations ahead of the Presidential election, adding that he did not believe they should ‘rush’. This comes despite calls for the Board to be weighing in on whether Facebook should follow Twitter in flagging Trump’s misleading or inciting posts.

But the issue of whether Twitter and Facebook are doing enough to combat disinformation ahead of the election must also involve hate speech. Political disinformation campaigns, external or domestic, intentional or organic, often make use of targeted outreach intended to disseminate conspiracy theories and misinformation and to amplify racially divisive hate speech.

While Twitter and Facebook have both taken steps to combat hate speech, a recent incident in the UK demonstrated that neither approach has been fool proof. At the end of July, Twitter and Facebook (as the owner of Instagram) faced backlash for failing to remove, in a timely manner, content by British artist Wiley that included conspiracies and hate speech about Jewish people. The platforms received criticism from the British government and American Jewish Committee, and Chief Rabbit Ephraim Mirvis wrote letters to Twitter and Facebook stating that: ‘Your inaction amounts to complicity.’ Despite efforts taken by these companies, this incident demonstrates both the considerable work that remains, as well as a strong public desire from multiple corners for stronger regulation of hate speech on these platforms.

Less than 100 days until the election

American journalists, media companies and news programs now face the question of how to transition from their usual election night routine, traditionally resplendent with colours, graphics, countdowns, news flashes, and, depending on the election, nail-biting suspense, to days or weeks of absentee ballot counting. There doesn’t seem to be consensus of how the 24-hour news cycle, and social media, will be able to manage a possibly lengthy, unusual election process. Humility, serious consideration, and potential collaboration with election experts and human rights advocates, is called for.

Given the Pew Center’s report, and the reporting done by others in this area, it is clear that social media plays a significant part in the American news ecosystem. Traditional news media and social media companies have a responsibility to recognise their role in shaping the perceptions and even decisions of voters, to ensure the right to access dispassionate and accurate information about the election (which will be critical not only to ensuring free and fair elections, but also how the election results are perceived). Recognising the importance of freedom of expression will simultaneously mean rising to meet the challenges of combatting hate speech and considering the role that hate speech can play in disinformation campaigns aimed at voters.