On Tuesday 2nd December, on the occasion of the United Nations Forum on Business and Human Rights, the UK Mission to the UN in Geneva held a reception at the UK Ambassador’s residence for ambassadors and business executives, jointly sponsored by the Norwegian Ministry of Foreign Affairs, the Economist Group and the Universal Rights Group. 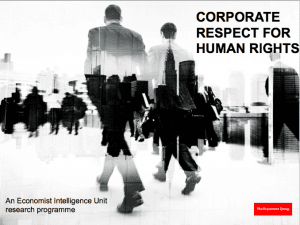 Monica Woodley, Editorial Director of the Economist Intelligence Unit (EIU), presented the preliminary results of the EIU survey on Business and Human Rights, jointly sponsored by Universal Rights Group, and a number of other key partners (see below). The presentation drew on a global survey of 534 business executives, from all UN regional groups and across 18 sectors.

The business and human rights survey is ongoing, and the EIU is also now conducting in-depth interviews with experts and senior executives to explore some of the findings. The research results will ultimately be presented in a report, due to be published in January 2015. 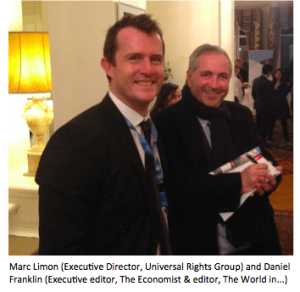 Another highlight of the event was Daniel Franklin, Editor of The Economist’s annual “World In…” series, presenting “the world in 2015,” and discussing what we can expect to see in 2015: the potential triumphs and pitfalls, and their impact on business, politics and society around the globe. Among other landmarks, 2015 will see the Chinese economy overtake the US economy, the number of active mobile phones outstrip the number of people in the world, the number of tablets overtake the number of laptops, and was the year Marty McFly travelled to in Back to the Future II!

Mark Matthews (Ambassador and Deputy Permanent Representative to the United Nations and other International Organisations in Geneva) and Jo Swinson MP, (UK Minister for Employment Relations and Consumer Affairs in the Department for Business, Innovation and Skills and Women and Equalities Minister) alsomade short interventions at the event on the subject of business and human rights.

> Presentation of preliminary results of the EIU survey on Business and Human Rights, 2nd December 2014

> More information on the EIU survey on Business and Human Rights

The EIU survey on Business and Human Rights is being sponsored and supported by: