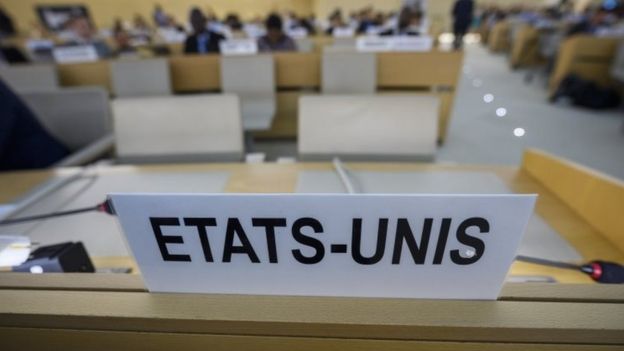 On July 16, the US State Department Commission on Unalienable Rights, tasked with providing ‘advice on human rights grounded in [U.S.] founding principles and the principles of the 1948 Universal Declaration of Human Rights,’ released its draft report. Policy, legal, and rights experts have since opined on the Commission’s problematic conceptual approach.  The report’s conclusions on the UN human rights system should also be of deep concern for rights advocates in the U.S. and beyond.

While the Commission report lauds international human rights institutions – likely referring to treaty bodies – for their ‘constructive roles in monitoring, supervising, and monitoring human rights obligations,’ it goes on to clarify they are ‘rife with serious flaws.’ The report criticises the bodies for their ‘lack of democratic legitimacy inasmuch as they vest enormous discretion in the professional elites who staff their permanent bureaucracies.’ Most concerning, is the report’s charge that these bodies are ‘subject to interest-group capture.’

This coded language inescapably refers to NGOs and the advocacy community and is worrisome for three reasons.

First, it builds a bridge to the report’s perspective that ‘[the U.S.] maintaining a position of selective constructive engagement with international human rights institutions is reasonable.’ This flips the foundational principal – that states should not be able to pick and choose which human rights standards to follow – on its head. For the Commission, the U.S. should only engage rights mechanisms that it alone deems worthy.

Second, NGO bashing, in a government-sanctioned report, is especially insidious given the prevailing international political context. Freedom House has documented a 14th straight year of decline in political rights and civil liberties globally. Similarly, a March 2020 report from International Service for Human Rights finds, ‘the vital human rights objective of unhindered cooperation with UN human rights mechanisms is undermined systematically by many States, whose strategies include reprisals, intimidation and other obstacles aimed at creating fear or blocking access.’ In a time when civil society faces intense threats at home and while attempting to engage the UN, the Commission’s report sounds the alarm that NGOs apparently are too powerful.

Third, while the report does not clarify what ‘interest groups’ it is referring to, the text conspicuously calls abortion, affirmative action, and same-sex marriage ‘divisive social and political controversies’ in the country. A nearby passage in the report laments ‘the temptation to cloak a contestable political preference in the mantle of human rights . . . to choke off democratic debate.’

To accept these arguments would be to dismiss decades of human rights precedent at the UN – and other international rights organs – relevant to the human dignity and fundamental freedoms of billions of people globally. This includes efforts that the U.S. has previously and painstakingly backed with its allies and partners both in government and civil society relevant to combatting discrimination based on sexual orientation and gender identity as well as advancing sexual and reproductive health and rights.

Under the heading ‘the failings of international organisations,’ the report also dismisses U.S. engagement at UN Human Rights Council, implicitly justifying Washington’s withdrawal from the body in 2018. ‘The U.S. withdrawal from the UNHRC does not reflect a rejection of human rights and fundamental freedoms, but rather a determination to find better means of effectively securing them,’ it notes. The report goes on to levy familiar arguments of the Trump Administration against the Council.

On membership, the report notes ‘flagrant human rights abusers — such as China, Cuba, Libya, Russia, Saudi Arabia, and Venezuela — participate in, and even dominate, the Council.’ This picture of dysfunction is misleading and off by over ten years.

Of the Commission’s list, only Libya and Venezuela are current Council members and they hardly operate as Council overlords. Russia was actually defeated in a Council election in 2016, the first time Moscow failed to get a seat on a top UN human rights organ in seventy years.

Beijing’s influence and attempts at affirmative agenda setting are certainly growing. According to experts, however, this is one result of U.S. disengagement from the UN.

The report also mentions the ‘extensive efforts’ of the U.S. to reform the Council before withdrawing.

The text does not mention that the U.S.-led reform effort under the Trump Administration did not garner a serious backing, even among its core allies in New York and Geneva, due in part to concerns that inadequate preparation was done to prevent the effort from being co-opted by rights violating governments. The Commission report also does not mention a series of events where the U.S. went on the offensive against more than a dozen prominent human rights NGOs in the aftermath of the collapse of an attempt to ram through a reform resolution in the General Assembly in New York. In short, everyone wants a Council-strengthening strategy, but not one that leads to backsliding. The Commission misses this nuance, throwing out the baby with the bathwater.

The report also calls out the Council’s ongoing structural anti-Israel bias. Nowhere, however, does it cite the empirical evidence concluding that U.S. participation on the Council, not sitting on the sidelines, has acted to help counter this structural deficiency.

Readers of the Commission report are left with concluding observations that are, at best, contradictory and, at worst, dangerous. While the report notes ‘it is urgent to vigorously champion human rights in foreign policy,’ ‘the power of example is enormous,’ and even ‘economic and social rights are essential to a comprehensive foreign policy,’ these noteworthy bright spots are overwhelmed by two final north stars for U.S. policymaking.

One is the text’s conclusion that the ‘United States should respect the independence and sovereignty of nation-states to make their own moral and political decisions that affirm universal human rights within the limits set forth in the UDHR’ (referring to the Universal Declaration of Human Rights), which is followed by the awkwardly worded and generalised reminder that ‘freedom-loving nations rightly employ the full range of diplomatic tools to deter nation-states that abuse their sovereignty by destroying the very possibility of the exercise of human rights by their people.’

In sum, the Commission simultaneously raises alarm about NGOs and special rapporteurs running amok in the UN human rights machinery while at the same time charging that a small group of states have effectively hijacked its agenda, an inconsistency difficult to reconcile. It paints an antiquated picture of the Council that eclipses the body’s upward trajectory on country-specific and thematic issues. Its proposed alternative, a national sovereignty-rooted approach to universal human rights that is fearful of ‘new claims of rights,’ risks mortal damage not only to the U.S. legacy of global human rights leadership but also infecting other government’s policymaking as well.