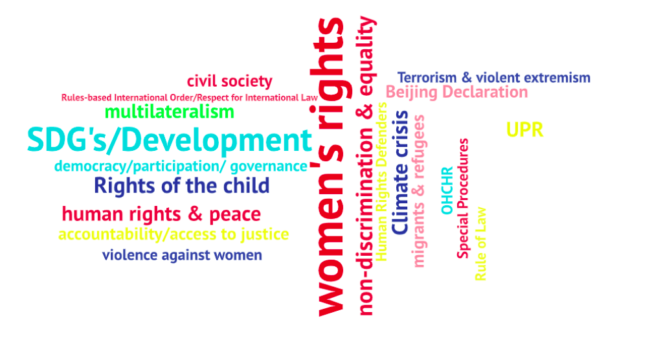 The High-Level Segment of the 43rd session of the UN Human Rights Council, held from 24 to 26 February 2020, saw the active participation of more than a 100 world leaders, including, four heads of States, around 90 ministers or vice-ministers, and a number of principals of international organisations. In the statements they delivered to the Council they addressed both domestic human rights concerns, developments and achievements, as well as their countries international priorities in the human rights sphere for 2020 and beyond. As such, the participation of High-Level representatives presented an opportunity to assess the level of attention and prioritisation given by various States to specific human rights topics.

The URG has analysed the content of the more than 100 speeches delivered during the High-Level Segment in order to identify the issues that are on top of the human rights agenda for 2020. The results of this analysis are presented below in a number of ‘word clouds’, where the size of the word reflects the total number of mentions of the relevant topic/situation. URG has identified a total of 143 topics that were highlighted by at least four different State Representatives during the High-Level Segment. These topics were grouped in six different categories and URG has generated individual word clouds for each of them. The categories are as follows: institutional topics related to the UN human rights bodies and mechanisms; civil and political rights; economic, social and cultural rights; groups in focus; country or regional situations; and cross-cutting themes. In addition, URG identified the ‘top 20’ most frequently mentioned themes across all categories, which is represented in the first word cloud.

Expressing concern over the push back against human rights and multilateral institutions both in rhetoric and in practice, several representatives expressed their enduring commitment to the rules-based international order and the associated international human rights system. National implementation of human rights-related recommendations and obligations was also central to the discussions. Two additional cross-cutting trends could further be identified: the impact of new technologies in the protection, promotion and fulfilment of human rights, both online and offline; and an increasing attention to the prevention mandate of the Human Rights Council, with many dignitaries highlighting the important role human rights and the Council can play in the prevention of human rights crises and conflicts. In this regard, speakers pointed to how human rights violations often serve as early-warning signs of the impending outbreak of conflict and social instability. 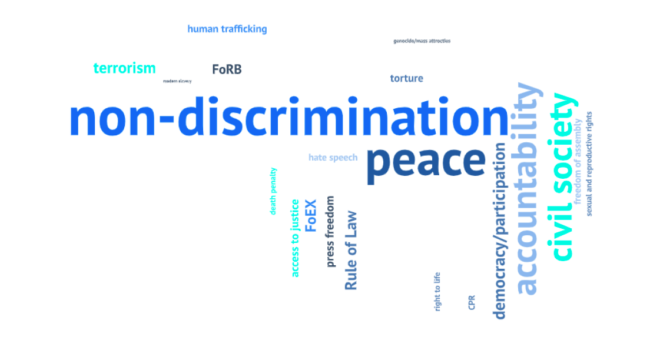 In the area of civil and political rights, a majority of dignitaries raised concerns over the rising number of instances of discrimination, intolerance, xenophobia and racism. Various States highlighted that these problems are at the heart of challenges related to the rise of extremist and terrorist groups. Another topic that received considerable attention was the importance of promoting accountability and fighting impunity for perpetrators of human rights violations. The lack of accountability for human rights violations was argued to pose a significant risk to peace and stability, as well as to the credibility of the human rights system at large.

With regards to Economic, Social and Cultural Rights, the emphasis on the intrinsic relationship between human rights and sustainable development brought attention to the related challenges of combatting poverty, fighting inequalities and constructing inclusive societies. In addition, the impact of the climate crisis on the enjoyment and fulfilment of human rights was repeatedly noted. Several States affirmed that climate change not only represented a serious existential threat to humanity, but also negatively affected the enjoyment and promotion of various human rights, including the rights to health, food, water and development.

Besides the promotion of gender equality and women’s rights, States also brought attention to other relevant specific groups, as the word bubble for the ‘group in focus’ category demonstrates. The rights of the child received attention from an impressive number of States, particularly as the Convention on the Rights of the Child reaches its 30th anniversary. In addition, the increase in migration flows and displacement in the last years was not neglected, as several representatives made reference to their efforts to protect and promote the rights of refugees and migrants.

In the category of UN human rights bodies and mechanisms, the Universal Periodic Review was highlighted by several representatives as a central mechanism for the protection and promotion of human rights. The possibility of having peer-to-peer exchanges of best practices as well as recommendations to ensure improvement of domestic situations was regarded as effectively advancing human rights around the world. The need to ensure independence and adequate funding for the OHCHR was also remarked upon by several States. On different occasions, representatives made reference to the positive work done by the OHCHR and Special Procedure mandate-holders on various human rights issues.

With regards to country or regional situations, the armed conflict and humanitarian situation in Syria was the most discussed by State representatives. The situation in the Occupied Palestinian Territories also drew significant attention. Finally, the situation in Myanmar and the plight of displaced Rohingya was also among those most commented during the High Level Segment, notably through references to the recent ICJ ruling.