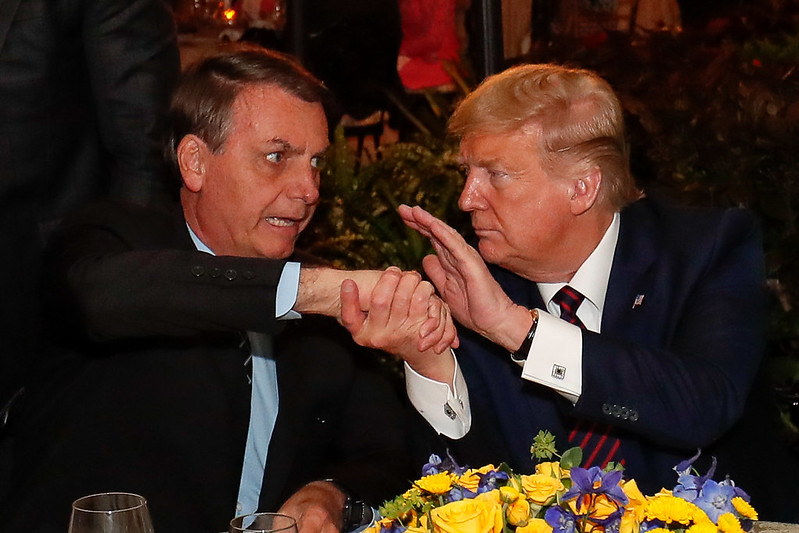 The rise of populist leaders around the world, with their particularly Orwellian brand of post-truth politics, has been one of the defining geopolitical trends of the past five years. From Trump to Orban, Bolsonaro to Johnson, and Erdogan to Modi, these politicians have seemed to carry all before them. Yet perhaps they have finally met their match in COVID-19?

Although the rule does not hold true across the board (in Hungary, for example, Victor Orban has responded to the pandemic by curtailing human rights and democratic institutions – with apparently positive results in terms of infections and COVID-related deaths), in the most part countries governed by (democratic) populist leaders have seen some of the world’s most chaotic and ineffectual responses to the current global health pandemic.

According to the Financial Times[1] (data updated on 24th May), the countries with the highest number (cumulative) of cases of COVID-19 are the US (over 1.6 million cases), Brazil (over 360,000 cases) and the UK (around 260,000 cases). The same three countries, together with India and Russia, also take up the ‘top’ five spots for ‘new confirmed cases.’ Turning to the tragically high number of people around the world who have lost their lives due to COVID-19, the US (around 100,000) and the UK (almost 37,000) have suffered the highest number of total deaths; and the US (1,155 average deaths per day), Brazil (935 average deaths per day) and the UK (308 average deaths per day) have suffered the most ‘new deaths.’

The common definition of populism is ‘a political approach that strives to appeal to ordinary people who feel that their concerns are disregarded by established elite groups.’ This definition has two clear elements: one, populist politicians strive to appeal to ‘ordinary people’ or even just to ‘the demos’ more broadly; and two, that they are somehow ‘anti-establishment’ – i.e. they defend and promote the interests of the forgotten or neglected ‘plebeians’ as against the out-of-touch ‘patricians.’ Whatever the precise definition, populist politicians in all cases seek to win and retain power by pitting one part of the population against another part (based on faith, race, immigrant status, political views, wealth, etc.) – or, in many cases, one population against another population (i.e. nationalism) – and by positing that a distant and/or corrupt ‘elite’ or ‘establishment’ is bent on thwarting the ‘will of the People.’

By extension, populist leaders, according to their auto-ideology, can take whatever steps are necessary to secure this ‘will of the People,’ even where those steps run counter to human rights, democratic norms and the rule of law (e.g. the UK Government’s decision to prorogue Parliament in order to secure Brexit), and even when it is necessary to lie or promote deliberate misinformation (e.g. President Trump’s only passing acquaintance with facts). On both points, anyone who seeks to defend democracy and the rule of law (e.g. opposition politicians, independent judges), or who seeks to reveal the truth in a ‘post-truth’ world (e.g. journalists), are – by definition – ‘elitist,’ ‘corrupt’ or ‘antidemocratic.’

Is COVID-19 the ‘Achilles’ heel’ of the world’s populists?

For much of the past five years and in many (if not most) large, powerful UN member States, this potent mix of populism, misinformation (and a related determination to tell ‘the People’ what they want to hear), incitement to division and hatred, nationalism, and disregard for human rights and the rule of law, has at times appeared unstoppable. In America, for example, the rule of law has appeared to repeatedly give way under the weight of Donald Trump’s populist attacks against the free press (or ‘fake news media’ as he calls them), the Mueller probe into foreign collusion, and Congressional impeachment proceedings. In the UK, another country that previously prided itself on its commitment to the rule of law, Boris Johnson and his allies in the ‘Vote Leave’ campaign have repeatedly used populist slogans about ‘the establishment’ (e.g. opposition politicians and the civil service), the ‘out of touch elite’ (e.g. judges on the Supreme Court) or the ‘corrupt’ media to justify and facilitate a policy (Brexit) which every reputable study shows will harm the economic and social rights of the very ‘People’ they purport to defend.

Yet such populist politics appears to have hit a brick wall during the COVID-19 pandemic. Not only have countries governed by the world’s ‘strong men’ fared far worse than comparable countries elsewhere in terms of infections and deaths, but the spell that has held ‘the People’ entranced for so long appears to be lifting. Why?

There appear to be a number of reasons.

First, during the coronavirus pandemic, the consequences of the policies championed by populists are both stark and irrefutable. Unlike Trump’s policy towards Ukraine, for example, or Boris Johnson’s promises to rebuild a ‘free’ and ‘sovereign’ country post-Brexit, the results of the political choices made by governments in Brasilia, Istanbul, New Delhi, London and Washington over the past four months can be precisely (and fairly immediately) measured – in the numbers of infections and the numbers of deaths.

Second, populist leaders prefer ‘gesture politics’ to evidence-based decision-making, and soundbites to carefully-calibrated policy responses. Such impulses are usually underwritten by excessive optimism and a belief that they and their country are somehow ‘special.’ During the current pandemic, such attitudes have led to complacency – a form of cognitive bias that makes the individual believe they are less likely than others to be hit by an emerging crisis. Examples of this have abounded during the current pandemic. For example, in January Donald Trump said he had the situation ‘totally under control’ and ‘it’s going to be great,’ while in February he claimed the virus would ‘miraculously go away,’ and that ‘the risk to the American people is very low.’ In the UK in early February, Boris Johnson spoke of the ‘risk that new diseases such as coronavirus will trigger a panic and a desire for market segregation that go beyond what is medically rational to the point of doing real and unnecessary economic damage.’ At such a moment, he went on, ‘humanity needs some government somewhere that is willing at least to make the case powerfully for freedom of exchange, some country ready to take off its Clark Kent spectacles and leap into the phone booth and emerge with its cloak flowing as the supercharged champion, of the right of the populations of the earth to buy and sell freely among each other.’ ‘Here in Greenwich in the first week of February 2020,’ he concluded, ‘I can tell you in all humility that the UK is ready for that role.’

“…humanity needs some government somewhere that is willing at least to make the case powerfully for freedom of exchange, some country ready to take off its Clark Kent spectacles and leap into the phone booth and emerge with its cloak flowing as the supercharged champion.”

Third, populists have, by definition, an antagonistic relationship with ‘science’ and with ‘experts’ – because, in short, scientists work to determine testable facts and those truths often do not fit within (and indeed, often directly contradict) the narratives pushed by politicians like Jair Bolsonaro. During other crises such as those around Brexit in the UK or Ukraine in the US, populists have been able to more easily discount the words of experts because they can be posited as predictions of one possible future or as being ‘politicised’ or ‘corrupt.’ A good example is UK Conservative politician Michael Gove’s assertion that Britons ‘have had enough of experts’ (those experts were eventually proved correct – but that only became months later). In contrast, the words of health experts during the COVID-19 crisis are more difficult to discount – and are more immediately provable. This tension has been clearly in evidence in both the US (e.g. disagreements between Trump and Dr Anthony Fauci, the country’s senior expert on infectious diseases), and in Brazil, where President Bolsonaro fired one health minister for calling for stricter social distancing measures, and saw another resign in protest at the Government’s decision to prioritise economic recovery over public health. It has also been evidence through the claims of both the Brazilian and US Presidents – firmly rejected by scientists – that a particular drug, chloroquine, could be a ‘miracle cure’ for COVID-19.

Fourth, and linked with the above, the reliance of populist politicians on ‘fake news’ – deliberate misinformation – has gone from being a useful (if immoral) tool in normal times, designed to distil complex political questions into simple ‘the People against the establishment’ narratives, to being a serious handicap during a global health emergency. During such times, when people’s lives are at stake and they are fearful for the future, the public demand clear and honest guidance rather than scapegoating or calls to national prayer (as happened in the US on 15 March).

“…perhaps the most important aspect of the ‘Achilles’ heel’ of populists revealed by the COVID-19 pandemic is their overriding desire to be popular.”

Lastly, and again building on the previous points, perhaps the most important aspect of the ‘Achilles’ heel’ of populists revealed by the COVID-19 pandemic is their overriding desire to be popular. This means, amongst other things, offering a permanently optimistic or ‘upbeat’ analysis of the situation, and refusing to take (or at least procrastinating over) difficult decisions that may risk making the leader in question less popular – either in the short-term (e.g. enforcing national lockdowns or ‘taking away the ancient rights of the British people to go to the pub’ – in the words of Boris Johnson), or in the long-term (e.g. prolonged economic recession).

With the above in mind, it seems fair to say that the world’s populist leaders ‘have not had a good crisis.’ The only question that remains is: has COVID-19 permanently damaged their brand, or will its effects by more fleeting? We’ll have to wait until November to find out.