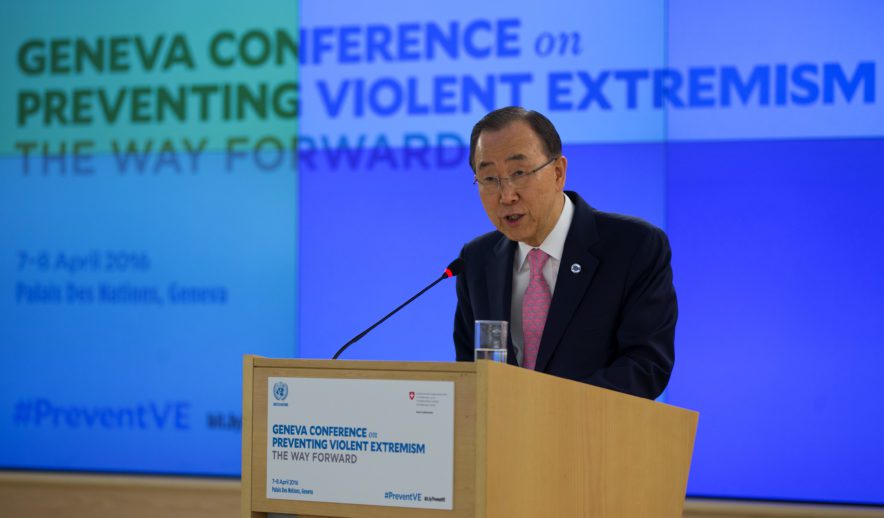 When the United Nations was established in 1945 one of its fundamental ambitions was to create a world that wasn’t plagued by religious and racial persecution and discrimination. In the aftermath of WW2, the mantra of never again, was continuously used to represent the new commitment to the protection of religious and minority rights. This immediately began to manifest itself in international law and policy in Article 2 of the Universal Declaration of Human rights. It is therefore curious how in 2019 a prevalent theory that one of the predominate causes of violent extremism is the consistent, daily discrimination, and alienation of religious and ethnic minorities in both the developed and developing world. This represents a departure from previous theories that posit ideological/theological factors at the centre of the radicalisation process. This transition in the theories of what causes violent extremism has gone hand in hand with the transformation in policy from Counter Violent Extremism (CVE) to Preventing Violent Extremism (PVE). CVE policies, which started to form in the post 9/11 climate, have had hundreds of millions in global investment and yet have done little to stem the flow of violent extremism. Their vague definitions, questionable methods, and policies based on little empirical evidence have not only failed but arguably exacerbated the ‘root causes’ of violent extremism.

The United Nations Development Programme 2015 report on PVE has substantially contributed to this transition, showing how daily discrimination has significantly contributed to the rise of radicalisation and violent extremism. This is not just limited to Muslims within Europe, but Syrians in Lebanon, Somali’s in Kenya and many more around the globe. In order to combat violent extremism, it is essential to understand the real ‘root causes’ rather than using CVE methods of ‘targeting’, surveillance, and manipulation of Muslim communities. However, it is equally as important to understand how 74 years of constant declarations, resolutions, treaties, forums (and more) on religious tolerance and minority rights, aimed at creating inclusive unified societies, have led to a climate where discrimination is leading to the largest numbers of violent extremist attacks and levels of radicalisation in decades.  Universal Rights Group’s 2014 Report “Combatting Global Religious Intolerance” highlighted the disconnect between international and domestic policy. Resolutions such as RES 16/18 have seen very little ‘on the ground’ impact on the levels of religious discrimination worldwide.

Recent Developments: The Rise in Discrimination and Violent Extremism.

Since the report, the last few years have seen record high levels of displaced peoples, refugees, and asylum seekers, with 25.4 million refugees in 2017.[1] The 1.8 million refugees that have arrived in Europe since 2014 have directly contributed to an increase in the discrimination of minorities and religious groups. This has been represented by the rise in popularity of right-wing nationalist parties and groups across Europe, including the Front National in France, the Freiheitliche Partei Osterreichs in Austria, and the Lega in Italy. A PRRI 2018 survey showed that 75% of Muslims 18-24 in the United States feel that discrimination against them has increased in the last 12 months. The Second European Union Minorities and Discrimination Survey found that 27% of all Muslims experienced daily discrimination based on ethnic origin or an immigrant background.

This combined with CVE ‘targeting’ policies make it unsurprising that minority and religious groups feel alienated and vilified. The UNDP report highlights a number of regions/States, including Somalia and Nigeria, where “targeting or profiling groups or entire communities, over time, provokes a violent reaction”.

This is clearly not a ‘western’ issue and 2016 saw the highest global levels of religiously motived harassment since 2007, occurring in 187 countries, an increase of 18 from the previous year.[2] A 2019 paper shows a correlation between the rise of religious discrimination and the rise of religious conflict in sub-Saharan Africa. A further scientific study[3] by UCL and the Universitat de Barcelona showed a direct correlation between social exclusion  and an increased capacity for violent and religious extremism. Since 2010 there has been little decline in the number of terrorist attack and fatalities per year have more than trebled.[4] Furthermore, the number of attacks in Europe has more than doubled since 2014.[5] Clearly there has been both a rise in discrimination, as well as a rise in radicalization and violent extremism, and a new understanding of the root causes of terrorism may explain this relationship.

With the increasing refugee crises and miss migration, the growing global attitude of Us vs Them has led to the growing levels of discrimination and religious persecution. With PVE research showing a trend in daily human rights violations causing radicalization, it is become increasingly important to analyse the causes of this actual and perceived discrimination.  This needs to be used to create comprehensive realistic action orientated policies on how to prevent state sponsored discrimination and how to create social cohesion in developed and developing societies to halt radicalization and prevent violent extremism.

Furthermore, there is a clear need to reinvigorate the Istanbul Process in order to continue to create a unified international strategy to promote and provide religious tolerance in every corner of the globe.  This also interlinks with the United Nations 2030 Sustainable Development Agenda where tolerance plays a key role in its accomplishment. This will take the form of an upcoming policy brief by Universal Rights Group that will give a deeper insight it to discrimination, radicalization and preventing violent extremism along with a strategic policy plan for States.