World leaders have called for an ambitious long-term sustainability agenda to succeed the Millennium Development Goals (MDGs) at the end of 2015. The post-2015 development agenda is expected to address the unfinished business of the MDGs. Requested by UN Member States to pull together inputs from all strands on the post-2015 development agenda, the UN Secretary General presented on 4 December 2014 an advance version of the synthesis report “The Road to Dignity by 2030”. The report channels the results of an unprecedented open and transparent global conversation and intergovernmental process that considered a broad range of recommendations, key reports, peoples’ voices and viewpoints from a wide swath of sectors and stakeholders.

The Secretary General, in his report, reinforces that the post 2015 development agenda must advance human rights equally for all, in full coherence with international standards and not fall below international human rights law. In his perspective, the post 2015 development agenda must mirror the broader human rights framework on civil, political economic, cultural right and the right to development especially for disadvantaged groups. The report, thus, strongly suggests integration and links together the different pillars of the United Nations namely human rights, peace and security and development. This pushes back against some Member States, which viewed this process as only a traditional development agenda. The Secretary-General’s acknowledgement of the relevance of existing human rights law and standards is a principled stance that it is hoped that Member States will replicate in deciding the final agenda.

However, the Synthesis Report misses an opportunity to illustrate how these previously agreed and well-defined human rights obligations carry over into development in practice. For instance, insufficient attention is given to translating human rights rhetoric into concrete proposals on how to realize them with respect to the development of targets and indicators, financing, means of implementation, monitoring and review of the agenda.

Furthermore, the report makes mention only one time to women’s rights and this reference to women’s reproductive health and rights” fall short of SDG targets adopted by governments in the Open Ended Working Group outcome document. The SDGs called for the “elimination of all forms of violence against women” while the SG report only pushes for “zero tolerance”. The report lacks a wider analysis of social norms that influence and perpetuate gender inequality making it difficult to see how the isolated initiatives it does propose can succeed or deliver a transformative agenda. Moreover, through out the synthesis report “women and children” are treated together and such an approach fails to recognize the distinct strategies required to address the rights, needs and inequalities of each.

On the transformational approach, while supporting the 17 Sustainable Development Goals (SDGs) put forward by the Open Ended Working Group on Sustainable Development, the Secretary General proposes six essential elements of dignity, people, planet, prosperity, justice and partnership as a way of framing this complex agenda.

SIX ELEMENTS FOR DELIVERING THE SDGS 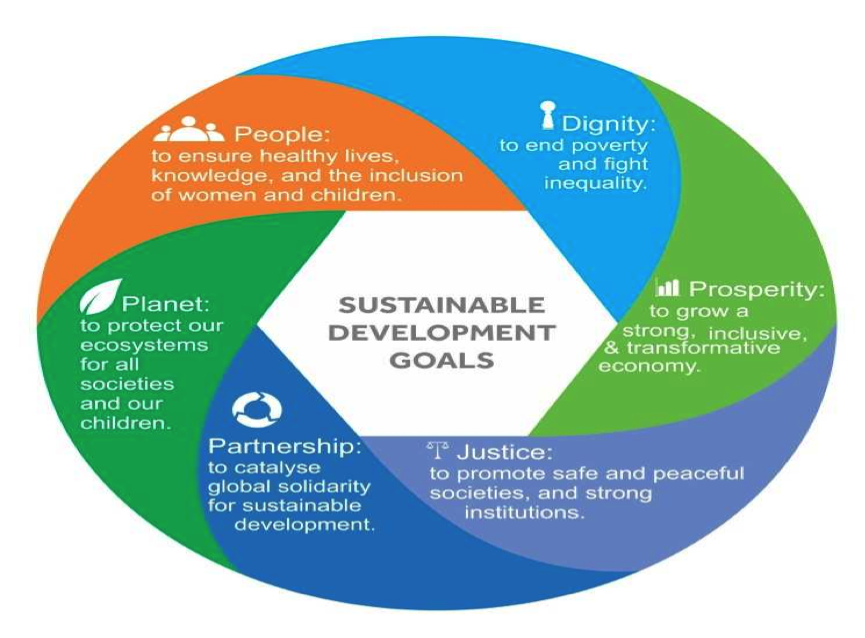 It is not however clear how the proposed six elements would integrate into the 17 SDGs and keep the balance between the three UN pillar i.e development, peace and security and human rights. Again there is a risk that in next’s year intergovernmental negotiations, human rights may be left out or forgotten in the final outcome.

The SG’s vision of a “new paradigm” – of the accountability of all actors to the world’s people as the “real test of people-centred, planet-sensitive development” (para 146) – is an inspiring one.

The proposal lays out the essential elements of a reviewing and reporting regime with five elements – three levels of accountability structures: country-level, regional, and global, and two additional components: a thematic component and a component addressing the global partnership for development.  It is clear that these, in some configuration, are key elements of an effective and realistic accountability structure. Overall, though, more must be done – in the content of each component and the relationships between them – to achieve a strong enough foundation for the achievement of this “new paradigm”.

Whilst the SG’s proposal is a good start, it is not clear that it establishes a universal review mechanism, so much as a number of separate ones. More work is needed to address how the three levels and two additional elements are interlinked. For example, it is not clear what the themes underpinning the thematic component should be, or how much already exists by way of accountability in each thematic sphere.

Seventy years ago, in adopting the UN Charter, Governments made a solemn commitment “ to save succeeding generations from the scourge of war, to reaffirm faith in fundamental human rights, in the dignity and worth of the human persons, in the equal rights of men and women…..”. As stated by the Secretary General at the beginning of his report, we are at a historic cross road and the direction we take will determine whether we will succeed or fail. Transformation is our watchdog and the leadership of Member States is needed to ensure that the outcome of the SDGs negotiations is built on the three pillars of the United Nations.